Beyond the Bunnies - Why Easter is for Grown Ups

Easter, where have you been all my life? I will be 37 on Good Friday, but only today did I get round to inquiring into what the Easter story might mean for those who genuinely wanted to know.

I am grateful to some Christian friends (you know who you are) who have helped in various ways with our work on spirituality for sharing their insight to help me think this through. It turns out that Easter has philosophical and psychological layers most people never reflect on, and with all due respect, it's several orders of magnitude more interesting than Christmas. 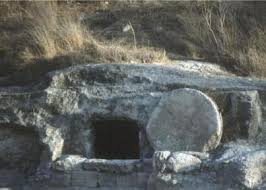 But these ideas at the heart of Easter are for grown ups. They are deep, dark, and difficult, and they make most sense to those who have been round the block enough to deeply know pain and the recovery from pain, and recognise this recurring pattern in our lives and the lives of others. The meaning of the Christmas story is relatively straightforward by comparison, and an easier one for children to grasp. So a warning: if you are expecting sweetness and light manifest as chocolate eggs or bunny rabbits, look away now.

At first blush the story makes no sense. The 'son of God'(who?) dies in excruciatingly sadistic and vinegary pain while nailed to a wooden cross by the terrestrial baddies du jour to 'save us from our sins' (how?) and this singularly important(why?) celestial person(what?) is entombed in a stone cave. Just then, when this apparently appalling thing that remains confounding on a number of levels has happened, he miraculously comes back to life, removes the stone that kept him entombed, and is back amongst us; his resurrection proof that he really is the son of God (yes, that again...) and that, therefore, somehow, all is well.

Like most of the people reading this post, I am culturally Christian. I've heard versions of this story hundreds of times before and have never really developed a position on whether it 'actually happened' or felt that I needed to. Some Christians might say that's a cop out, because if it did happen, it was this particular historical event, and not 'the enlightenment' that was, as Professor Tom Wright puts it 'The greatest turning point in history'.

For now though, to be consistent with most of our other work on spirituality, I'm going to try to 'keep the tension' (as chess players put it) on the fundamental but also fundamentally contested questions of literal, historical truth, and focus on core themes from the story that have broader human application:

Nietzsche one wrote: "There was only one Christian, and they killed him." That's another story, another argument, but it captures the darkness and bleakness of the moment Jesus is killed very well. This touchstone of light is not only effectively tortured and humiliated, but through his death it appears that all light and all hope is well and truly snuffed out.

Easter therefore says: a life fully lived will feature suffering, not just a little bit, and it won't always make sense at the time. There will be moments where you feel utterly forsaken, and that is not imaginary. But it is not the whole story either.

Whether or not you 'believe' in God (or know what it means not to) you will know that the Christian conception of God is one who is both loving and just, and that's not an easy trick for anybody (yes, even God) to pull off. The Easter story is arguably about the possibility of squaring this circle. God didn't just allow the baddies to 'get away with it'; he allowed it to happen because he saw further and deeper.

Some say the heart of the story is about our terrifying capacity to turn away from what we need to look at. We would rather crucify the truth than recognise it as the truth. Our work on 'stealth denial' on climate change was not inspired by Jesus(!) but it was an attempt to capture this sentiment - the truth is often deeply uncomfortable and we will go to great lengths to get away from it. If there was a way we could 'kill' climate change, rather than deal with it, we probably would.

Tolkien coined the term 'eucatastrophe' as an antonym for catastrophe, because he wanted to highlight the reality of those moments where all seems lost, but suddenly and miraculously, the ring of power finds its way into the fires of mount doom; the seemingly dead come back to life; the incurable cancer inexplicably disappears.

Easter is about holding on to the paradox that, as Mark Vernon put it to me: "When all seems lost - really, truly, bleakly - all is found..."

The quietly brilliant Chris Oldfield put it to me that Easter, like Christmas, is a celebration of embodiment over elegant abstraction and virtual reality. It's about "The scandal of Incarnation overcoming excarnation (as Charles Taylor might put it)." This point, has interesting resonances with Guy Claxton's lecture at the RSA in our spirituality series. There is no spirituality, however you define it, without the body.

A curious detail of the story, again indicated by Chris, is that it is female disciples who are the witnesses to the empty tomb. The male disciples basically don't believe them "because their words seemed to them like nonsense" (Luke 24). There is apparently a lot of Biblical scholarship on this issue, connecting the male response to this important but discomforting news to modern day unhelpful stereotypes about 'hysterical women'.

You can see Easter as being about emptying yourself to be filled with something more than ego; to die to your false self to connect with your truer deeper self. For those who can't follow the story back to Christian belief and practice, this idea alone is an important one. Psychologically and existentially, we often need to lose ourselves to find ourselves.

A relatively conventional but important interpretation, is that the Christian God is fundamentally about second chances. New life can come even to the completely lost or bereft, and sometimes more than once.

For all that I said about not debating the literal truth, it is worth ending with a powerful quote (HT Chris Oldfield) that says, actually, whether we are culturally or religiously Christian, we do need to decide what we feel about 'the truth' of the resurrection:

From Tom Wright on: 'Grave matters'; why the resurrection is not a 'take it or leave it thing':

I'm not sure what I think about that, but I mean it when I say: