Thinking of the UK as 'post-Christian' is surprisingly helpful.

You may have noticed the media have recently been interested in the question of whether Britain is a Christian country. The story went something like this:

Prime minister David Cameron let it be known that his famously unreliable celestial radio reception has improved and not only does he 'do God' but suggests that more of us should do the same: "I believe we should be more confident about our status as a Christian country, more ambitious about expanding the role of faith-based organisations, and, frankly, more evangelical about a faith that compels us to get out there and make a difference to people's lives."

The President of the British Humanist Association, Professor Jim Al-Khalil writes a well crafted and succint letter supported by notable signatories suggesting that the Prime Minister's remarks were inappropriate: "At a social level, Britain has been shaped for the better by many pre-Christian, non-Christian, and post-Christian forces. We are a plural society with citizens with a range of perspectives, and we are a largely non-religious society."

The commentariat then explored the question and most sensible people realise that 'to some extent', 'depends what you mean' and so forth are the only credible answers, which is hardly a huge surprise, but still leaves a lingering sense of discomfort that the question hasn't quite been answered. 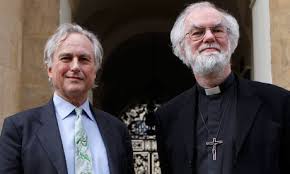 (A Post-Christian Gathering? Rowan Williams and Richard Dawkins, image via The Guardian.)

This weekend, the former Archbishop of Cantebury, Rowan Williams stepped in with a subtle but very helpful distinction:

"If I say that this is a post-Christian nation, that doesn't mean necessarily non-Christian. It means the cultural memory is still quite strongly Christian. And in some ways, the cultural presence is still quite strongly Christian. But it is post-Christian in the sense that habitual practice for most of the population is not taken for granted...A Christian nation can sound like a nation of committed believers, and we are not that. Equally, we are not a nation of dedicated secularists. I think we're a lot less secular than the most optimistic members of the British Humanist Association would think."

This basic analysis seems sound to me, and the way the story above unfolded makes much more sense when you see it through a post-Christian lens. More generally, I find the 'post-Christian' framing useful, because it captures the sense that the UK is culturally Christian, but not exclusively or exhaustively so and makes sense of various attempts to move 'beyond' Christianity, while still being rooted in it.

Finally, I realise now that  when I wrote the seminal piece for the RSA project: Spirituality, Tools of the Mind and The Social Brain, I was thinking in a post-Christian manner:

"...Being spiritual can mean safeguarding our sense of the sacred, valuing the feeling of belonging or savouring the rapture of intense absorption. And then there is the quintessential gratitude we feel when we periodically notice, as gift and revelation, that we are alive...Such experiences do not depend upon doctrine or on institutional endorsement or support(...)But it is unfortunate that those who value spiritual experience and practice are often suspiciously quick to disassociate themselves from belief in God and religion, as if such things were unbearably unfashionable and awkward, rather than perhaps the richest place to understand the nature of spiritual need."

Much more could be said, but it seems to me that the 'post-Christian' framing is helpful in lots of ways. In response to Rowan Williams's timely intervention I therefore say, Amen!

Dr Jonathan Rowson is Director of the Social Brain Centre at the RSA and tweets here.