The power to crate

I've had an interest in craft beer ever since an American bar opened near me and started importing a new breed of craft beers. Then came the breweries. At least a dozen have opened near me in the last three to four years. They are all pretty good. What has become increasingly apparent is I have just been seeing a particularly energetic aspect of what is a global movement. And it's a movement that says a lot about what is happening to our society.

Much has been written on these blogs about the growth of the maker movement driven by new technologies such as 3D printing with supporting online apps. Concurrently, there has been a spread of home brewing culture as well as the growth of the craft beer industry. It seems clear that we are seeing two facets of a similar process- the desire to create or in this case, with apologies, the desire to crate.

Yet, the spread of craft beer culture is not driven by a new invention per se. The basic technology would be recognisable to a medieval monk. The internet is critical of course: it has facilitated a global conversation about craft beer, hop varieties, techniques (there are thousands of YouTube clips covering every aspect of the process). The culture has, to my knowledge, flourished in the UK, US and Japan. Even the real ale enthusiasts have been blind-sided by this movement, stuck between embrace, simple toleration and sniffy disdain. Few ever joined Camra to be on the edge of trend. This explains the confusion I'm greeted with when I explain I have an interest in craft beer and I've even started brewing my own – it’s no longer the preserve of old men.

This movement is only just starting to touch the mainstream. It will do and it will have won when it's no longer acceptable to only sell Bud at £4 for a 330ml can (here's looking at you Secret Cinema).

Speaking of Bud and the other brewing giants, something rather interesting has been taking place. The infographic below charts the growth in the UK and the US.

Here is the recent growth of US craft beer production from the Brewers Association: 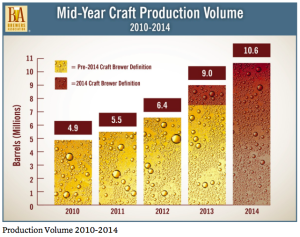 And here is the growth of breweries: 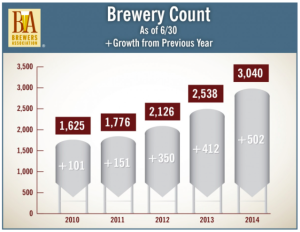 And here is the UK growth from SIBA:

So what is driving this growth? Tax breaks have helped but it's broader still. New global communications flows have also aided and abetted the growth but there’s something even beyond this. It is about identity and globalisation. People are rejecting a version of globalisation that is universalising and lowest common denominator. Instead, they are using the tools of globalisation to spread knowledge and ideas but then using these ideas to creatively adapt themselves and their communities. It is a paradox of our times that as we globalise we search for deeper and more authentic forms of identity simultaneously.

Craft beer is infinitely varied. So are the people who consume and make it. Making and consuming is a form of self-expression and the gap between the two activities is narrowing. In this, the necessity for any power to create philosophy to embrace connected diversity and reject universal mediocrity will be core. Ben Dellot discusses Bertrand competition elsewhere on these blogs today and concludes that experience and quality are the routes to sustaining value in a hyper-competitive age. This is precisely the strategy deployed by craft brewers. There is a neat intersection between those who make and those who consume too with constant feedback and role swapping.

There is a search for genuine quality, authenticity and uniqueness in a world of global supply and distribution chains. Big beer cos are emblematic of this conforming globalisation. Can there be any greater demonstration of the need for creative destruction? And as Mother Jones reports this week, the big beer cos are losing some ground and beginning to do what they always do, buy up the competition.

What is even more intriguing is the innovation in business models within craft brewing. Employee-owned, living wage employers tap into the ‘America beyond Capitalism’ spirit. As has been covered here on a number of occasions, the lively experimentation that is taking place in the metro under-growth is worthy of some serious attention. Beyond brewing, there are signs are that people are increasingly accepting less in order to sustain a better quality of life. Craft beer costs at least double a standard beer in the shops but you are buying a product to enjoy rather than a delivery mechanism for a popular drug. Similarly, people are choosing to earn less but live more as our survey on self-employment shows. This has consequences for national productivity (and when we have a whopping national debt that has to be something of a concern). But it might well feed into a better quality of life for many – or at least those who are voluntarily entering into a different set of working arrangements as opposed to being coerced into it.

With these challenges in mind, there is nonetheless quite an exciting set of opportunities here. And remember, the early home computing pioneers were members of the Homebrew Computing Club. That spirit is becoming more widespread not just in brewing but baking, making, cooking, coding, generating power, and sharing spare rooms and vehicles. We are becoming artisans once more. Pre and post capitalism are beginning to touch one another. Our challenge will be to ensure it touches and improves the quality of life for all not just a fortunate few.