The Age of Awareness

Coaching. Psychotherapy. Meditation. Spirituality. Self-improvement. Self-love. What do these seemingly different collective trends have in common?

There are over 10 different forms of coaching, each with countless associated techniques

and exercises. There are over 500 different forms of psychotherapy, most with similar degrees of efficacy. There are over 20 forms of meditation and paths to the spiritual. Available self-improvement and self-love techniques are too numerous to list here. The supply of these services in the market has skyrocketed, which is a likely indicator that high demand from us, consumers, is also present. But what is driving the high demand for these services? What are we collectively seeking as a society, as individuals? What do we long for or hunger for? I may be able to provide a tentative answer to this question only because the longing is also present in me. And, at this level of depth, you and I are not so different.

The answer to the question, I believe, is self-awareness. We long to know ourselves more deeply. But why? Well, there is reason to believe that we are beginning to recognize our deep need for it.

While human beings (or perhaps, human brains) are stupendously complex, our basic needs can be boiled down to a small number. Abraham Maslow’s hierarchy of needs gives a good idea of what these might be. Here’s a 4-sentence introduction to Maslow’s pyramid (shown below): Basic needs are the building blocks of human motivation. Whatever we end up doing with our lives, our motivation for it can be distilled down to these basic needs. Lower needs must be fulfilled before higher needs are (e.g., professional success – part of the need for esteem – will not be on one’s radar if his or her personal security – part of the need for safety – is at severe risk). As we fulfil lower needs, the higher needs become relevant and we begin to long for them. From lower to higher, Maslow’s basic needs:

Ironically, self-awareness is not on Maslow’s list, but it does seem to be a critical ingredient along the way – particularly in the transition from Esteem to Self-Actualization. And the need for self-actualization seems to have remained “dormant” or viewed as unnecessary at the societal level – until quite recently.

So I have 2 aims with this blog. The first is to suggest that we, adults in Western societies, are beginning to push against the ceiling of Abraham’s pyramid (self-actualization and, less saliently, self-transcendence). And our “pushing” is manifesting in a variety of wacky, unexpected, and seemingly incongruent ways. The second aim is to suggest that these ways are not so incongruent, after all.

There are many flavours of ice cream, but whether you opt for chocolate or strawberry, all flavours work partly in service of our need for hunger. And while there are many forms of enhancing self-awareness (e.g., coaching, meditation, etc.), they are all in service of our need to self-actualize. Even the RSA’s recent call to arms, The Power to Create, seems to be in service of this emerging need for actualization. There is a very strong connection between actualization and self-awareness, as Maslow observed: 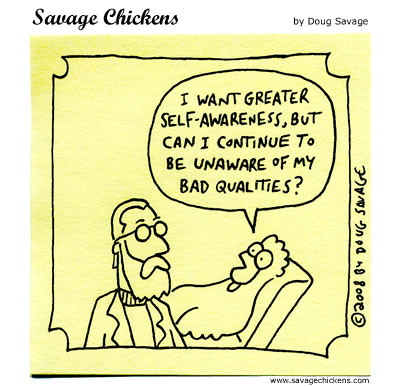 In other words, self-actualizing people seem to have explored their inner lives to a remarkable extent. This is not easy, and it has little to do with the external wilderness of politics, social norms, geography, current affairs, Ebola, etc. Self-awareness begins, well… here, right here, within. Indeed, coaches, mindfulness instructors, therapists, self-improvement gurus all direct a person’s attention inwards, to the self, to varying degrees and in a way that has rarely, if ever, been attempted by most of us. Slowly, however, more and more people seem to be noticing a personal longing for self-awareness. If pursuing personal coaching, therapy, or meditation seems like a selfish act to outside observers, it’s probably because it is a selfish act, but not in any conventional sense of the word. It is not about prioritizing one’s pleasures and interests over those of others, as is commonly understood by the term selfish, but rather it is about exploring the multiple sides of the self, both good and bad, light and dark, pleasant and unpleasant. Both forms require an inward turn, but of very different flavours. In sum, bringing a curious and investigative attitude to the self and its functioning seems a necessary step on the road to actualizing it.

While some claim that we are living in an age of loneliness, if perceived via a slightly different lens, loneliness may partly be fueling our inward turn toward the self. It’s true that globalization and the internet have led to the hyper-exposure of different people, cultures, and ideologies. The differences between us, humans, are now amplified like never before in our history. We are stranger to each other than we ever have been. Under these conditions of decreased physical isolation and increased psychological isolation, the longing for integration and connectedness seems like a natural response.

There is little solace to be found for such loneliness in a society that is increasingly diverse, unfamiliar, and virtual. But the sages, those spiritual and philosophical, hinted that greater self-awareness may paradoxically lead to a greater sense of connection. By discovering and connecting with deeper aspects of ourselves, we may find that the connection we seek has been there all along, including now. As the Buddha observed, “Nothing ever exists entirely alone; everything is in relation to everything else.” Self-awareness may be the ticket to realizing this.

There is reason to believe that we, collectively, are beginning to perceive our need to self-actualize.

So why might all of this be happening now? Why are we collectively seeking these “higher” level needs now, at this point in history? While that topic lies beyond the scope of this brief blog, the simple answer is, well… simple: People may increasingly be recognizing their higher-level needs because we, as a society, are becoming more proficient in fulfilling the lower level needs of the populace: Physiological needs are met via access to food, property, and sex. Safety needs are met via sufficient employment and law enforcement. Belonging needs via pluralism, diversity tolerance, and social networking. Esteem via access to careers, study, professional preparation, etc. In this context, we seem to be doing a pretty good job (though in other contexts we’re clearly not). I am not implying that every individual in society is capable of addressing most of these basic needs even most of the time, sadly, but many individuals are, to varying degrees, able to do so. I am certainly not alone in suggesting that we, collectively, are at least getting something right (not perfect). While this development sounds very promising to cheerleaders of growth like me, our human need to self-actualize is still far from being “the talk of the town.” It is not yet recognized, acknowledged, nor considered at any considerable degree in the public sphere. Nevertheless, it seems to be inching in that direction.

There is even more to this developmental story however. According to Maslow and a range of wise folk throughout history, the purpose of life is not just to actualize and perfect oneself, but to ultimately transcend oneself and connect deeply with all others. Interestingly, public consciousness is slowly beginning to flicker with signs of what seems like Maslow’s final and highest need – self-transcendence. The many books and texts being published on transcendence and spirituality in the modern age, such as Frederic Laloux’ Reinventing Organizations, neuroscientist Sam Harris’ Waking Up: A Guide to Spirituality without Religion, Einstein’s letter to a desolate father who had lost his son to polio (see image, or click here), and even the RSA’s upcoming spirituality report, all hint at the human capacity to somehow see past or move beyond the personality and self-concept. Indeed, Jonathan Rowson, director of the RSA's Social Brain Centre writes, "The spiritual injunction is principally an experiential one, namely to know oneself as fully as possible... [and to] recognise oneself as being part of a totality, or at least something bigger than oneself."

In closing, I’d like to highlight that a juicy, more controversial, but still highly valuable proposition in this blog is that self-actualization may not be an endpoint, but rather a prelude to something else. Framed differently, fulfilling our human potential in its entirety may culminate, naturally and inevitably, in something that may be captured by the term “spiritual” (and I do not mean religion). I am not implying that one needs to be self-actualized before he or she can walk a “spiritual path,” but perhaps it is necessary in order to reach the path’s end. Perhaps this one spiritual teacher nailed it, “You cannot transcend what you do not know. To go beyond yourself, you must know yourself.” The ancient Greeks would likely smile in agreement.

And collectively we seem to be doing just that, taking small steps toward knowing ourselves. Bravo, I’d say.

Andres Fossas is a Senior Researcher at the RSA Social Brain Centre. He tweets @afossas0