I was in Paris last weekend – a very pleasant thing to do. I’ve always had a soft spot for Paris; there is something about it that I never tire of. 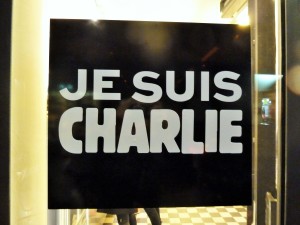 So it’s good to be there for the weekend. But this particular weekend was special. Last week a number of Parisians were killed for what they do and the way they do it. And Je suis Charlie now echoes along the boulevards and alleyways and streets and squares of Paris … France … the world.

7 January 2015 another tragedy dominates the news. It’s fair to say that my heart weeps as it did last month when 133 schoolchildren were killed in Peshawar. I am not going to say that I am surprised by events, though Peshawar did honestly shake me to the core. In my view, history is littered with stories of all peoples bustling and grappling for space, killing and trampling on others and their beliefs in the name of power and growth, Gods and greed, and there are inevitably arguments and counter-arguments and yet more counter-arguments. I am not taking sides here. And as my father once said, ‘whether you’re a terrorist or a freedom fighter depends who is telling the story’. But at this moment I despair at the endless conflict that cuts through the day and will inevitably cut through many tomorrows.

I admit that I struggle with the definitions and boundaries of satire, political correctness, humour. I can see that mocking a Prophet would be offensive to many, just as in my youth Bernard Manning’s racist, sexist, bigoted style of ‘humour’ was so offensive to me. Though that does not give me the desire or right to have taken his life. Similarly, I am offended by the apparent deletion by airbrushing of female leaders from the image of the Paris rally used in the Israeli publication The Announcer, yet I don’t want to shed blood because of it.

But of course the knife cuts so much deeper than all of this. These events are just drops in an ocean of history and must be viewed in the context of the West’s often aggressive foreign policies against the Muslim world. This week Charlie Hebdo publishes its first magazine since the killings and its controversial cover image again depicting the Prophet is antagonist to many. I am not sure what other possible response it could give if it wishes to live to its principles, but at the same time, as Will Self has stated, there is no absolute right to freedom of speech; it must be countered with responsibility.

On Saturday evening, 10 January, my daughter and I walked to the Place de la République. The statue of Marianne stood proud overlooking the square from her pedestal with Liberty, Equality and Fraternity surrounding her, in her right hand the symbol of Peace, an olive branch. At her feet a million tributes were strewn. The rain fell in sobs making the petals of roses heavy and wilting, the hand-written mementos blotted and bleeding, and the light from a myriad candles extinguished. People were huddled and lamenting. 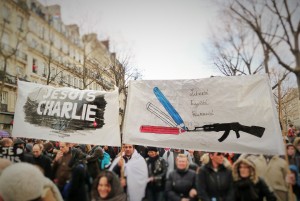 By 3pm on Sunday the multitude had gathered, nudging and squeezing their way toward the Place de la République. I was and am so touched by this vast outpouring of grief and support and the need to express a joined will and shared objectives cutting through boundaries; a very particular zeitgeist specific to this moment, an assembled heartfelt affront reacting to recent events. Je suis Charlie, je suis Juif, je suis Ahmed, pas à mon nom resounded and everyone knew what these proclamations meant. We were locked in the crowd as one connected and collective mass, like some kind of slowly erupting volcano, the crowd singing and chanting and clapping in unity and accord.

Much of my western capitalist world is driven by individualism and competition; every wo/man for her/himself, and yet on Sunday afternoon in the Place de la République something in the region of 1.6 million people came together to share grief and loss and sadness and anger and solidarity.

Periodically I felt fear. I considered how easy it would be, if the intent were there, for someone to throw a bomb into that ocean of people and take out so many. But the fear was brief. Above all else there was a sense of strength and support and safety in numbers.

Eerie moments of silence overwhelmed me intermittently. And then from the balcony of an apartment on the Rue de Magenta John Lennon’s Imagine rang out across the hushed multitude. I’ve never particularly liked that song but on this day, at this time, as the crowd sang along, my eyes welled up.

Humans largely speaking feel the need to belong – whether the assassin seeking martyrdom and respect and adoration for their act, or the masses who rally to share their communal abhorrence at the assassin’s act. But humans aren’t equipped to carry the pain of others’ tragedies for too long; we have to save our strength for our own personal tragedies. I write this as the school in Peshawar reopens and the surviving children return to their routine, albeit scarred. 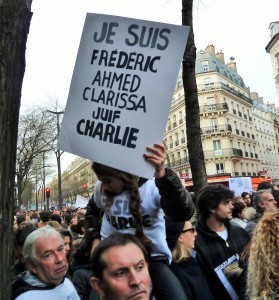 However, at least on that day, Sunday 11 January, at that time, the horrific acts that initiated the day show that terror does not break the spirit of the masses. It merely glues the masses together, at least for that moment. Other differences become irrelevant and dissipate into the air as the voice of the masses become unified. There are many opinions, counter-views, cynicisms about this rally in Paris on 11 January, but I personally am glad to have taken part. And as Jonathan Rowson so aptly put it in his blog about Peshawar, I too write this because I know in my bones that something important happened that day. Nous sommes Ahmed, nous sommes Juif, nous sommes Charlie.