8 key take-aways from our new report on self-employment

This week the RSA publishes a new report examining the living standards of the self-employed. How much does a typical self-employed person earn? How many are contributing to a private pension? What kinds of welfare protection are they entitled to? Below we spell out the answers to these and other questions.

Since the downturn began in 2008 more than half a million people have struck out on their own, with the result that 4.5 million individuals – or 1 in 7 of the workforce – are now self-employed. Such is the magnitude of the recent increase that self-employment has been found to account for more than half of all jobs growth between 2008 and 2014. Yet this is a trend that predates the crash: self-employment grew in nearly every year since the turn of the century. The implication is that self-employment has as much to do with long-term structural trends in our economy – new technologies, changing mindsets and shifting demographics – as with a short-term cyclical blip. 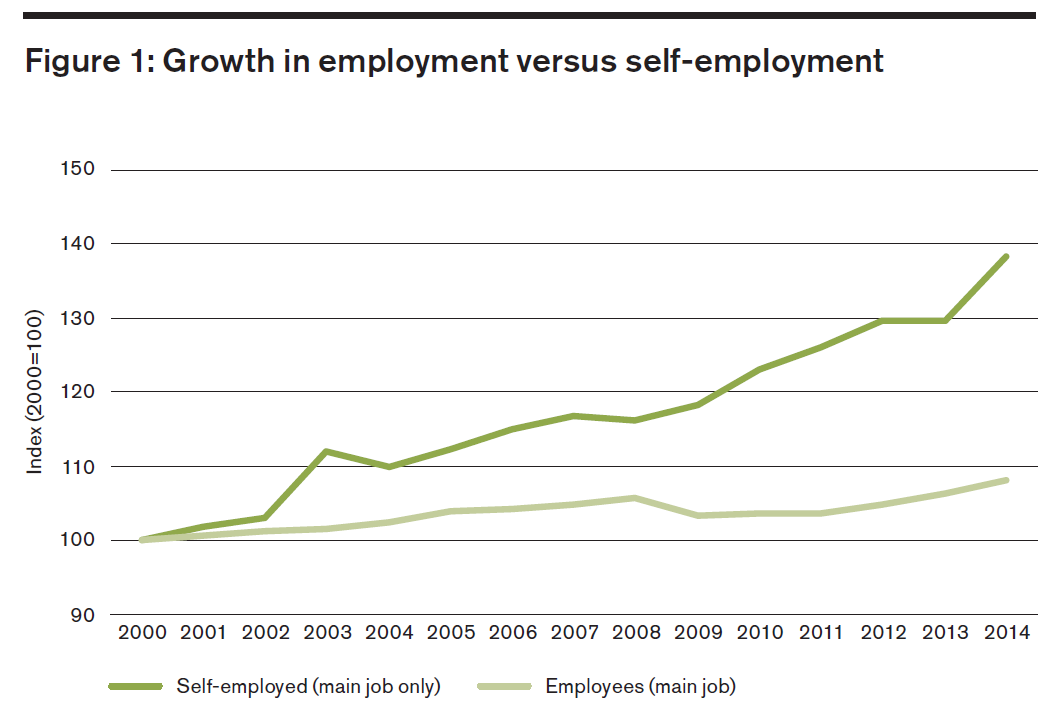 Political parties of all stripes have come out in support of this boom and put forward several proposals to assist the self-employed. Among the measures introduced by the Coalition government are the StartUp Loans scheme, the abolition or amendment of 3,000 regulations, and the introduction of multiple tax breaks. While each of these moves should be welcomed, they are overwhelmingly centred on supporting businesses as entities in themselves, rather than the individuals that sit behind these businesses. In a clear sign that the self-employed currently feel overlooked by the state, just 14 per cent of those surveyed in our RSA/Populus poll said that the government adequately supports people like them, and only 11 per cent that the welfare system is fair to people who work for themselves. 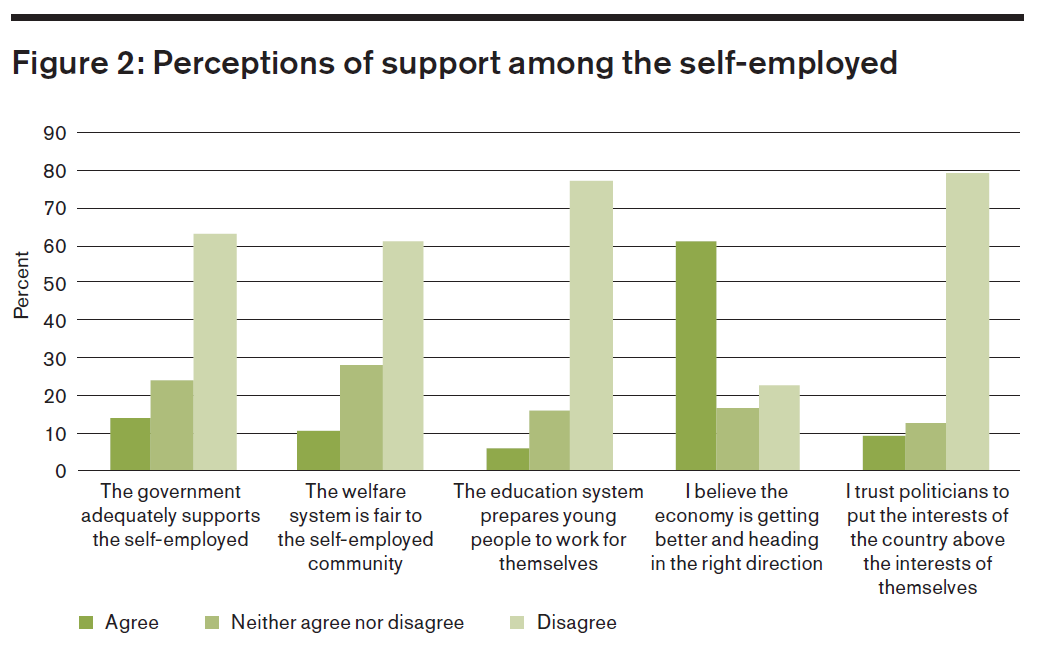 By their very nature, self-employed workers have no employer to fall back on during times of need nor to help them progress within work. Statutory Maternity Pay, Statutory Sick Pay, paid holidays, training support and employer pension contributions are just a few of the occupational benefits that people forgo when they strike out on their own. Against this backdrop, it is perhaps understandable that self-employment has been put on a par with zero-hour contract work and viewed as inherently precarious. Indeed, one of the key features of self-employed life is that risk is individualised rather than pooled with others under the umbrella of a single organisation.

#4 – Plus, we know the self-employed earn significantly less than employees – a shortfall of £167 a week

Our analysis of the Family Resources Survey indicates that the real median weekly wages of the full-time self-employed shrank by 12 per cent between 2008 and 2012, compared with an 8 per cent fall among employees. The result is that the full-time self-employed now earn close to a quarter less than their counterparts in a typical job, which equates to a weekly earnings shortfall of £167. To concentrate on the median, however, would be to ignore the large number of self-employed workers sitting at the low end of the income spectrum. Indeed, the poorest 20 per cent of self-employed workers earn a quarter of what the poorest 20 per cent of employees do. 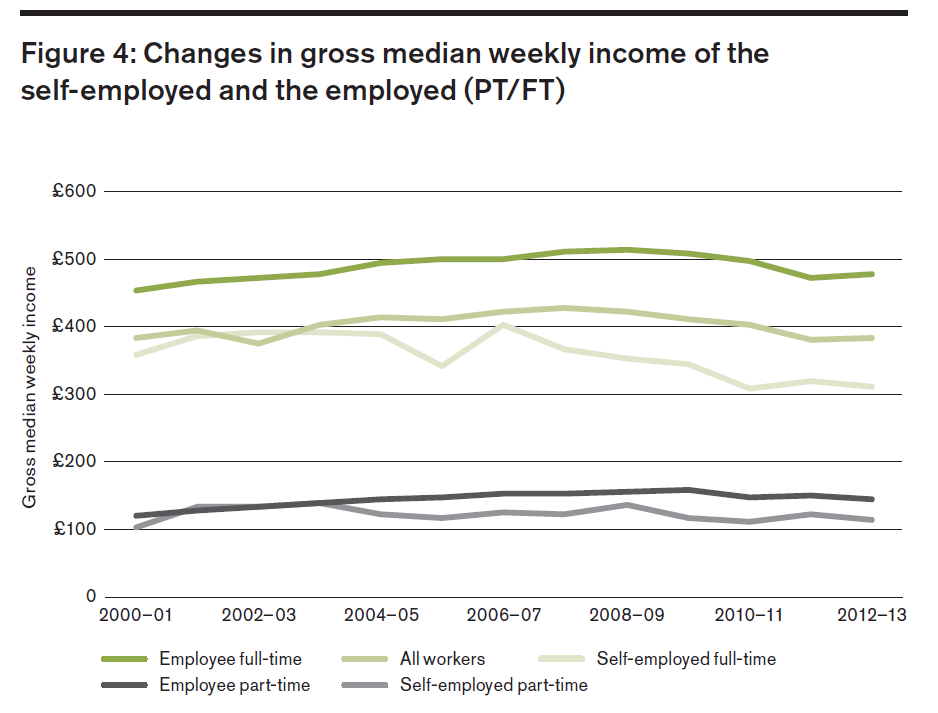 Media articles such as ‘Self-employed facing pensions time bomb’ and ‘Self-employed? You’re walking into a pensions nightmare’ paint a bleak picture of what awaits them in retirement – and these views are to some extent corroborated by government data. Just 26 per cent of the self-employed are currently contributing to a private pension, down from 42 per cent in 2002. Moreover, 55-64 year olds in self-employment (the group closest to retirement) have a median average of £50,000 in private pension wealth, which is around half the £98,700 enjoyed by their counterparts in a typical job. Long-term investment in personal development is also an issue, with self-employed workers being almost half as likely as employees to have had access to training in the past 12 months. 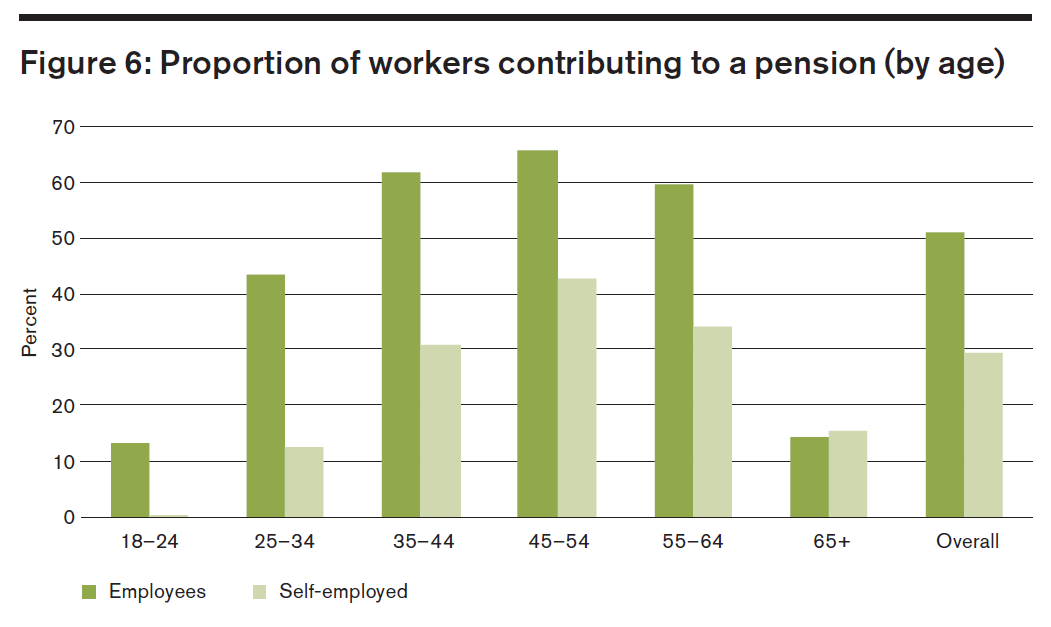 We outline 18 recommendation in our report, among them:

Open up Statutory Maternity Pay and Statutory Paternity Pay – Though costly, this would recognise that SMP and SPP are forms of protection not just for workers but also for new-born (or adopted) children, all of whom should benefit from the same level of care irrespective of their parents’ occupation.

Introduce a ‘Right to Request’ for more flexible payment terms in the housing market – The self-employed (and potentially employees) should have a statutory right to ask for more flexible terms on their rent and mortgage payments, for example by switching to an interest-only mortgage.

Work with the BBC to establish a MyBusiness portal for training information – The BBC should consider creating a MyBusiness portal that collates information about training – both the general business management kind and that related to specific industries. The BBC is the ideal organisation to run such a portal due to its unparalleled reputation, reach and resources.

The fundamental stumbling block to extending more protections to the self-employed is that they pay lower rates of National Insurance contributions (NICs) than their counterparts in wage work. Our recommendation is therefore to make a clear-cut alteration to the tax system, such that the self-employed community as a whole pay higher NICs, but where the greatest burden is placed on the highest earners. By abolishing Class 2 NICs (as promised by the Chancellor), increasing the rate of Class 4 NICs, and raising the threshold at which this tax kicks in, we estimate that the government could raise an extra £280 million a year (not huge, but a start), while making a progressive distributional impact overall. Around 38 per cent of self-employed workers (with incomes from self-employment between £5,965 and approximately £20,000 per year) would gain from the reforms, with those earning more than £20,000 (around 34 per cent of self-employed people) losing and the remaining 27 per cent earning too little to be affected by the reform.

#8 – While all of this sounds gloomy, we shouldn't forget that the vast majority of the self-employed are happier working for themselves

Here is a fact borne out time and again within research studies: the vast majority of the self-employed enjoy working for themselves. According to the government’s Understanding Society Survey, around 84 per cent of the self-employed are satisfied with their job, compared with 76 per cent of all employees (a quarter of the self-employed are ‘completely’ satisfied). Of course, not all groups in the self-employed community score so highly; the under 25s, for example, are noticeably less satisfied with their life than those in other age groups. Yet, by and large, high levels of both job and life satisfaction are visible across broad swathes of the population – even among those earning below the minimum wage. Our previous report, Salvation in a Start-up, examined some of the reasons for this ‘happiness paradox’.