With the UK’s population ageing rapidly, social isolation is one of our biggest challenges and not something we can afford to ignore. Loneliness can be difficult to shake off once it has set in, but there are easy ways to help those at risk feel more included in their community. One such way, is music.

Some of you may recall that The Spitz was originally a music venue in Spitalfields Market. In 2007, it had to close its doors due to the ‘regeneration’ of the market, despite a petition signed by more than 10,000 people. "Bowed but not defeated..." was how Time Out described its sad demise.

I was able to keep the Spitz name alive by putting on events in other London venues like Kings Place and Rich Mix, and at the end of 2013 The Spitz gained charitable status. The Spitz Charitable Trust  now delivers an evolving music programme that includes participatory, social, exploratory and performance strands; bringing professional musicians into places like adult day centres and nursing homes.

I just couldn’t believe it. I’ve enjoyed the music and everything.  You see I live alone. It brought everything back to my heart, I’ll tell you (participant at Haven Day Centre, Tottenham, now in danger of being shut down).

Our events and workshops demonstrate the powerful ways that live music can bring people out of their shell and we regularly see elderly people talking, dancing and laughing together. We have seen small miracles such as someone who can hardly move her upper body using both arms to shake maracas in time. 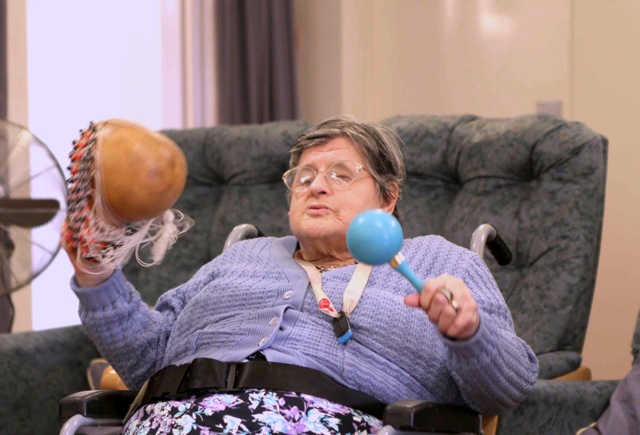 Songs are often repeated three or four times in a natural jazz style - this makes it easier to retain and allows songs to be especially accessible for those with memory challenges, but without being condescending.

It all started back in 2011 when I was invited by Entelechy Arts to bring six musicians to a nursing home in South London.  On doing some research about the home, I discovered that there was a multi-cultural mix of people; reggae was at the top of their wish list, followed by Jazz so, I handpicked six musicians with warm hearts as well great musicianship and improvisational skills.

The Spitz musicians have class and an understated glamour which the residents of the centre immediately recognise as top quality.  The multi-cultural make-up of the group mirror the cultural diversity of the centre. (Rebecca Swift - Entelechy Arts)

This led to further work with Entelechy Arts. Now The Spitz has charitable status and with the help of two grants from the RSA Catalyst fund we have been able to forge deep links with three Day Centres in Haringey. This not only allowed continuity but also gave us the opportunity to record our work with photos and footage and use a short film as part of our (successful) bid to The Arts Council.

A lot of work goes into thinking about the songs and how we can develop them so they are more meaningful across cultures. (Jonathan Gee - Spitz Pianist)

In October 2014, we celebrated Older People’s Day with an event and exhibition in Wood Green shopping mall. As part of the preparation we had planning meetings with some of the participants – these in themselves created quite a buzz with a lot of laughter, tears, exchange of ideas, wisdom and sharing of life stories at the same time as choosing the nine best photographs.

I truly believe that music has a vital role to play in making our transition into older age meaningful, and that it improves the well-being of older people and those who care for them.

Music breaks down the barriers between old and young and allows possibilities for new and creative exchange. It allows the process of growing older to become a chance to re-imagine ourselves.

One day I’m going to be elderly and this makes me see that the future could be beautiful  (a young member of the public watching a Spitz event).