Blog: 9 Key take-aways from our new report on micro businesses

This week the RSA publishes a new report looking at the economic impact of the micro business boom. Will this worsen or alleviate the UK’s lacklustre productivity performance? Will it help or hinder much needed innovation? And what will it mean for job creation and the quality of work? Here we spell out the answers to these and other questions.

Defined as firms with 0-9 employees, the number of micro businesses now stands at 5 million, up from 3.5 million in 2000. In contrast, the populations of all other sized firms have either increased only marginally or fallen in number.

The result is that micro businesses today account for 33 per cent of private sector employment and 19 per cent of total output.

The RSA has dubbed this trend ‘the second age of small’, in reference to the fact that cottage industries were once the norm in pre-industrial Britain.

2. Many see this as a bad economic omen and a sign of a fragmented labour market

Not everyone is enthusiastic about this phenomenon. A key point made by the critics is that large micro business populations are characteristic features of poor countries, not rich ones. The developmental economist Simon Kuznets long ago argued that small firms would diminish in number and be replaced by large ones as countries became more prosperous. Modern day economists harbour the same doubts. Speaking at our Self-employment Summit earlier this year, the economist Will Hutton argued that the growth in self-employment is “part of a picture of capitalism that is seriously dysfunctional”. 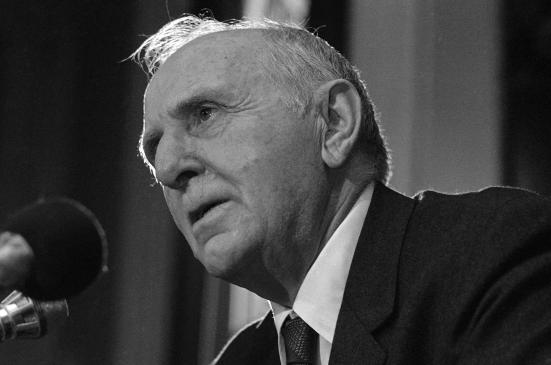 3. But our research finds that micro businesses may help to spur productivity

Straightforward analysis of government data shows that micro businesses are less productive than their larger competitors, with a turnover per employee that is on average half that of very large firms (500+ employees). However, this analysis does not take into account the high degree of churn within the small firm community, with half of people starting up in business never making it to their third anniversary. Were we to concentrate on long-standing firms, the overall financial health of the micro business population would look significantly better. Another caveat is that productivity among firms varies enormously by industry. When we exclude sole traders, we find that micro businesses have higher productivity levels in 9 of the 19 fastest growing sectors, particularly those based on relationships such as education, health and social work. 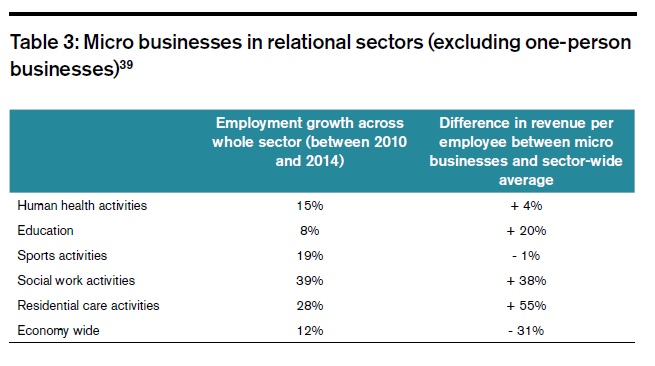 The latest results of the UK Innovation Survey suggests that small firms struggle to innovate, with just 13 percent investing in internal R&D compared with 23 percent of large firms. But there is evidence that small firms are more efficient at innovation, meaning they create more innovations for every unit of R&D expenditure as well as extract more financial value from these developments. Also, the very nature of innovation is changing. Investment in ‘intangible’ or ‘soft’ innovation – the generation of new concepts, designs and experiences – is estimated to have grown at twice the rate as spending on tangible innovation since 2000. This is important because micro businesses are arguably better placed to engage in the new kind with its lower resource requirements. 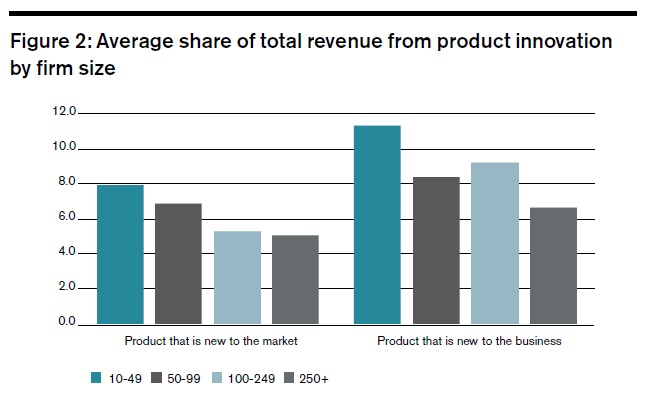 Employment opportunities within micro businesses appear bleak at first sight. Workers tend to be paid less, engage in training less frequently and have fewer benefits such as extended maternity leave. However, the latest results from the Workplace Employment Relations Study show that micro business employees are the most satisfied group of workers in the labour market, scoring highest on several indicators such as job control, influence in decision-making, loyalty to the business and even satisfaction with pay. Moreover, micro businesses are more likely to employ individuals on the economic margins, including migrants, the disabled and the recently unemployed. 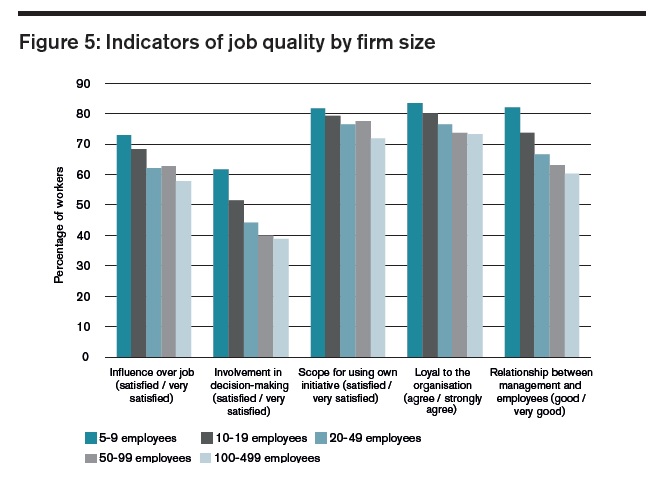 6. In any case, the value of micro businesses is not well captured by conventional measures

Whether looking at productivity, innovation or employment, micro businesses are clearly not the basket cases some argue them to be. But even still, we should question the extent to which conventional economic indicators capture their true value. Micro businesses bring colour and diversity to our economy, but this can hardly be articulated in facts and figures. Moreover, the people running micro businesses have different objectives, not all of which prioritise efficiency and innovation. Think of the hundreds of thousands of micro social enterprises that put purpose before excessive profit, or the many over 65s in self-employment who may have started a business for personal enjoyment rather than financial gain. Previous RSA research led to a segmentation of the self-employed that helps to articulate the different goals of this diverse community. 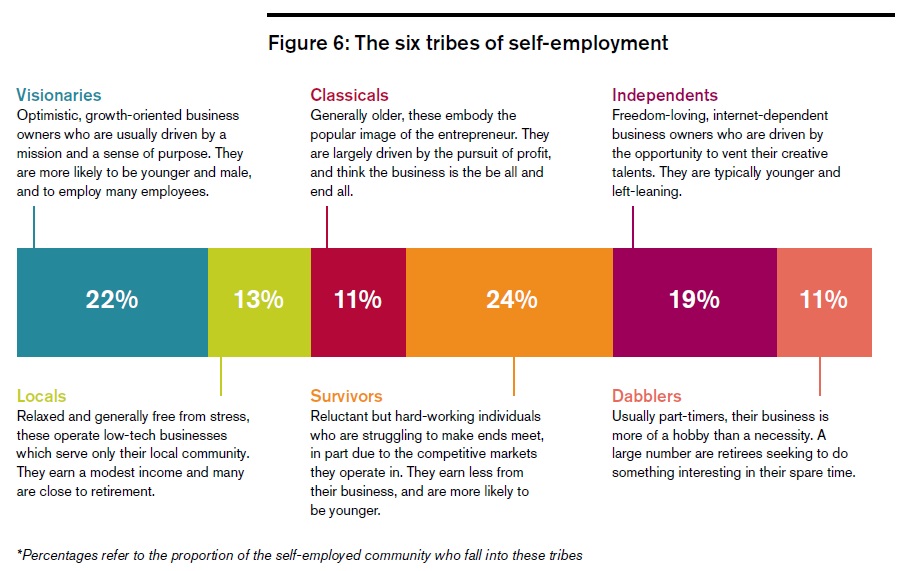 The clear message is that the rise of micro businesses is nothing to be feared. Rather, this trend should be taken as the sign of a prosperous nation transitioning into a different kind of economy. The question is why micro businesses are thriving today, and in particular within the UK. The most obvious reason is the emergence of new technologies, with the advent of the internet and the increasing sophistication of computing dramatically reducing the cost of doing business. Yet technology is just one among many drivers making micro businesses more viable. Rising skill levels, for example, mean that people have never been better equipped to work for themselves. Another driver is government policy, with successive governments since the 1980s pursuing a pro-business agenda of tax cuts and deregulation.

8. Rather than be preoccupied with micro businesses we should pay more attention to the activities of oligopolies

None of this is to say that large businesses are becoming irrelevant – far from it. Firms with more than 250 employees still account for half of all economic output in the UK. For the most part, very small and very big companies – mammoths and minnows – are able to live alongside one another for mutual advantage. However, in some sectors the balance of power has become skewed with the emergence of oligopolies (markets where a handful of firms dominate). According to one study, the top 5 companies own 89 percent of the market share in airlines, 70 percent in supermarkets, 80 percent in cinema screens and 91 percent in video games. While every industry is different, there is evidence to suggest that oligopolies can have a malign impact on consumers, small suppliers, innovation and the political process.

9. We can shape our economy – the status quo is not predetermined nor inevitable

To be clear, the problem does not lie with large firms per se, but rather the proportionate control that some have over their markets. The challenge for the government and others is to find the ideal level of concentration– that allows for both big and small businesses to flourish for the benefit of consumers, workers and entrepreneurs alike. While policymakers have in the past called for a rebalancing of the economy in terms of sectors, this report finishes by calling for a rebalancing in terms of market concentration. Indeed, it is important to recognise that the economy we live in is not predetermined nor inevitable, but rather a system that can be shaped if there is enough will to do so.