Blog: Why America is an entrepreneurial country after all

Is America as entrepreneurial as we think it is?

We’re led to believe that the US is a place of go-getters and risk-takers; a capitalist’s paradise where anyone can make a buck as long as they have an idea and determination. Freed up by a smaller state and incentivised by minimal taxation, businesses can grow, create jobs, innovate and take on international competitors.

But several economic commentators have recently called this out as a myth. Writing in The Atlantic, Jordan Weissman says that the US is ‘pretty unexceptional’ at entrepreneurship and that the country’s start-ups are not ‘unusually innovative’. Only a few days ago, Bloomberg’s financial reporter was on air talking about why the US is such a ‘self-employment laggard’.

In each case, the authors point to data from the OECD. The organisation’s most recent analysis shows that only 6.6 percent of Americans work for themselves – a rate of self-employment that sits behind France, Sweden and even Russia. In fact, the only developed country to have a lower proportion of workers in self-employment is Luxembourg. Plus, as the graph below shows, the US self-employment rate has been on a downward trajectory since before the crash. 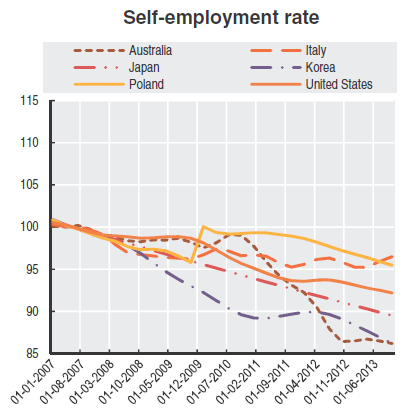 For a while I was satisfied that the OECD was right. Perhaps the US never had the entrepreneurial zeal we all thought. Or maybe it did, but the need and desire among people to run their own business diminished as the country became more prosperous. This is, after all, what the late economist Simon Kuznets thought would happen as economies became richer.

But then I came across the latest results of the Global Entrepreneurship Monitor, a worldwide annual survey of entrepreneurial behaviours and aspirations. Their latest round of surveying shows that 14 percent of the US population are engaged in ‘early-stage entrepreneurial activity’ (i.e. they are starting or have recently started a business). This is greater than any other developed economy and is the highest rate the US has seen in at least a decade (see graph below). 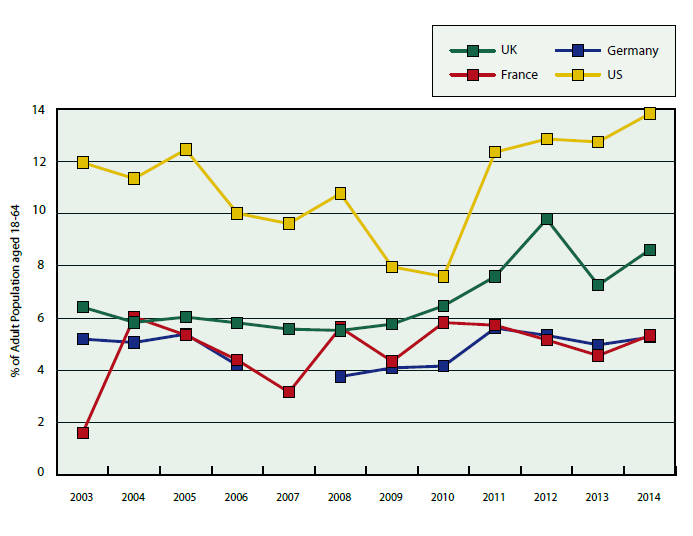 So what’s going on? How can the GEM and OECD data point in such wildly different directions? One reason is that GEM counts the ‘self-employed’ as anyone who works for themselves, while the OECD measurement only includes business owners with employees. This to me is a major flaw in the OECD’s methodology, not least because it overlooks the economic activity of a huge swathe of individuals. Businesses without employees are still businesses.

Assuming that GEM is a more reliable source of information, what else does it tell us about US entrepreneurial activity? First that the country excels not only in start-up rates but also established business rates. Nearly 7 percent of US citizens have been running a business for more than 3 ½ years, a higher rate than in the UK, France and Germany.

Second, that US business owners are more likely than those of other countries to aspire to grow their business and take on staff. Over a quarter of US business owners who already have 10 employees plan to expand their worker base by at least 50 percent in the next 5 years.

And third, the GEM survey data tells us there is considerable potential for even more US citizens to work for themselves. Nearly half of the US population who are not currently self-employed say there are good start-up opportunities where they live, and nearly half that they have the knowledge and experience to start a business. They are also less likely than people in other comparable countries to say that fear of failure would prevent them from ‘going it alone’. 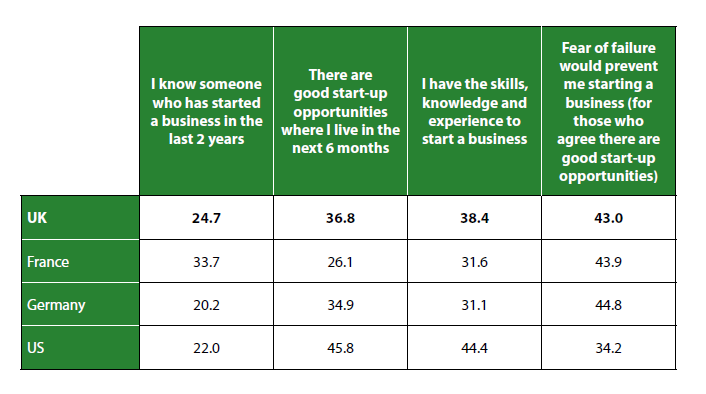 All of this throws cold water on the notion that America is not a small business country – it almost certainly is.

But why should we care in the UK? The answer is because it confirms that a country can be both prosperous and entrepreneurial, and that the UK’s high rate of self-employment does not mean our country is going backwards rather than forwards.

As it happens, this is the subject of our recent report on micro businesses. Check out a summary of our 9 key findings here.