Blog: Art, community and controversy: an extended tale of The Peterborough Child 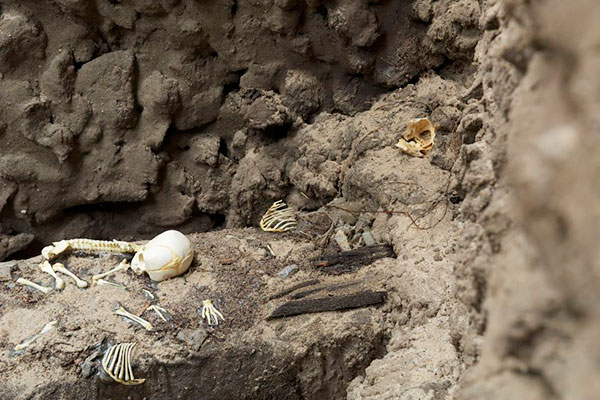 This commissioned artwork was always likely to be something that didn’t shy away from its context, given that the artist appointed had previously worked on culturally complex commissions around the world, including Palestine, Warsaw, Sweden and London and, furthermore, whose practice is concerned with building relationships, creating public debate and considering social cohesion.

This was the final commission and project of a three year long programme of work called Arts and Social Change, which itself was one of seven programmes of work taking place in the city under the banner Citizen Power Peterborough; a partnership between Peterborough City Council, Arts Council England and the RSA. Citizen Power was designed so that participants could gain a stronger attachment to Peterborough and develop a greater capacity and propensity to get involved locally through innovative approaches to place-making across a range of programmes involving education, sustainability, leadership – and the arts. 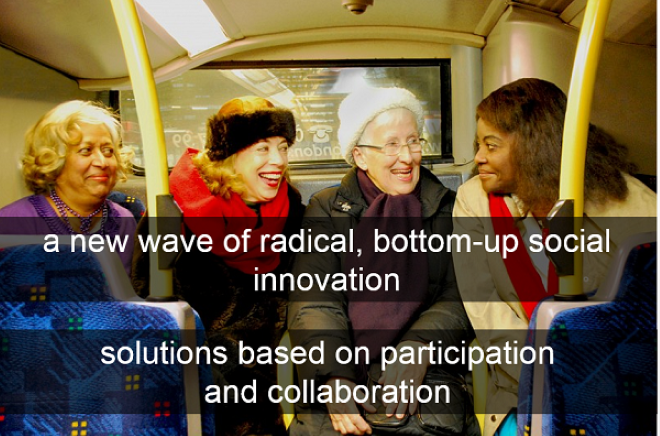 Credit: Ezio Manzini from Design when Everyone Designs

In this time of advancing austerity, it was the best (or worst) thing a city could do, depending on your viewpoint. And so it was that in mid-2012, in response to the rich archaeological heritage of Peterborough, conversations with local people and the artist Joanna Rajkowska’s own personal experience of motherhood, The Peterborough Child came into being.

An artificial archaeological site was fabricated containing the synthetic remains of an unknown bronze age child placed in the ground as if a real dig had unearthed this surprising find – local people were to be invited to engage with the sculpture and consider the identity of the child, reflect on the diverse community that inhabited this part of Peterborough and learn that Peterborough has historically been a melting pot of cultures, difference, but also commonalities.  The universal themes of parenthood, of compassion and of hope were all to be explored through the project and given a platform.

In Joanna’s words, the plaque sitting alongside the sculpture reads:

‘The Peterborough Child was a girl born 3500 years ago and found here during a 2012 excavation. Tests indicate that her mother came from the East, but her father was a local man.  It would appear she migrated for reasons unknown to us. Analysis of bone tissue show that she suffered from a very rare DNA mutation.  Her 13th gene was slightly damaged, which produced a genetic form of eye cancer, retinoblastoma.

It was thought that a child like this was valued by the community and was considered to have shamanic powers. The site of her burial was carefully chosen to ensure it brought blessings to the land. Evidence of her special status can be seen in the objects her grave contains, among them a beaker, a fawn skull and deer teeth. Some were presumably gifts for her to take into the afterlife, but others seem to be invocations. Apparently, the donations continued throughout the centuries as the most objects date from our times. The distinctive container next to her was fashioned from deer nostrils and holds her two well-preserved eye tumours.’

Visceral and emotive, this description makes in part uncomfortable reading, but just because something is uncomfortable doesn't mean we shouldn't talk about it – in fact, it probably means we should find a way to. The Peterborough Child has a direct line to our humanity and fragility. It is a story that in part reflects the lived experience Joanna had in Peterborough whilst her daughter was unwell.  Life imitates art, or is it that art imitates life? 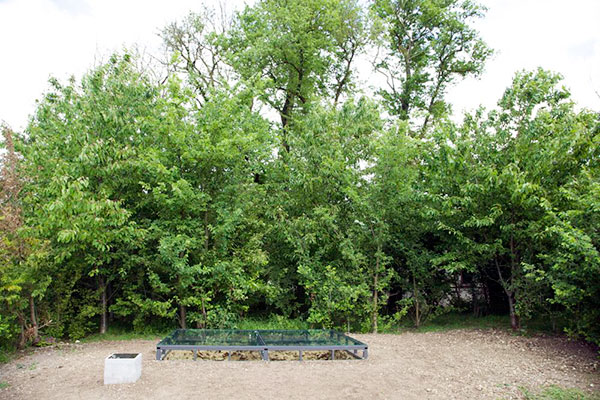 So why tell this story now?  Well, The Peterborough Child has found a new home. It has been installed in the grounds of Wysing Arts Centre in Bourn, Cambridgeshire, and, following the respectful public launch, the time is now feels right to talk about its journey and surface some of the questions this experience has demanded – at least, this is my perspective and others will have their own.

It’s hard not to get attached to a place when you work there (albeit based in London) – you become driven by the interests of its residents and form close relationships with those people who work hard and with passion. This was the surrounding narrative that The Peterborough Child was created in.  One of partnership, of shared vision, of shared struggle, one of managed change.  The very nature of the community development means there are competing ideas, contested views and challenging people.

This purpose here is to describe what I learned from the process, which was brought to a premature end. It happened when Joanna and I presented to a joint community and council meeting at which it became clear that some community representatives found the work uncomfortable and disrespectful to their culture. Despite the earlier work to engage local people, it was the first time they had heard of this project intended for their corner of the city and it was also a fait accompli; the sculpture itself was travelling from Poland to Peterborough on that very day. Suddenly, it was all happening too fast and the important message of how the community would be invited to engage in the work got lost in amongst valid concerns about sudden change, the ability of art to disrupt and mistrust towards the council for allowing this, seemingly without consultation.

For me, in that moment, this turn of events was all rather baffling; we had the previous day done the same presentation to local councillors who were anticipated to be the hard crowd, and indeed a crowd we had to win over.  Instead, they were highly supportive, even coming up with their own suggestions as to how the community could take the project forward.  As such, we weren’t completely prepared for this meeting to be so contentious – nevertheless, it was at this point that The Peterborough Child entered into a sort-of-purgatory for nearly three years, rejected by the very place and people it was created for.

Is any of this important now? Probably not, as much time has gone by and there is a new future for The Peterborough Child due to the tenacity of those involved in seeing it realised but I’ve played back parts of that meeting, reflecting on the run up to that moment and whether things could gone differently.

Reflections on why this happened.

The first consideration is the timescale in which the project had to be delivered.  As the final piece of the Citizen Power programme jigsaw, it had to be realised by a definite deadline given this was when the funding came to an end.  We started late due to unforeseen circumstances and had little contingency time available, but set to work quickly. Even though you cannot force these things, we all had to get to know each other, and introduce the artist to a new place, its residents and key project stakeholders with a sense of urgency.

What could we have done differently?  One thought is to have asked the council to have project managed it and been a co-curator from the start.  They were, via the communities team, heavily involved but perhaps this support should have been more structured.

The second thought is the way in which Joanna was inducted into Peterborough – for reasons I don’t understand, the culture trust partner never met the artist once when she was in the city, despite being part of the recruitment panel. I’m not sure that a single email requesting an introduction to the arts in Peterborough by the people with strategic responsibility for it got a reply (there is, by the way, a diverse and long standing arts community).  Effectively, there was no support or engagement from this key player.

What can we learn? Not to take no for an answer, go to the top? (Though we did attempt do this) Expose the behaviour? Ask why? In my experience this is an endemic challenge of partnership and personalities, with this in mind I would tackle it head on now and pick up the phone.

The third consideration is a lack of communication between those who should have made sure that the ‘right’ people knew about this project, its ambitious objectives and Joanna’s proposed response.  It was a problem because people are so busy and in a busy, stressful environment things slip through the gap. Dave Yates wrote insightfully that community development work inherently creates a community.  Those that engage become a part of something.  In our project, stakeholders and their wider networks needed to be part of the engagement process in order to become part of the movement.

What can we learn: Be alert to when there are key moments that need communicating.  And not just communicated but actively listened to.  This should be part of a communication strategy that includes an overt consideration of senior internal project partners. Do not leave this to chance or assumption. 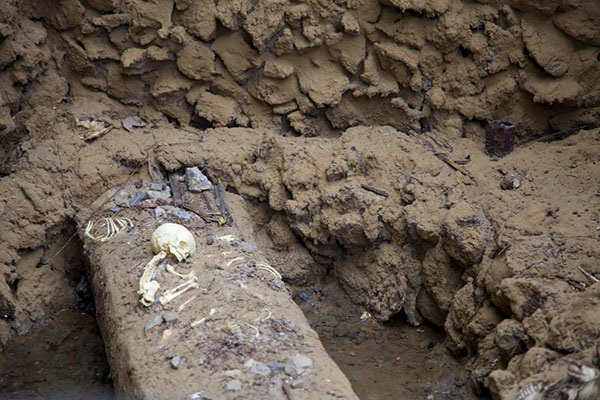 The last reflection was the reaction to lock down when it got difficult.  The artist and I would have liked the opportunity to talk to community members again.  This was not permitted and for reasons of respect for these hard won relationships there was no option but to comply. Undoubtedly, however, the artwork provoked an urgent need for a conversation around cultural difference, around whose voices are heard, and whether some voices are more important than others; a dialogue that via this project remained closed.

Ultimately, the threat of ‘wasting’ public money on art during austerity is a powerful fear.  Ken Robinson told us recently that organisations are inherently conservative – a fascinating observation when you consider what makes change happen.

It takes vision, commitment and tenacity working with communities, artists and the public realm. There is always an ambition that public art has a relationship between the public for whom it is intended as a gift, and in this case as a tool for positive social engineering, whose intended aim was personal reflection and collective connection and, further down the line, the effect of enhancing identity and boosting the profile of this ‘forgotten’ part of town.  What would happen if art was at the centre of civic life: Devoted and Disgruntled are asking this very question.

Public art also engages people with art who may not engage otherwise, simply because it is public, and this is a good thing. However, art is subjective and as such can always potentially be divisive, though there are examples of councils who have earned high praise for their courage and investment in public art and since reaped economic and social rewards.

In this space there is a tension between an artist being, well, an artist, and having drive, passion and conviction and the commissioners’ expectations from a naturally conservative domain exposed to pressures we only gain a small insight into – what process would best ensure the two are matched well? And if some of the best art is challenging where is the room for that? 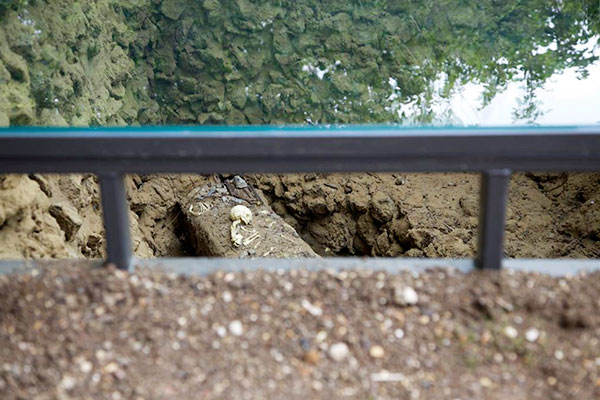 So to finish this tale, the journey of The Peterborough Child is complete and, at the same time, just begun. I highly recommend a visit to Wysing Arts Centre to spend some time with The Peterborough Child and create your own imagined identity. For it, despite what the journey suggests, is a beautiful piece resting quietly in the woodland with an open grassed area to the front and rough flinty path leading the way.  Aerated via an elevated glass covering, the child is open to the elements and immersed in the Cambridgeshire countryside. As a Peterborough child, though not residing in the place she was imagined for, this still feels entirely appropriate. She has taken on a new identity now, instead of being a part of the urban fabric she is an element of nature, a friend to the birds, a reflection of the past with a contemporary story. A loved little girl.