We often hear that the world is getting smaller, as people travel with greater speed and frequency. New data released this month confirms this trend within the UK, with the country feeling smaller as we travel further afield in commuting to work. As a result, the economic footprint of cities is larger – and 15 cities have effectively been wiped off of the map entirely. 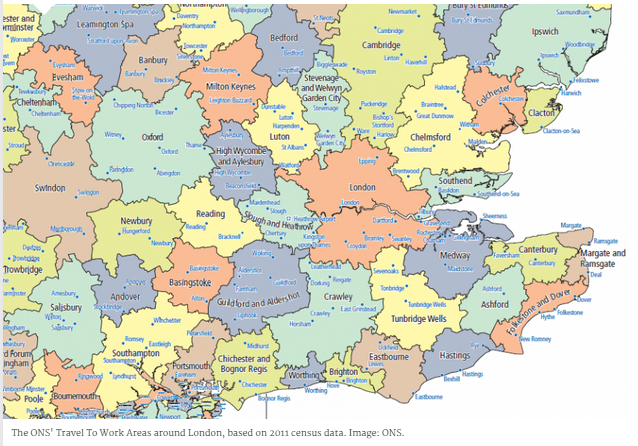 The economic logic of cities argues that bringing people together in workplaces and business districts enhances productivity and drives growth. The promise of greater productivity (derived from such “agglomeration effects”) underpins the government’s commitment to giving city-regions like Greater Manchester more power to run their own affairs.

While ONS published Census-based commuting data a few years ago, they have only just finished crunching the numbers which allow them to redraw the map of travel-to-work areas (TTWAs). Here the UK is defined purely by commuter patterns; blissfully ignorant to administrative boundaries. 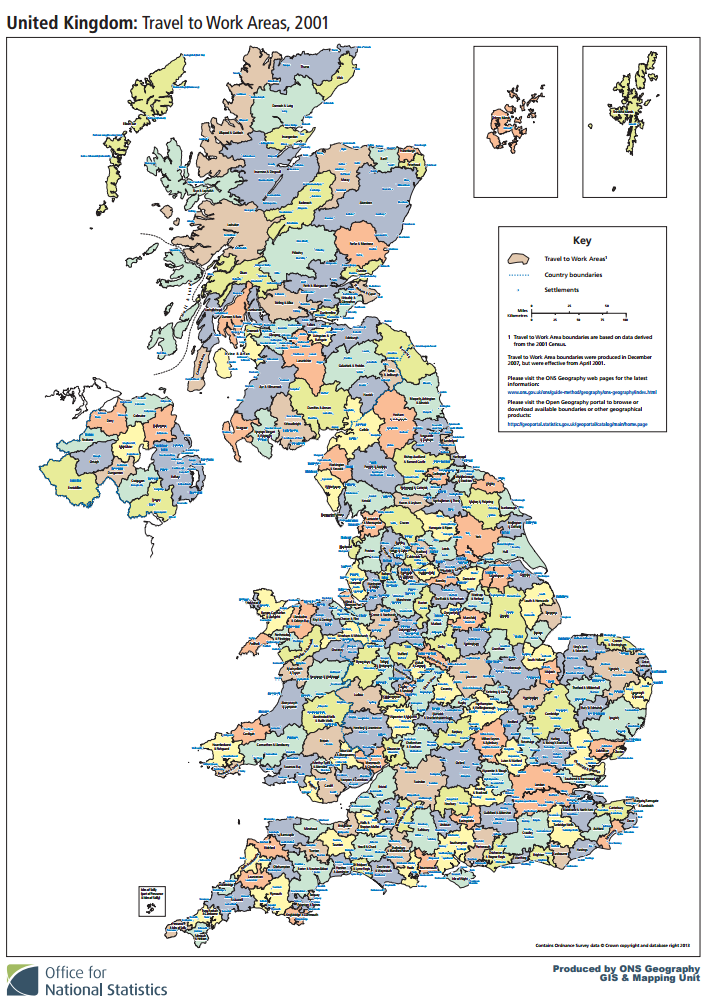 The 2001 TTWA map. You can see a larger version on the ONS website here.

To achieve this, the ONS uses an algorithm which defines local labour markets as places where 75 per cent of residents who live in the area also work in the area; and 75 per cent of workers in an area also living in that area. It sounds confusing, but basically TTWAs are the best way to understand the scale of commuting patterns and provide the best empirical evidence for what a “real economic geography” of the UK actually looks like.

Other efforts to capture the UK’s real economic geography have stumbled: when the government invited local areas in England to form Local Enterprise Partnerships, they ended up treading on each other’s toes, sometimes quite awkwardly.

Research to understand the consumer footprint of retail centres or define housing market areas based on domestic migration have also been inconsistent. While future attempts to map the UK are likely to harvest big data (here’s an attempt to analyse 12b phone calls), TTWAs reflect our everyday experience of economic life.

Looking at the latest data, several interesting findings emerge – the most important being that, over time, places in the UK are merging into fewer and fewer travel -to-work areas. 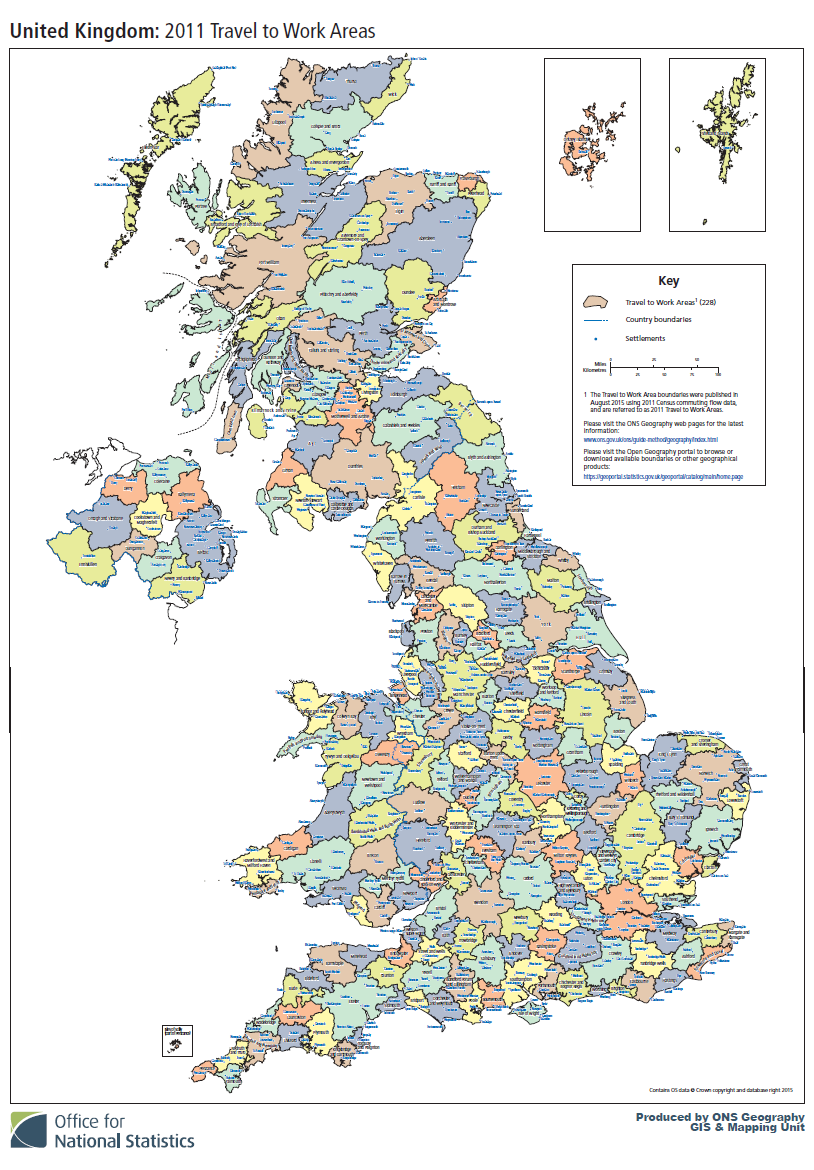 This is a reminder that neighbouring places are more inter-dependent, economically, than many political leaders would care to admit. Therefore, the map is particularly relevant to the ongoing devolution and decentralisation agenda.

Comparing the latest map with the previous map from 2001 shows several casualties, and emerging regional capitals, as the UK’s economic geography continues to shrink:

The case for working across council boundaries on skills provision, housing policy and economic development is starker than ever

So what does all this mean for those who work to have a positive impact on UK cities in the future?

The everyday routine of commuting shapes our identity and affinity with place. Having a common interest with our fellow citizens, even if that starts with sharing the experience of a journey to work, underpins the democratic mandate for new government structures like Combined Authorities. Newcastle and Gateshead may have a healthy rivalry, but analysis of travel to work shows they are economically inseparable. The case for working across council boundaries on skills provision, housing policy and economic development is starker than ever.

In part, the shape of the map also shows us some of the failures of policies of the past. When green belts were introduced, just one in seven households had access to a car: today it’s 80 per cent. By constraining housing growth immediately around Oxford and Cambridge, in particular, green belts explain the large travel-to-work areas for these cities, as thousands of commuters drive across each city’s green belt to get to work each day. This somewhat defeats the original rationale: green belts simply displace, rather than prevent sprawl.

Housing economics come in to play too: expensive cities tend to be job-rich and high-wage cities, attracting skilled workers and low-paid workers from less job-rich areas.

What would we expect to see in the 2021 map? If the US experience is a precedent, the next decade will see a boom in “super-commuting” over larger and larger distances. This doesn’t just refer to rich eccentrics and oil workers who “fly in fly out” between weeknights and weekends. Regular daily commuting between the four major conurbations of the Northern Powerhouse – Merseyside, Greater Manchester, South Yorkshire (Sheffield) and West Yorkshire (Leeds) – increased by over 20 per cent to over 100,000, between 2001 and 2011.

But super-commuting will become harder to measure because increasingly people work under flexible arrangements: working from home on certain days, or ‘in the field’ at client sites or branch offices of their business. While this might be good for the environment and reducing congestion, we underestimate the negative impact a longer commute will have on our well-being.

Similarly, our strong preference for private gardens doesn’t translate as much as we’d like to think to well-being benefits: we may get more use and social interaction from well-designed communal green space in dense urban developments.

By 2021, London will have speedier links to its east and west thanks to Crossrail; this may allow its commuting footprint to reconquer corners of Essex and Berkshire. On the other hand, it is Heathrow itself that will see the biggest improvement in connectivity – via Crossrail and other projects. We’ll have to wait and see if the concrete is being poured on the new third runway, and if the claimed growth in airport employment materialises.

But by then, we may be lobbying to use our Oyster Card on HS2 all the way up to Birmingham.

This article was originally published in CityMetric.