Blog: Shifting the Narrative of Local

Last month the RSA, as part of the People Shaped Localism programme, hosted a roundtable entitled The Felt Local: arts based approaches to belonging and identity. RSA Associate Jocelyn Cunningham reflects on the insights from the roundtable regarding perceptions of what local means and whom this includes.

Have we lost our sense of belonging or are we simply finding new ways of defining who we are? At our roundtable, the Felt Local, participants engaged with a wide range of place-focused arts work from across England, from perspectives such as housing, local authorities, socially engaged arts organisations and artists, think thanks and academics explored responses to questions such as the one above and

Do the arts strengthen the sense of the local as a ‘felt’ place and if so, how?

How does a sense of identity that is connected with place intersect with policy reform?

The sheer variety of participants and the work they represent generated a rich and far-reaching discussion. I plan to write a few blogs on the insights generated by these conversations. And this word, local is where we began.

Dan Barnard, co-artistic director of fanSHEN theatre company in south London reflected on who he considers to be local, that challenges commonly held views: (in no particular order)

And given our digital age, this might open up additional considerations such as:

It is hardly surprising that our use of the word local frequently implies those who pay council taxes but this reductive usage profoundly misses both a collective sense of identity in a place and the importance of multiple perspectives. Ben Rogaly, professor in human geography from the University of Sussex spoke about the continual fluidity of communities and the importance of perceiving community as a verb, not a noun. And of course, communities are not homogenous, nor do people hold common values, beliefs and ways of being in a place through living and working there. I add working there because there can be the sense that community is separate to the delivery of services. There are multiple communities within any service as well. 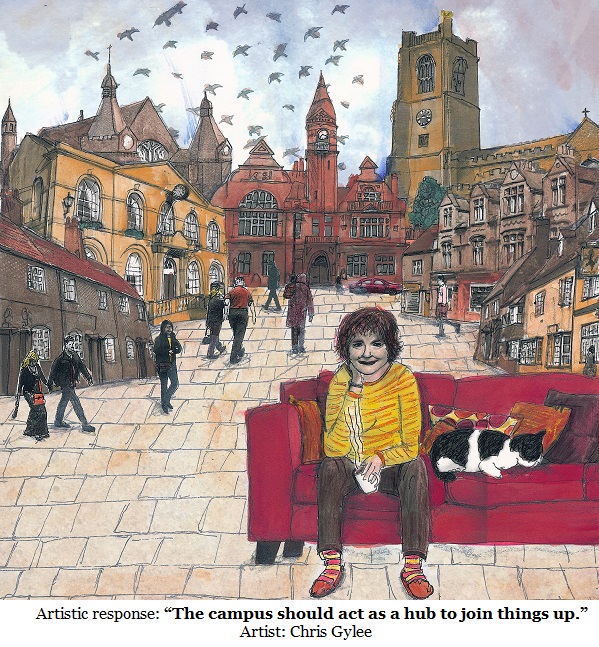 This complexity of communities can lend itself to wanting to manage this through siloing particular groups of people for targeted opportunities and services and seeing a place as characterised by discrete communities or worse, a set of needs and problems to be solved rather than an ever-changing web of relationships. It’s easier. If we agree that positive change lies in strengthening the social fabric of a place, then this cannot be about work with an ‘us’ and ‘them’ mindset but needs to shift to an ‘us’ mindset. We need to uncover, value and work with complexity.

Isolation and fragmentation are a part of all our everyday lives. Peter Block in Community, the structure of belongingwarns of the vital need to pay attention to this. “The effects of the fragmentation of our communities show up in low voter turnout…and the large portion of the population who remain disengaged.” Addressing this doesn’t always have to be onerous. Block refers to the simple things that can make a place work.“What makes community building so complex is that it occurs in an infinite number of small steps, sometimes in quiet moments that we notice out of the corner of our eye.” Ben Rogaly at our roundtable spoke of the value of smiling. Effective relational work, be it community development or socially engaged arts practice takes this nuance into account. Sometimes tackling something is about coming at it sideways. (more on this in the next blog)

Block and many others such as Tom Crompton in his report for Oxfam, Common Cause, stress the need for reframing the conversations and interactions we are having. “Conceptual framing (crafting working and phrasing to focus on particular issues) will not have an effect unless these messages resonate with a set of deep frames; there’s an important distinction between processes that lead to the activation of frames and processes that help to strengthen frames.” I suggest that policy-making sits within the first distinction in activating desired change and that cultural processes (not just the arts) strengthen deeper ways of relating to each other and places. And the latter needs to be about experiences. Dave Yates in his RSA blog put it well: “community is something you do, not something you are.

Consideration of how to reframe perceptions of community and what it means to be local is a critical first step, especially now with devolution planning, rapid changes in demographic identities and movements of people across the world. Another participant in our roundtable, Alice Sachrajda described the work she recently was involved in with the Young Foundation in Northern Ireland. Their report adopted a storytelling approach on the subject of migration that revealed complex perspectives and meant that the narrative was able to reveal layers of meaning and not get mired in positive or negative frames. Deirdre Figueiredo of Craftspace spoke of their project Shelanu, a craft based social enterprise with migrant and refugee women in Birmingham and how vital it was that the expression of identity came directly from those experiencing it, not mediated through others. Deirdre added the notion of the ‘made’ local to the ‘felt’ local. “It’s not just about the big stories. What about the small but equally powerful stories? Empowered cultural citizens sharing their skills, their experiences of belonging with a determined stake in place shaping.”

I had thought that much of this blog would be about how arts based practices can address these fundamental conditions in identity and belonging. Certainly we shared common methodologies that crossed artforms and approaches but perhaps a shared understanding of our starting points is more critical. Too often the arts is commissioned as a tool for celebrating place and community and not on uncovering the nuance of people’s experiences and making these visible. With increasing commissioning of services and the need to evidence social value, there is recognition that the arts can support the more intransigent challenges. Nevertheless it is also vital for the cultural communities to consider these bigger pictures and the interconnectedness of working in places whether this is within health, education or any social sphere. There is an important matter at stake as François Matarasso suggests in Whose line is it anyway? The creation of a poem for Ledbury: "The question is not just how people participate in an artistic project but how they can participate in a democracy.”

There is emerging evidence of how arts based practices can strengthen active citizenship. Recent research at the Crick Centre at the University of Sheffield examined how participatory arts influenced greater political engagement with young people.  The RSA already has a track record in exploring the role of arts and imagination in creating new connections between people and where they live in order to strengthen participation in community life through Citizen Power in Peterborough. Evaluation of the Arts and Social Change programme examines how a multi-modal arts approach to addressing attachment to place can be effective in strengthening civic engagement and local decision-making. What was not explored was where identity intersected with the notion of citizen. With increasing numbers of initiatives that are focused upon citizen voice and place shaping, there is a need to better understand how we perceive ourselves within where we live and work.

Last weekend’s Observer article, Remade in Dagenham reflects upon a subtle, positive shift in the perceptions of place and identity in Dagenham and describes an approach that the local Creative People Places initiative is taking. It has built a network of fifty ‘cultural connectors’, local volunteers who act as decision makers regarding which artwork is commissioned and how this artwork relates to their place and needs. “There’s a real sense of disempowerment here with the closure of the factories and all the headlines about Barking and Dagenham” says programme director, Miriam Nelken. “This is about enabling people to think that they can do stuff, they do matter and they are part of history.” The stated priority of the Leader of Barking and Dagenham council, Darren Rodwell is to restore a sense of civic pride and he feels that the arts are central to this and the development of greater community cohesion. “The arts are the glue that brings people together and if we don’t make people think they’re part of something, you get isolationism and then you get extremism, and you get the situation we had with the BNP.”

The process of creating together is an essential one. It transcends the product, be this policy, social change or artistic. François Matarasso, again: “There are signs, here and there, that people are discovering new ways of working with people to create alternative, more democratic and fairer spaces in our artistic and cultural life…a practice that still has so much to offer a society undergoing change.”

There is not a single set of practices (such as socially engaged arts) that enables empowered civic spaces but there are principles and conditions that underpin methodologies that are able to work with complexity.  How we work together with these principles and conditions and better understand these methodologies is the natural next step in our debate and one the RSA will be looking at with the next roundtable on Platforms for Collaboration.