A week on from England’s exit from the Rugby World Cup and the British media’s predictions that over £3bn would be wiped off the UK stock market in a single day were proved unfounded. This weekend the tournament carries on into the quarter finals, but once the winners have held the cup up high, questions as to its legacy and the value of hosting big sporting events like it are sure to be back on the front pages.

There is no doubt that there is big money in these events, but it is arguable that even if England had won the cup, it wouldn’t be the uplift in pub revenues and ticket sales that we would care about. It would only really be deemed successful if it inspired some other lasting social value – a legacy of rugby participation perhaps, or an enduring spirit volunteering that engaged a new cohort of civic minded people to “do their bit”.

In the run up to London 2012, the UK public were very skeptical about the benefits of the Olympic Games and the £9 billion of public money that went into it. But thankfully,  through of a combination of good design (the regeneration plans, the opening ceremony, the volunteering programme) and a large measure of good fortune (the weather, the gold medals), the event became, as Boris Johnson put it last week: “[a time when] Britain was crop-dusted with serotonin and the Games themselves were utterly spectacular.”  Three years on and it is now part of our cultural heritage and quite a source of national pride. (I must ’fess up that I used to work for London 2012, and so by nature I am a fan).

The big questions really arise once the show leaves town. How do you guarantee a lasting social benefit? Professor Scarlett Cornelissen of Stellenbosch University has raised doubts that major sporting events can ever have intrinsic social benefits in her study of the South African World Cup in 2010 which showed that South Africa spent $85.7 billion on the event, but that volunteer, community and sport development projects after the tournament struggled to materialise. With the Olympics, there are many other host cities that have seemingly failed to derive the long term value that notable successes like London and Barcelona can claim.

So how do cities planning for big events avoid falling into this trap? I was in Japan last week with the British Chamber of Commerce to talk about the lasting legacy of volunteering that mega events can have. Japan is in the early stages of planning for the Tokyo 2020 Olympic and Paralympic Games and The Rugby World Cup 2019, and it is this critical moment when they must plan for a legacy of community participation.

Building on the RSA’s recent research into volunteering, I met with leading figures in the Japanese government and voluntary sector to discuss volunteering from a UK perspective and consider how our approach to volunteering might work in Tokyo.

In the run up to London 2012, it was the organisers mantra to say that “75 pence out of every pound is spent on legacy” and the plans were designed not just for Games time, but for a 40 year legacy of urban renewal, sporting participation and volunteering. While there have been both successes and failings in these areas. The volunteering infrastructure that London 2012 set up has indeed shifted the face of volunteering in the capital – building on local pride, which as our recent research report points out is a key component of sustainable volunteering efforts, as this quote illustrates:

“The life of volunteering is largely played out locally. It is shaped by our local relationships, our participation positively affecting our sense of place and community. That sense of community and belonging may be as significant for volunteering as levels of income.”

There were 70,000 volunteers chosen as Games Makers for the Olympic and Paralympic events as a whole, but it is the Team London Ambassadors programme, established by the Mayor of London, which focused on Londoners themselves. It gathered 8,000 volunteers to man airports, stations and tourist centres, and has since run a range of pilot programmes in the capital with a further 800 Ambassadors giving more than 15,000 volunteering hours and reaching over 250,000 visitors to London.

So what does Japan need to do to ensure it captures the Tokyo’s volunteering potential? Starting with RSA fellows might be a good idea. During our trip we hosted a gathering of our RSA fellows and friends in Tokyo (see below) and we were delighted to learn about the diverse range of social and civic efforts that the attendees were working on. 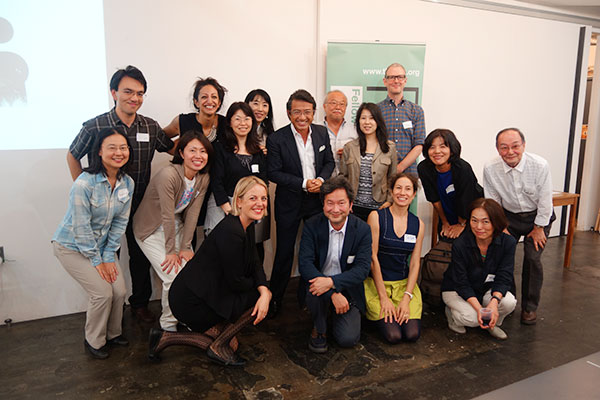 For example, at the event I met Mie Kajikawa, the founder of Sport for Smile (pictured second from left in the middle row). Sport for Smile is a non-profit organization dedicated to having a positive social impact through access to sports. Kajikawa believes in the power of sport to improve society and change the world, and while working as part of the Tokyo Olympic Bid Committee, she saw the big movement at the global level to use the power of sport to change the world, but when she looked at what was happening on the ground in Japan, she felt it wasn’t being delivered locally, so she set up a social enterprise to change that.

For Tokyo 2020 to succeed with social value, it will be this spirit of social enterprise – along with the sound planning and good governance of the volunteering programme – which will make for lasting social benefit. 2020 may seem a long way off, but now’s the time to start designing for legacy.