This is the fifth in a blog series by Keith Harrison-Broninski FRSA, which explores a new way for cities, towns and rural communities to tackle the effects of austerity. The series explains the ideas behind the approach, how it was initially proven within the NHS, and how it has now become a larger scale initiative - Town Digital Hub - that is being supported by the RSA.

The Chief Economist of the Bank of England, Andrew Haldane, said in 2014 that "volunteering in the UK [is] not far off 10% of the total hours worked by all UK paid employees", with an economic value that "could exceed £50 billion per year, or around 3.5% of annual UK GDP" However, Haldane notes, "very little of the value created by the volunteer sector is easily visible to statisticians, to policymakers, to politicians, to companies, indeed to the volunteers themselves." 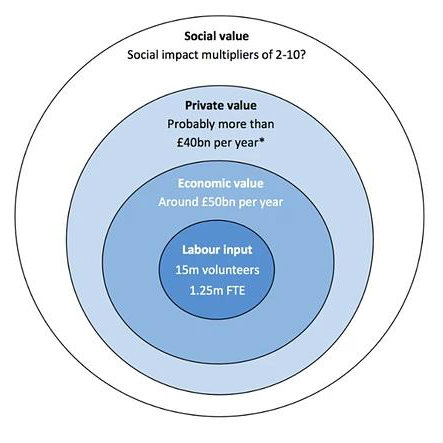 The Bank of England's calculations mean that the annual financial benefit to a council from using a Town Digital Hub (TDH) to incorporate volunteer effort into public services is in the millions even for a small town. If you'd like to see what the benefit would be to your own town, try the TDH Benefit Calculator.

Haldane goes on to observe: "the private benefits of volunteering – well-being, health, skills – might be as large, if not larger, for volunteers themselves as for recipients." It's a clear win-win! So why is the value created by volunteering rarely well measured or understood?

Haldane suggests that government consider a number of "policy nudges".  However, these are not the structural changes needed because "if volunteers comprised a single country, ‘Volunteerland’, it would have the second largest working age population of any country in the world, behind only China."  How can government streamline the use of unpaid effort to help deliver services to the public, when their policy is to create a free market for public services provision?

The 2013 report from the Institute for Government, "Making Public Service Markets Work" said that "In almost every area private, public and voluntary sector, organisations compete for the right to provide our services ... The impact of this vast shift is not well understood."  However, as solution strategies, the report just recommends more bureaucracy to beef up oversight.  Government tends to take a top-down, command-and-control perspective - whereas if you take a grass roots, connect-and-collaborate perspective, then new solutions emerge, such as TDH.

However, this does not explain how TDH could handle a critical operational element of public services provision.  What kind of service contracts are required to implement TDH collaborative services? Many third sector organisations and small local businesses do not have the assets, resources, and insurances required to sign the service provision contracts issued to large commercial companies.  More generally, if services are to adapt to the changing needs of the community, then a commissioning approach that seeks to lock providers down into detailed service guarantees is not going to deliver optimal results.

The need for a new approach to public services contracting was acknowledged by the Local Government Association in their 2013 report "Making savings from contract management". As a solution the report suggests that councils strengthen, enforce and institutionalise sophisticated contractual conditions such as revenue sharing and penalties. It's the "more bureaucracy" solution again!  Not only will the private sector out-maneouvre the public sector every time when such contracts are on the table, but they will certainly scare away most community organisations. Furthermore, the approach only delivers savings only of at maximum 15% and as low as 3% - nowhere close to the third that council budgets have been cut by since 2012 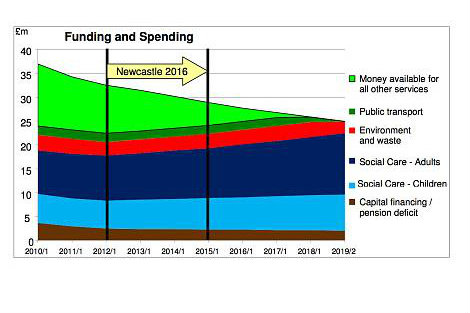 A truly collaborative approach to contracting needs to take certain things on the chin. The only sure-fire way to ensure that public services meet public needs is for the providers to become at least as motivated as the public to succeed.  Just as the government is seeking for energy tariffs, we need new public services contracts in which all the complex terms and conditions are replaced by a simple option to change provider at any time.

In other words, the red tape generated from fear of failure must be replaced with the flexibility generated from transparency. Hundreds of pages of legalese must be replaced with a simple statement of who the providers of a collaborative service are, what is expected from them, and how they will be recompensed.  These are the first 3 of the 5 Cs - Commit, Contribute, and Compensate - so they are provided automatically by a TDH collaboration plan, which also provides the fourth, Calculate, (for triage of work items) and the fifth, Change (for on-going service re-negotiation).  So it isn't necessary to issue contracts at all on the back of a collaboration plan - the plan itself is all that is required!

Replacing legal contracts with collaboration plans for services provided collaboratively may seem radical, but is it viable to continue using legal contracts in their current form?  The government itself acknowledges that the current system of contracting is deeply flawed, and councils may be unable to leverage community effort to improve and cheapen public services without fundamental change to the current approach.

Suppose that, for some forms of public service, in place of standard legal contracts councils were to use collaboration plans (reinforced as necessary by adding plain English text of the "for the avoidance of misunderstanding" type). Certainly councils will save a lot of money on solicitors' fees - and what is the worst that could happen?  If a court refused to recognise the collaboration plan as a written agreement - which is unlikely - then services could fail without the council being able to claw back from providers monies already paid, or to claim additional penalty payments.  Ask anyone involved in public services administration, and they will confirm that this is already happening, and it's usually made worse not better by current legal contracts.  Often commissioners do not even make an attempt to penalise providers, since (as acknowledged by the Institute of Government report) they are too dependent on continuation of the services provided to risk rocking the boat.  With a collaboration plan, on the other hand, if services fail then it is much simpler and quicker either to change provider or to improve the services - which is what the public needs, and which should therefore be the primary goal of the commissioners.

Collaboration plans not only offer the opportunity to devise new forms of recompense, such as bartering schemes, but they also introduce vital transparency into sub-contracting arrangements.  A collaboration plan can contain sub-plans whose details are visible, permitting oversight that is very hard to obtain via legal agreements.  In a networked world where organisations of all kinds depend on supplier, customer and partner arrangements, the use of nested collaboration plans allows commissioners to ensure that members of the public are being provided with robust, safe and cost-effective services.

Radical situations such as austerity demand radical solutions, and collaboration plans are actually less risky and expensive than what we have now.  In the next and concluding instalment of this blog series, I will look at how TDH introduces similar improvements to grass roots politics.  Stay tuned!

I would welcome any feedback on the blogs and the project. It would be great to hear your own ideas and experiences in comments – we seek to engage with communities both across the UK and internationally, so if you would like a digital hub for your own community (town, city, neighbourhood, district, county, or non-geographical) then please do get in touch directly.