So the delegates decided right there and then that the best way to solve it was to meet up again.

And to decide on a future that’s greener and greater. Not with action now…

But with something else, later.

Abbreviated version of Comedian Marcus Brigstocke on climate talks, in the style of a Dr Seuss poem, performed at the RSA (from 6.00)

Today marks the start of a major global summit on climate change in Paris, a UN ‘conferences of the parties’, or cop. These cops have been on the move since 1995, and what’s happening in Paris is ‘cop21’, which should temper expectations of a quick fix. The word on the street is that there is significant optimism about the direction of travel, but enduring pessimism about the extent of the resolve and the speed of proposed action.

I’ve been thinking a lot about climate change over the last few weeks while writing our forthcoming report: Money Talks: Divest Invest and the battle for climate realism. That report helps contextualise what is at stake in Paris, how we might keep the pace of any momentum created there, and it will be published on Thursday, alongside the final RSA Seven Dimensions of Climate Change event which features Tim Flannery and David Attenborough.

When he spoke at the RSA as part of this series, Lord Nick Stern, who is deeply involved in the negotiation process, spoke of Paris Cop21 in evocative language:

“Even with all the leaning over backwards and soft shoe shuffles, they won’t be able to pretend it’s a two degree agreement.”

For those not in the know, two degrees Celsius above pre-industrial levels is the climate policy touchstone. As outlined in the forthcoming report, two degrees is a bit arbitrary, but in a hugely complex issue you need to find some fulcrum and focus. Crudely, this target is widely thought to be a necessary evil – it’s bad (possibly disastrous) but we can (maybe, on a very good day, with lots of solar and a following wind) just about do it, and adapt when get there. The planet has already warmed to one degree, a further half a degree or so is locked in, and so barring a positive black swan event, we’ll get to two degrees before the middle of this century. These averages sound low and unthreatening, but ecosystems are delicate and tiny changes often have huge knock-on effects. To give that point some immediate relevance, the floods that hit British communities in 2013/2014 are thought to have been seven times more likely to have happened because of existing warming, and that’s in the relatively protected UK. The key then is to pull the breaks on really sharply to prevent things getting worse.

Since I’m steeped in climate stew, I should write a sober assessment of what to expect in Paris, but when I started thinking about ‘cops’ I got a bit carried away, and since the report is a serious piece of work, my trope of choice today is more playful.

As the negotiators hammer it out above, there is an imaginary interrogation room hidden deep inside the UN territory of the Paris COP21, where there’s a parallel battle for the planet going on. A good cop and a bad cop have to elicit an emotional reaction about climate change from a global everyman/women. Without their involvement, there is little hope in the longterm. I’ve called this person Usota: unknown soldier of the Anthropocene.

Good cop: You know Usota, I get it. I understand. You are not built to feel anything about climate change. That Professor Dan Ariely was right when he said “If you wanted to invent a problem humanity wouldn’t care about you would come up with global warming.” So I don’t blame you, but I need you to care because there really is hope. We’ve got momentum Usota. We got the big guys: USA and China talking and acting tough. And we got the investors starting to move their money; they can smell that coal, gas and oil are the past, not the future. People who got rich on the stuff are now ditching it and putting their money in the sun and the wind and the batteries that will store it. And solar energy, by God, it’s becoming so cheap and easy that we’re gonna have solar powered eye glasses before you know it. And we’ve got the Pope, Usota, the Pope! People see that it’s a moral issue now.

So we have a direction of travel- we’re just a little slow, that’s all, so we need to keep the public pressure to make the difference. So keep paying attention, stay in the game. Shall I get you some coffee? (Good cop leaves the room) 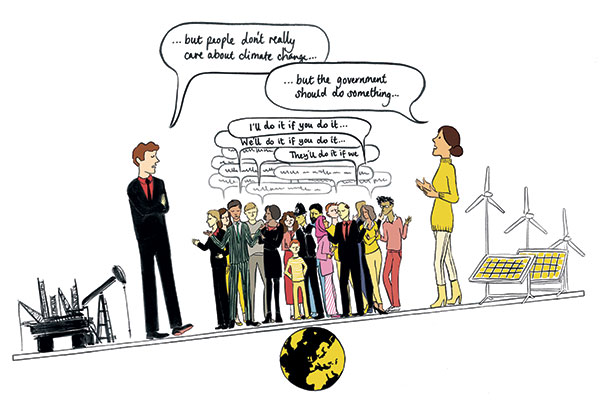 The Seven Dimensions of Climate Change: Democracy.
Political power lies with fossil fuels and we need to move towards renewables. Collective action problems are pervasive, with the fate of the earth in the balance.

Bad cop: The game’s up Usota. It’s hopeless. You heard of a two degree world? Well there’s no chance of that, and that was our only chance. British Climate diplomat John Ashton put it as follows, and he wasn’t joking: “Two degrees was not a casual reaction to civil society impossibilism. It was a political judgement, informed by science, about the threshold beyond which climate insecurity is likely to become unmanageable.”

The situation is grim Usota, utterly grim. You see those countries in Africa, in India, in China, in Brazil, you think they’re not going to use their coal? You think capitalism can ever really care about something other than profit? And you hear all that talk of binding commitments Usota? Binding? How’s that gonna work over about 200 countries and 20 electoral cycles? They say they will find a way to help the developing world ‘leapfrog’ over the carbon intensive phase of development, but who’s going to pay for that? Can you imagine anybody in a developed country voting for that? Taxes and higher bills so that other countries can take even more of our jobs? No chance. And fossil fuel companies will remain powerful as long as they’re the best bet for keeping the lights on, which they will be for a while.

Solar, onshore wind, offshore wind, yadda yadda yadda…look at London, look at Beijing, look at Delhi – you see those cities being powered any time soon from a few rays of sun and a few gusts of wind? And that’s before we think about population growth and continued economic growth. So despair Usota, because our only hope is that the Scientists are wrong. (Bad cop turns up the heating and leaves room).

Good cop: Don’t let him get to you, Usota. For starters you’re not alone; last September about 600,000 people around the globe marched for action, widely reported as ‘the day the world woke up to climate change’. A year later we learned that $2.6 trillion in assets had already been committed as divestments in fossil fuel stocks, suggesting that the climate divestment movement is one of the most successful social or environmental movements ever.

Now it’s not just about carbon dioxide, and it’s not just about energy, but people are getting focussed and the penny is dropping that we’ve got to keep fossil fuels in the ground. And Paris may not give us a two degree world, but it will keep us on track to stay under three degrees, and once we’ve narrowed the range of risk, we can tighten still further. Political leaders seem serious about this for the first time…so don’t despair.

Bad cop: Politicians lie all the time. Scientists…well they may not lie as such, but they want to be relevant to policy, and they are under pressure to say that a viable habitat is still within reach. Most projections for a stable planet include far-fetched technological breakthroughs. We have simply failed, and we’re systematically underestimating risks of melting permafrost which will start happening soon. West Antartica and much of Greenland will be in a liquid state before long. Get out while you can.

Good cop: Out? Where? It’s like this Usota. We wake up to the full reality of the problem as soon as we can, and we do everything we can. We gradually stop using fossil fuels, we get serious about renewables, we plant a lot of trees, we live in efficient cities, we find a way to transfer capital from the developed world to the developing world to keep their coal in the ground. Fossil fuel companies become allies because they start to focus on renewable energy. Once we see all that happening we can start believing that it makes sense to reduce energy demand. It’s asking a lot, but we can do it. 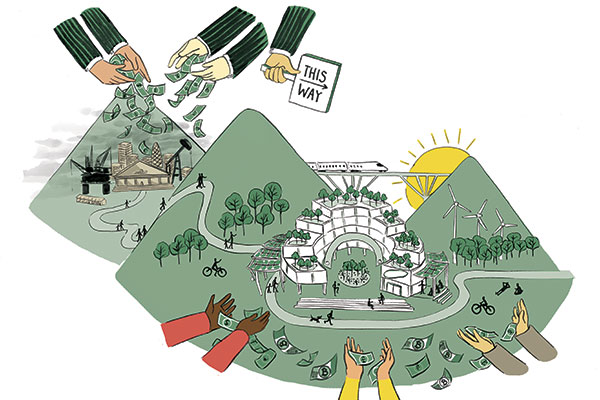 The Seven Dimensions of Climate Change: Money.
We need to transform the energy basis of the economy, which means investors need to see that the future is in renewable energy rather than fossil fuels.

Usota: You are both as bad as each other, but here is what I have understood. The climate challenge is a political battle to establish what is realistic, and it is up to me to shape that reality. Let me out of here, and I’ll see what I can do.

Dr Jonathan Rowson is author of Money Talks: Divest Invest and the battle for climate realism, published on the RSA website on Thursday December 3rd.