Blog: I always thought, if this works it’s going to spread around the world

I read an interesting interview with Jon Kabat-Zinn the other day. His name might not be on the tip of everybody's tongue, but most people have come across his work in some shape or form. 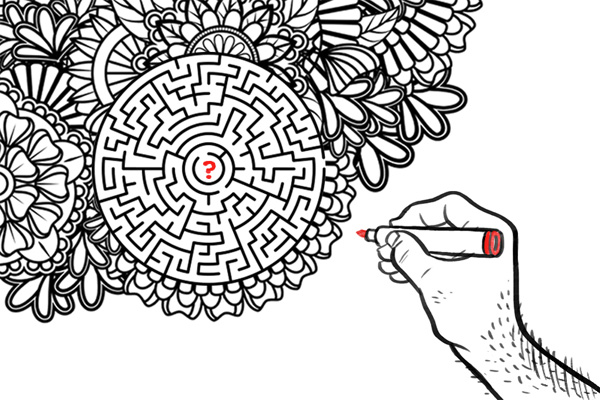 Whilst studying at MIT, Jon was introduced to Zen meditation by a Zen missionary. I didn't know Zen missionaries even existed! This discovery was the catalyst he needed to develop what we know as Mindfulness-Based Stress Reduction (MBSR) or 'Mindfulness' for short.

If you go into any bookshop today, you will find more than a dozen books about mindfulness and as Kabat-Zinn points out in the article, 'Everyone and his sister are running mindfulness workshops'.

In a similar vein, if you cast your eyes across the shelves of the very same bookshops and newsagents, you’ll probably see twenty different colouring-in books and magazines. There is an avalanche of publications that in essence give you a portable Zen garden on paper.

So how can we tell one good Mindfulness book from another? And how can we decide which calming colouring book will really help us reach the desired Zen-like state? This glut of 'products' all vying for our attention is slightly ironic when the whole idea is to engender a sense of calm! This makes me think back to an RSA Animate that we made from Renata Salecl’s RSA talk on 'Choice'. In it Salecl explained that too much choice is actually really petrifying – a psychological stun gun of sorts!

In some ways I can understand where Kabat-Zinn is coming from. When the idea for the RSA Animate process emerged back in 2008, it didn't just pop out of nowhere in some kind of ‘Eureka!’ moment. Ideas develop over time in the form of slow hunches, and often involve a number of people and a few evolutionary stages.

Just like the trend for colouring-in books is causing the bookshelves to creak, our RSA Animates have created an online world absolutely packed with so-called 'Whiteboard Scribe Animations’. Even though I was key in making the medium happen, I can't help but be overwhelmed by the amount of these animations out there. I am amazed that we made something that could be deemed its own bonafide media, and I love the way it is democratising knowledge in such a powerful way.

But here’s the thing. It isn’t just pretty pictures sped up! I have been involved in Scribing for nearly 20 years and I have been a visual thinker all my life. That's a lot of thinking and drawing! I am always keen to understand my discipline and practice, and I think I know why RSA Animates are so successful.

It’s not that they’re simply a fun, visually interesting 'style', or that the images are a nice thing to watch whilst you listen to some great ideas. I’ll let you into a secret: RSA Animates are a visual rendition of my own cognitive processes. I have always approached them as my personal visual thinking maps – it’s just an amazing and happy coincidence that the world finds them helpful too!

A lot of people want to harness what they see when they watch an RSA Animate. What they don't understand is that the process is very organic. It's a live conversation with myself and the content over a considerable period of time. I spend a lot of time unpacking disparate elements and fashioning them into blocks of meaning in interlocking space. This process is messy and mostly private, and always subject to change and creative shifts.

I was listening to Sam Mendes talking about making 'Spectre' today on Radio 5. He said that making a film is actually quite a private process - even something ultimately as public-facing as a Bond juggernaut. I tend to agree with him here. It was interesting to hear that although a lot was at stake with a lot of stakeholders in making the new Bond movie, he had the total creative support of Eon productions, the studio and owners of the Bond franchise.

On a far smaller scale (and with fewer explosions!), I think of the relationship I have with the RSA. Innovative creativity can only flourish when there is this level of trust on both sides. This trust was built as we worked out what we were doing in the very early days of creating RSA Animates.  I’m well aware that most institutions are risk-averse, and sometimes message and meaning are signed off by a committee of well-meaning individuals. "A committee is a cul-de-sac down which ideas are lured and then quietly strangled " said Sir Barnett Cocks (1907 - 1989) who happened to be Clerk of the House of Commons…

The work we do for RSA Animate is a rare and special thing. It is a truly unfettered collaboration and exploration of ideas between an organisation and an artist. It is a ground-breaking way of helping people engage with world-changing ideas, and it is astounding to now see the proliferation of animations in its wake.

Sadly RSI (Repetitive-Scribing-Injuries) put me out of action for a bit, but my hairy hand is back and my Sharpie is black! How are you fixed for the 15th December?