Building communities is not only intrinsically good; it can benefit the economy and public services too.

This article first appeared in the RSA Journal Issue 4 2015

In an era of severe austerity in public services and with no sign of a more generous public funding settlement on the horizon, policymakers and politicians of all shades are increasingly looking to communities to play a bigger role in contributing to public life. From David Cameron’s flagship ‘Big Society’ agenda to a new NHS strategy that states the intention to harness the ‘renewable energy’ of patients and communities, the UK government has expressed the desire to see resilient communities that are better able to support themselves and reduce pressure on public services. These strategies are not always successful in their efforts to understand what communities are and how they function. Over the past five years, the RSA has been exploring communities in depth, and we suggest that it is in the connections within communities – the relationships that link people to other people and institutions – that these benefits might be found.

Social relationships, simply put, have value; indeed the concept of fellowship is as much a part of the RSA’s DNA as are creativity and innovation. The organisation was formed in 1754 to encourage the ‘arts, manufactures and commerce’ of Enlightenment ingenuity, but it was created as a ‘Society’, in appreciation of the fact that, without sympathetic others with whom to share ideas and from whom to gain support, encouragement and companionship, the individual’s power to create stands little chance of being realised. The belief that the source of the ‘good life’ is in the connections and interactions between people is the core of just about everything the RSA has ever done, from our origins as a coffee house meeting place, and the establishment of our formal Fellowship to countless networks and social movements.

The RSA’s Connected Communities work sits within this tradition. This autumn we published Community Capital, the final publication of our five-year programme, which explored the importance of social relationships and how we might understand them better in order to tackle the problems of social isolation and low mental well-being in deprived communities. The report explains how working with local people to invest in ‘community capital’ – the potential assets that lie within the positive relationships and connections that all communities have – can create a range of significant individual and collective benefits. These benefits include:

A wide range of partners and collaborators contributed to this work, including: academics from the Centre for Citizenship and Community at the University of Central Lancashire (UCLAN) who ran the programme with us; an economics team at the London School of Economics’ (LSE) Personal Social Services Research Unit, which conducted an economic evaluation; formal delivery partners in each project location; and an army of volunteer community researchers. With these partners, we surveyed almost 3,000 people in seven locations around the country about their subjective well-being and the networks of people who are important in their lives. We then reflected this data back to communities, so they can see the strengths and deficits of their local areas, and then worked with local people in each area to co-produce new social interventions. This kind of collaboration was key to the programme and emblematic of the social network approach advocated throughout the lifetime of Connected Communities: good things can happen when people come together to collaborate on a common endeavour. 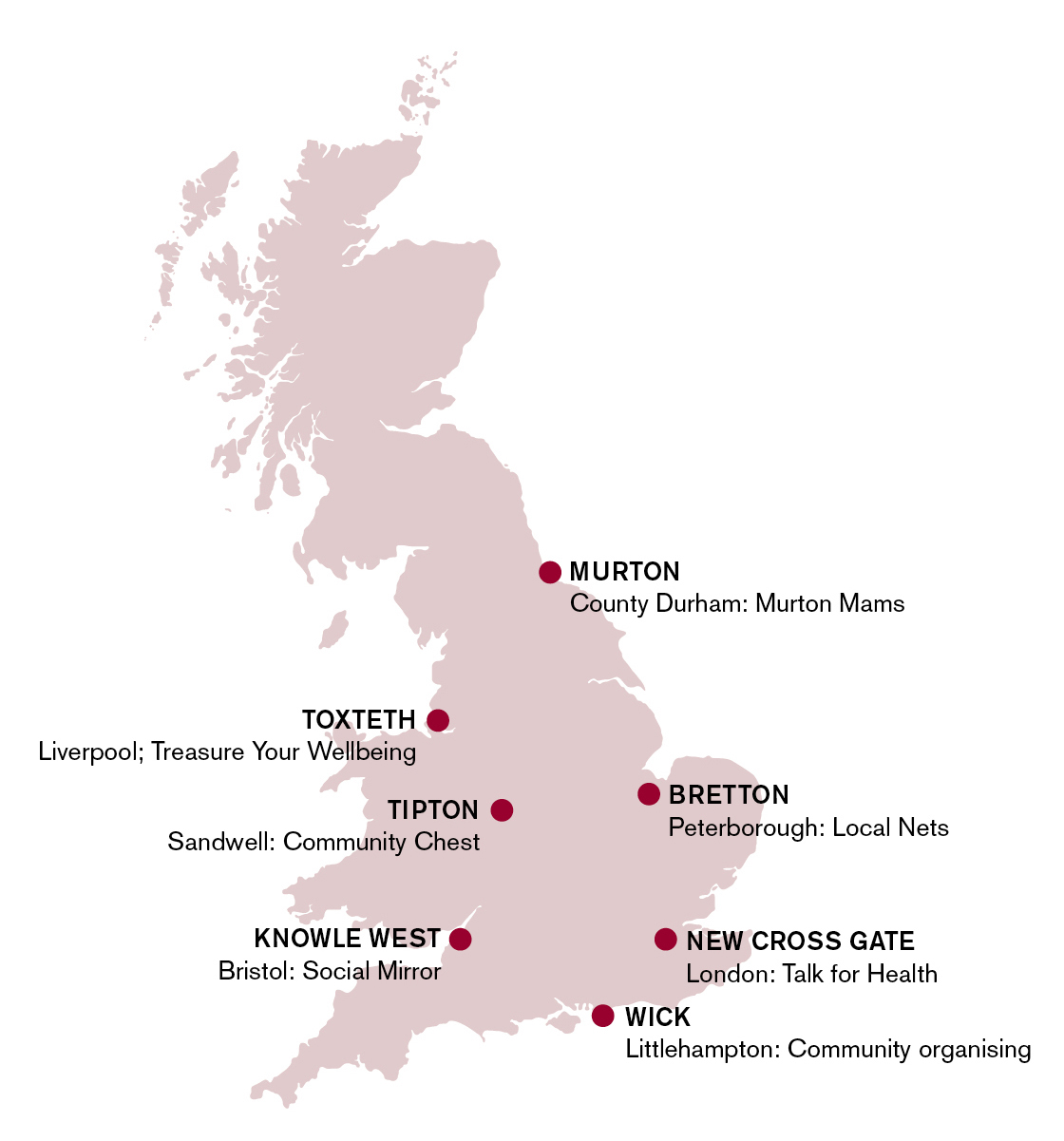 Our report concluded that investing in interventions which build and strengthen networks of social relationships can generate four kinds of social value or ‘dividend’ shared by people in the community.

Second, a citizenship dividend. There is latent power within local communities that lies in the potential of relationships between people. However, access to this power is uneven, and many people do not enjoy the full benefits of active citizenship: for example, 60% of people we surveyed at the beginning of our research could not name anybody they knew who had the power or influence to change things locally. Conversely, our method of working with people to reflect upon their social relationships and the under-used assets in their communities and social networks led to substantial positive effects on personal empowerment, and higher levels of civic participation and individual and collective agency.

Third, a capacity dividend. Concentrating resources on networks and relationships, rather than on the ‘troubled’ individual as an end-user, can have beneficial effects which ripple out through social networks, having positive effects on people’s children, partners, friends and others.

Finally, such an approach can generate an economic dividend. Researchers at the LSE analysed the economic impact of some of the RSA’s interventions, and sought to quantify the potential of social relationship-based interventions for notional savings in public finances, as well as contributions to the wider economy. The evidence here and elsewhere has shown that investing in interventions that build social relationships can improve employability, improve health (which has positive economic impacts) and create savings in health and welfare expenditure. One pilot study – a social group set up by and for single mothers in County Durham – found that strengthening people’s social networks reduced their use of certain health services by up to 34%.

These dividends can be achieved by a managed approach to unleashing the value of community capital; like other forms of capital, this can be increased, reserves of it can be unlocked and putting it to use can bring about great social, economic and personal benefits. We arrived at these findings not through theorising, but through extensive on-the-ground practical experience gained from working within communities. From Murton, a village in County Durham, to New Cross Gate in London, the seven localities we worked in varied in their characteristics, assets and patterns of social connections and isolation. In each one we worked with local people to test new approaches to improving the social networks of support and connection among residents. But, while this local approach is critical, all communities, social networks and individuals have assets that can help to create community capital and generate social dividends.

The Connected Communities approach developed iteratively and can be summarised as ‘understand, involve, connect’. To take one of the most notable examples: in Murton this approach was successfully employed to develop an effective new peer-led model for reducing isolation among single mothers in the village, with researchers first working to understand the networks of social relationships in the area, involving the affected people in a response, and developing a means by which people could better connect to one another in order to enjoy the benefits of improved well-being.

At the outset of the programme, analysis of a survey of around 400 adults in the village revealed that single parents were particularly vulnerable to low well-being caused by social isolation. In response, Dr Manjit Bola from UCLAN worked with the community development charity East Durham Trust and the local NHS trust to convene a series of workshops with single mothers from the village. The aim was to gain additional insight into what problems single mothers faced in the village and what might help to address these problems. Participants spoke of how their daily routines and obligations had led to deep loneliness, with informal contact with other adults  a rarity and the television often the chief companion.

Considering what might help them, the women spoke of the desire for “somewhere to go” where they could socialise with other people in an informal and non-bureaucratic setting. Murton Mams was set up as a response, with the participants at the original research workshops and several other mothers (mostly but not prescriptively single parents) meeting once a week at an informal morning club incorporating a crèche, kitchen and sitting room in a village community centre.  The peer support, social enjoyment and entertaining activities (from cookery classes to massage therapy sessions) available at the club have seen the Murton Mams group continue for two years so far, with the local NHS trust funding the replication of the model in a number of other villages in east Durham.

The form of the co-produced interventions in other Connected Communities sites took on a different shape. In Knowle West, a district of Bristol, research revealed that high numbers of local people were relying on doctors for social support, and were unable to mention any other people in their personal networks who they could go to for advice or support. Meanwhile, other residents spoke of a wealth of local amenities, clubs and classes available in the local area; these were apparently unknown or unused by those isolated individuals who were presenting frequently at the  GP surgery.

With the support and input of local voluntary and community groups, the RSA worked with colleagues from the Massachusetts Institute of Technology and Knowle West Media Centre in developing a digital ‘social prescribing’ tool, the Social Mirror app, a touchscreen multiple-choice survey conducted by volunteers on tablet computers in GP waiting rooms. Targeted particularly at older adults, the app was used to help assess whether a user might be socially isolated, and if necessary suggest a local social club or activity that they could take part in and meet other people through, for example walking groups, lip reading classes, or history clubs.

Connected Communities demonstrated the value of working to stimulate community capital. The ‘dividends of community capital’ in reality meant that a number of previously isolated people who took part in these projects had the confidence, connections and motivation to get jobs, take up university or college courses, or start volunteering in their communities to help others. Some noticed improved relationships with their families or colleagues, or reported health benefits such as losing weight or no longer needing anti-depressant medication. Our evaluation of some of the pilot projects showed that participants were using medical services less than they had done before, and that their self-assessed life satisfaction and mental well-being had improved by an average of 20% on common survey indicators.

At any time, but perhaps especially during a prolonged period of austerity, when public services can ill afford to miss opportunities to achieve more sustainable outcomes for their service users, there are great advantages to be gained through statutory services gaining an enhanced literacy of community. Implicitly or explicitly, they should ask their service users the question: “What is your community as you yourself understand it, and how might we protect, maintain, improve or support your access to it?” Professor David Morris from UCLAN, who worked on the programme with the RSA team, has cited the sociologist Amitai Etzioni in describing the advantages of such ‘communitarian’ approaches; building community capital is good per se, as well as purposeful and practical. Reduced public expenditure, small economic boosts, and a boon to rates of volunteering and civic participation are all to be welcomed.

The essence of fellowship, which the RSA has always valued so highly, is that something like the ‘good life’ lies within people’s relationships to others. As the moral philosopher John Macmurray observed, while through the efforts and laws of society we pursue various means to an end, a community – that state wherein people “are in communion with each other and their association is a fellowship” – is an end in itself.

Find out more about the Connected Communities project