Imagine the capital without the kaleidoscopic diversity of small businesses from Chinatown to Brick Lane, Columbia Road to Portobello Road, and the myriad of markets from Walthamstow to Brixton. It would be a hollow place, with only its silent monuments distinguishing it from everywhere else.

But if we don’t seize opportunities to ‘make connected’ through collective, strategic and urgent action for public spaces in our cities we will simply have no space left in which to make anything. A starting point then for 'making community with meaning' through decentralised collective innovation is to “make and remake our cities and ourselves” (David Harvey, The Right to the City, 2008).

The displacement of existing communities, tenants and occupiers is becoming commonplace as cities like London are redeveloped. Money looks for returns in the property market, and whole neighbourhoods are redesigned as a result. Sometimes cherished homes are lost; often new developments replace spaces for work, employment, entrepreneurialism, culture and community.

The phenomenon is well documented. “This is a vast challenge that is about more than counting bedrooms”, wrote Rowan Moore in The Guardian last year. The article quotes Anna Harding, Chief Executive of Space Studious in Hackney Wick: “Of course there’s a housing crisis… but there’s also an employment space crisis. It includes highly professional artists and creative businesses, the self-employed and sole traders that are the future of employment.”And there is consensus from across the political spectrum. In December last, the British Property Federation published a report on the importance of the industrial sector for economic growth.

Yes, the competition for space is fierce - but I believe the broad interest creates opportunity for solidarity between small enterprises and civic communities that is yet to be harnessed and organised.

We are making progress. In London, I have been working with independent businesses to develop the East End Trades Guild, a network of small and micro enterprises that builds relationships to grow their collective strength within their respective neighbourhoods. Our members are extraordinary in their ingenuity and endurance; James Ince & Sons Umbrellas is Britain’s longest established umbrella-makers and Gardner’s Bags is a fourth generation Market Sundriesman. And we have newer makers and designers like Tatty Devine, Michael Marriot and Ally Capellino. London is in large part recognisable thanks to small enterprises like these that make up its distinctive identity.  Imagine the capital without the kaleidoscopic diversity of small businesses from China Town to Brick Lane, Columbia Road to Portobello Road, and the myriad of markets from Walthamstow to Brixton. It would be a hollow place, with only its silent monuments distinguishing it from everywhere else.

Further east in London, the work of courageous leaders such as Jasmine Stone and Sam Middleton from Focus e15 has helped ensure that housing is the number one issue for the mayoral candidates. With less than three months until the next Mayor of London is elected, we have a narrow window of opportunity to add power to the momentum of resistance to displacement. Our fresh economy, enterprise and manufacturing perspective is vital.

Since the Summit, the brilliant Assemble have won the Turner Prize, illustrating an interesting shift in what is now valued in the arts: making community through addressing social need may have entered into new cultural territory. Excitingly, Assemble will be inspiring RSA Fellows and others at an Ideas Workshop on March 18th organized by the East End Trades Guild in collaboration with Future Cities Catapult, Just Space Economy & Planning and the RSA. Together with guest speakers including Mark Brearley from Cass Cities and Jessica Ferm from the Bartlett School we will begin to animate many of the values and ideas discussed at the Makers Summit. Through an exercise in collective intelligence we will begin to grow sustainable roots for spaces and places where local neighbourhoods and economies can continue to thrive in London. 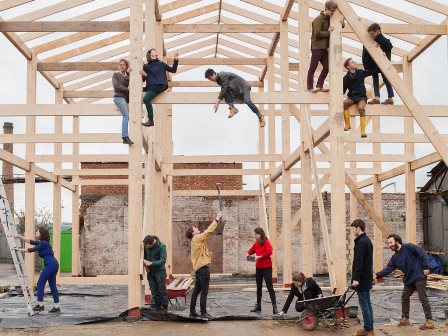 If you are an RSA Fellow and would like to be involved in this initiative please send an email outlining your interest and skill set. You might like to begin a similar conversation in your city.

The East End Trades Guild is currently recruiting new board members with the time, resources and expertise to build on the brilliant work that is already underway. If you think you can help then we would love to hear from you!