"The RSA Pupil Design Awards are centrally about the power of social design, but it is ultimately about helping pupils realise that they have the power look at the world and make things better. What better education to give to a pupil?"

- Rethinking the boundaries of design

At the beginning of the school year, we set students from five of our RSA Academies a challenge; to use their design skills to help solve real life problems. To do this, we gave them three briefs to choose from.

Tomorrow’s Classroom:  which called on students to design a future classroom that offers greater opportunities for the different ways in which people learn.

Making Peace: which asks for ideas around how design can help aid difficult and awkward conflicts with others.

(More detail on the three briefs can be found here)

Over the past two school terms, students have been working hard to connect with these briefs and have wowed us with some truly innovative and inspirational ideas. From a simple jigsaw to advanced coding and software, our distinguished judges (Betty Jackson RDI, CBE; Angus Montgomery, Editor of Design Week; Sevra Davis, Director of the RSA Student Design Awards and Kazz Morohashi, 2015 Student Design Awards winner and this year’s winner of the Howarth Awards) were very impressed by the calibre of ideas from the students.

Last week, over 40 shortlisted students were invited to Birmingham Open Media to pitch their projects to the judges before they had the very difficult task of choosing the final winners.

There were two categories to judge in total; category one (Year 8&9) and category two (Year 10&12). For each category, there were three prizes; two overall winners and a ‘Make it Happen!’ prize winner.[1] 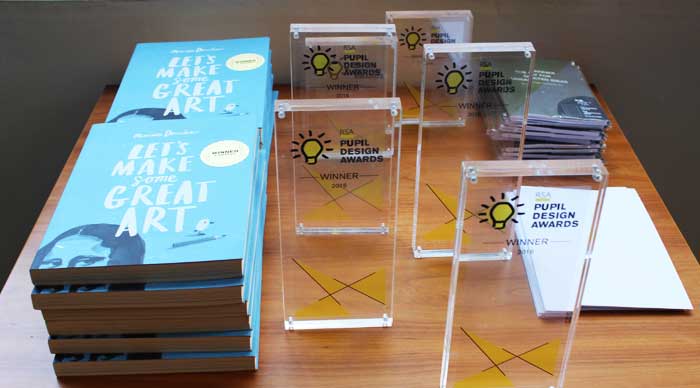 The final winners are as follows:

Tomorrow’s Classroom: Classroom lamps that adapt to suit the mood of the classroom

The judges were impressed by the fun approach to this idea. Whilst their presentation was appealing to look at, the judges were also impressed by the serious factors that underpinned the idea and the ways in which the students were thinking about how generic bright lighting can often feel overpowering in the classroom.

Inspired by their school’s ambition to obtain a Green Flag Award, Tom, Nathan and Luke were motivated by finding sustainable ways in which their school could reduce electricity. ‘Smart flooring’ would be located primarily in corridors and the lights would only be activated when someone walked on the sensors placed in the ground. Judges were impressed by the forward thinking of this group and also thought that this would be visually compelling.

The ‘Make it Happen!’ prize winner:

Tomorrow’s Classroom: A wrist device to help with classroom communication

This idea was primarily concerned with classroom communication. This group thought of a wrist device that students could use to alert a teacher if they were too uncomfortable to say they didn’t understand something in front of the class.

Judges were particularly interested in this group continuing to look at different communication styles that could be employed within their school, particularly for those not always confident or able to speak up in class.

Tomorrow’s Classroom: A portable chair to support posture for primary and disabled children

Tomorrow’s Classroom: The Electro Blazer – a blazer with different coloured LED lights in the collar which would alert the teacher if there was something in class a pupil didn’t understand.

Sense Metrics is a software that enables children with disabilities to continue with their learning at home. While disabled pupils may have the support and learning facilities they need in school, students often regress without similar support in the home. Sense Metrics is a programme that helps aid home communication and learning through the use of biometrics.

Judges were impressed to see that Shannon had done her own coding and had developed a fully functioning programme. She had taken the initiative to talk and consult with US academics about her project and was fully committed to further developing the programme. 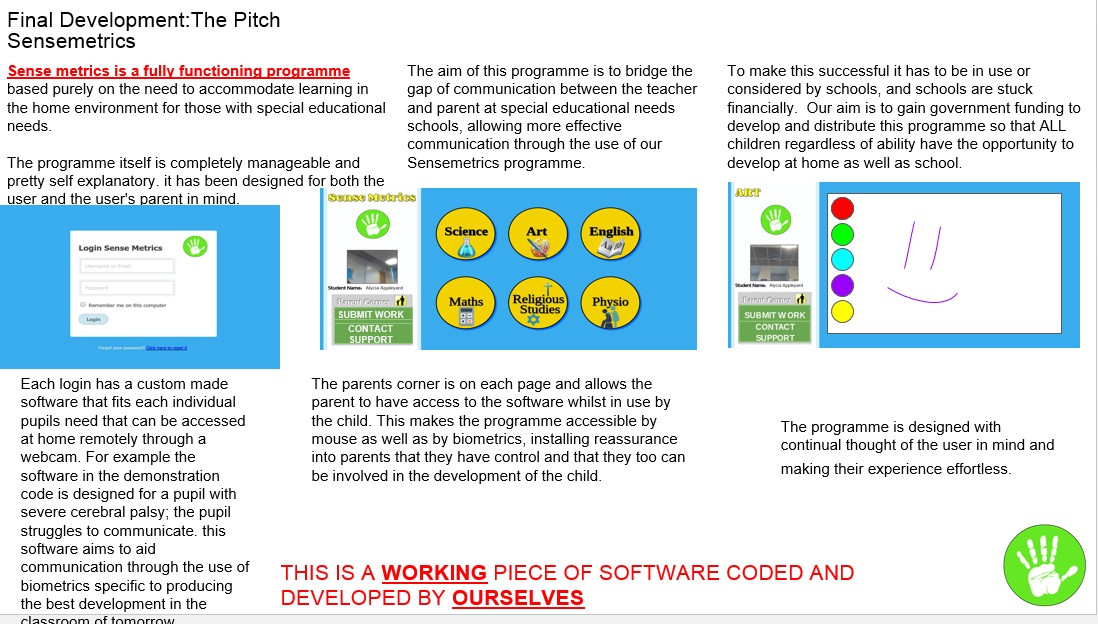 This entry was applauded for its effective simplicity. A puzzle designed for primary school children, Iqra, Raheema and Preety designed a jigsaw for arguing children to complete together- the idea being that the act of playing a game together would be a calming distraction to fighting children. The students also set the judges the challenge of completing the jigsaw during the students’ pitch which cleverly proved too much of a distraction for the judges to complete whilst listening to the students!

The ‘Make it Happen!’ prize:

Making Peace: An app for the school where people can post their feelings anonymously and have them answered.

Students would access the app through a monitored school log-in but could use a random username to keep their anonymity. A student could log on to this app and post thoughts, quotes feelings or situations that they were struggling with, whilst other people could then view this post and give advice or help to overcome the situation. This would be monitored by a school counsellor.

The judges were very moved by the courage and motivations of the two students and impressed by the way in which both Owen and Owen had considered ways in which the app could be monitored without sacrificing the anonymity of the user. The judges would particularly like to see the pair further develop their ideas which they felt had universal appeal.

Tomorrow’s Classroom: The Smart Chair – to address storage and comfort of the student in class

Tomorrow’s Classroom: G-Kestra- a device to allow motivational music to be played in the classroom under the control of the teacher

Tomorrow’s Classroom: RSA App - for shared learning and communication across the RSA Academies

Well done to all students from Ipsley CE RSA Academy, Arrow Vale RSA Academy, Holyhead School, RSA Academy in Tipton and Whitley Academy who entered this year’s RSA Pupil Design Awards. We are very proud and inspired by what you have achieved!

With special thanks to Robin Levien RDI and Michael Wolff RDI for their generous gift donations.

[1] The ‘Make it Happen!’ prize was awarded to the entries where the judges felt like a student’s idea (or element of the idea) could be scaled and further developed with the support of the RSA and their school. The winning students will continue to work on their project and become lead designers in making it happen.