Who Pays for Art?

If you’ve not read The Royal Society of Arts 1754 – 1954 by Hudson & Luckhurst, I would recommend it. Well certainly at least the first half. Admittedly the latter sections do read a little like the world’s worthiest shopping list as it gets into the 20th century. As a bit of an Enlightenment enthusiast I found it a compelling compendium of some of the most inspiring people and ideas, many of which are still shaping the country today.

Some of my favourite tales include Mr Smart’s ‘Scandiscope’ machine, which is still in production today (indeed even I own one!), the (possibly dubious) arrival of the humble swede on these shores and William Shipley’s ground breaking social investment, crowd funding, fuel poverty project back in Northampton in 1754. Another one that caught my interest was the story of Joshua Reynolds, the RSA and the Royal Academy.

We understand the positive impact that heritage can have on an area’s social, cultural and economic development - something highlighted in last year’s Heritage Index. Back in February this year in Plymouth, Joshua Reynolds provided a tangible example of how we can use our own heritage to further realise these outcomes. 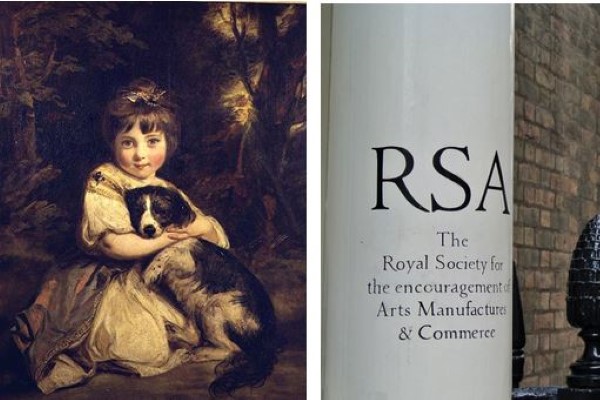 Reynolds is often referred to as ‘Britain’s greatest portrait painter’ and the backstory goes something like this. Reynolds was born in Plympton St Maurice, Plymouth in 1723. He developed his trade painting the navy’s top brass in the Devonport dock area of the city. Following some time in Italy he moved to London where he, along with other prominent artists of the day such as Gainsborough, Hogarth et al, became leading members of the RSA.  In 1760 Reynolds, with the other artists, staged the first exhibition of combined British artists in the UK at the RSA’s House.  The RSA, in line with its philanthropic mission insisted the event was free to enter for the public.

The exhibition was a sensational success, so when it came to discussing a follow up event the artists insisted on the need to charge a modest entrance fee to provide for the ongoing future of the annual exhibition, and of course the wider question of artists’ incomes. The RSA was insistent on the free-to-enter nature of the event and subsequently, the artists set out to go it alone, which lead, in part, to the establishment of the Royal Academy. The exhibition still runs to this day as the Academy’s annual summer show.

At the heart of the debate that arises here is the question of the value of art and who pays for art. A debate that has never been as current as it is in the UK today.

Moving forward some 250 years, in 2015, with the support of the Heritage Lottery Fund and others, Plymouth City Museum and Art Gallery purchased an original Reynolds self-portrait and sketch book and had funding to support an additional portraits project with Devonport Schools. As my ‘day job’ is looking after much of the regeneration work in Devonport at the Real Ideas Organisations (RIO) this naturally brought the museum to my door, I posed the question: “Did you know that Joshua Reynolds was leading member of the RSA?”

From here ensued a partnership project, where unusually the challenge wasn’t funding but how to cat-heard an almost endless list of project partners and contributors into one sufficiently shared direction.

Detailing all aspects of the project would go way beyond the scales of a blog, but some of the key aspects are as follows.

The question of who pays for art, and the wider value of creativity within society, is of concern to many, including colleagues at the RSA, cousins at the RA, the Arts Council and subsequently my team here at RIO – being the Arts Council’s Bridge Organisation in the southwest.  This created the opportunity for additional funding for the support of a two part event: an awards ceremony for participating young people, an exhibition and the unveiling of the new Reynold Blue Plaque and; an evening debate event on the question of ‘Who pays for Art’. 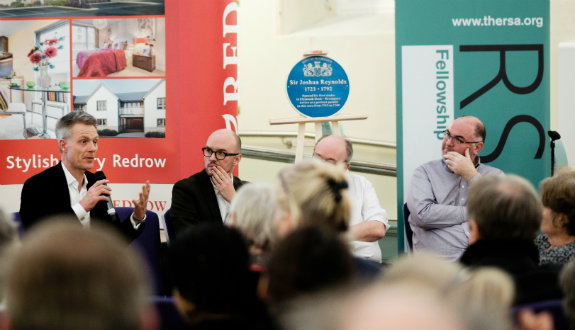 While Reynolds’ original studio has been lost for some time, the site is now the focus of a housing development by Redrow Homes. Pointing out that their sales office now stands on the site of the first studio of the nation’s greatest portrait painter allowed for a fairly easy step into sponsorship conversation. In addition to providing further support for the event this created four of our newest Fellows; Elena Brake, Sarah Gregory, Paige Barnard and Ben Ayling, fine arts students from Plymouth College of Art and Plymouth University (via Tim Bolton FRSA and Sarah Bennet FRSA respectively) who became our first four students to win ‘Redrow Joshua Reynold Fellowships’, funded for the next two years. 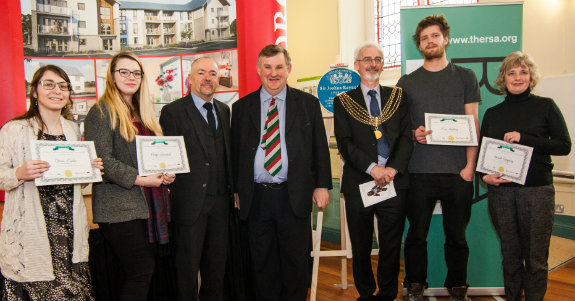 The scope and the scale of the project has been far more sprawling, suffice to say the events were fantastically successful attracting over 300 people, created three major news print articles, including regional press and levered a total of £12,700 cash funding  for a local RSA South West network spend of £300.

A small bit of knowledge of our own collective past can lead to much bigger social, cultural and economic outcomes for our own local communities today.

In true Hudson and Luckhurt, the only way to end is with a very worthy shopping list, of all the active contributors: