How I came to co-found a makerspace in Ghana

It was late in the evening when Jorge took me to see the space that Creativity Group (CG) worked from in Kumasi, Ghana’s second city. The homemade RFID door entry system gave a clue to the passionate geekery within.

Find out more about RSA Global

Inside, in a space barely bigger than a cupboard, two students were hunched over their projects – one designing a science ‘lab-in-a-box’ set that could be used in schools, the other working on the next generation of the entry system. They had to finish their coursework before they could come, but CG offered an opportunity their engineering degrees didn’t: the chance to put into practice the theory from their textbooks, to actually make things. 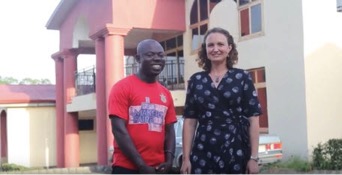 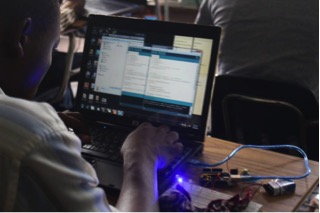 In a previous RSA blog post “Makers: A new hope for the circular economy?” I described why I think maker skills are an essential component in helping us move to a more sustainable society. The maker mindset – which to me, is ‘Don’t be a passive consumer. If you don’t like how things are, change them. If you don’t know how to do it, learn’ – is also a vital tool in international development.

Jorge founded CG (six years ago, at the age of just 20) to help his fellow students gain hands-on experience while developing ideas that could benefit the community. I had heard about CG because of some projects they worked on at an electronic waste recycling scrapyard: building a drone that was used for data gathering to support informal settlers land-use claims, and a bicycle-powered cable-stripping machine as a safer way to recycle the copper in cables. I asked to see these and various other clever projects I knew they had made, but the answer was always the same. We don’t have it any more. We took it apart. Or, in the case of the drone – here is the chassis, but we took the motors and the electronics off, so it doesn’t work.

I began to realise the answer to a question that had been troubling me – if these guys are so clever and inventive, then why aren’t they setting up businesses to make these things? CG has been extremely successful at getting young Ghanaians interested in inventing things. But resources are few, and each team has to wait their turn to get parts to prototype their idea. Once it is working, it is time to strip it down and hand the parts on to the next waiting team, of which there are many. The door entry system had only escaped because it was being used to protect the rest of the precious equipment. 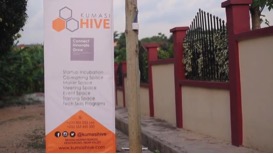 In that first meeting, Jorge and I discovered our shared passion for giving inventive people access to the tools, knowledge, and resources to build their own solutions to the challenges they see around them. We decided then to work together on the next step – creating the conditions that will allow these innovators to turn their inventions into sustainable businesses, creating impact for society, the environment, and the local economy. We created Kumasi Hive.

Kumasi Hive opened in January, and it is already starting to become exactly what I hoped it would be – a hive of activity, with some brilliant ideas, lots of hard work to turn those ideas into something real, plenty of peer-to-peer learning. This is a long game – developing hardware products doesn’t happen overnight – but with modern equipment the makerspace allows people to make prototypes in days that previously would have taken them months. So the development cycle is speeding up. The science set that I saw an early prototype of on my first visit is now a product in the market, selling so well that production can’t keep up. We’ve had our first successes in attracting some funding to the startups we work with.

With the RSA’s support, we are now crowdfunding for additional equipment for the makerspace, and to increase the number of startups we support. If we reach our target we will hold an open competition, and backers will have the opportunity to vote for which of the shortlisted entries will get funding to prototype their idea.

Do check out our campaign page - the video shows more of what we’re doing and some of the entrepreneurs we’re working with. Please support us if you can!