Many argue that austerity, rising demand for public services and the growing complexity of social problems, such as persistent inequality and chronic ill health, presents a “perfect storm” for recasting the relationship between citizens and the state – one that is built on a more equal partnership and a recognition of the assets of citizens. Political connectivity should be key to this.

In a report published today for the Staff College, we suggest that our current social settlement needs rethinking and should be different from the one we have today. The service-centric model, which assumes that needs can be met and challenges can be resolved simply through the efficient delivery of professionally managed services, is untenable.

We know that top-down, “new public management” approaches have reduced local authorities to being corporate hubs of service delivery, and citizens to being consumers or passive recipients of state support. This is not simply an abstract critique: the fragmentation and inflexibility of public services has human consequences. For many of the most disadvantaged, it often means being tossed around a cold, confusing and disempowering web of public support. For those providing services, cultures of rigid management, accountability and risk have fuelled a disconnect between their workforce and the communities they are set up to serve.

Our research suggests that austerity has heightened these issues. Paradoxically, diminished budgets have compelled public service leaders to try to be more innovative while undermining their capacity to do so in practice. The leaders we interviewed cautioned that efficiency savings have been exhausted and a period of significant contraction and ‘retrenchment’ is now underway. For critics, if the relationship between the citizen and state has changed, it hasn’t necessarily been for the better. Reforms since 2010 have accelerated the trend towards shifting risk from the central state to local authorities and to individuals and communities themselves. ‘Responsible citizens’ are increasingly expected to compensate for state withdrawal. Some have described this as an emerging ‘do-it-yourself’ model of self-governance.

Our review has nevertheless uncovered many national and international examples of the state and citizens working together differently to achieve better outcomes, including in times of austerity. At the heart of these initiatives has been an ethos of co-production, partnership and valued citizen input. The report outlines a spectrum of approaches (see diagram below) ranging from state-led initiatives (such as ‘nudging’ citizens towards more pro-social behaviours) through to putting citizens in the driving seat of shaping services and budgets.

One case study we feature is the West London Zone (WLZ), modelled on the successful Harlem Children’s Zone. WLZ is bringing together the resources of the social sector and local communities to achieve collective impact in improving outcomes for children and young people. The initiative provides a ‘cradle to adulthood’ pipeline of tailored and co-produced support, helping children most at need at different stages of their life. A link worker ensures that service users access the support they need in a joined up and coordinated way. A central part of the social sector-led programme involves working through the community’s existing groups to build community capacity and spread support for constructive social norms: strengthening a sense of ‘community’ in often fractured places. WLZ blends the resources and services of the public, private and social sectors, and points to an emerging role for the state as a partner and collaborator, rather than sole driver, of positive change. 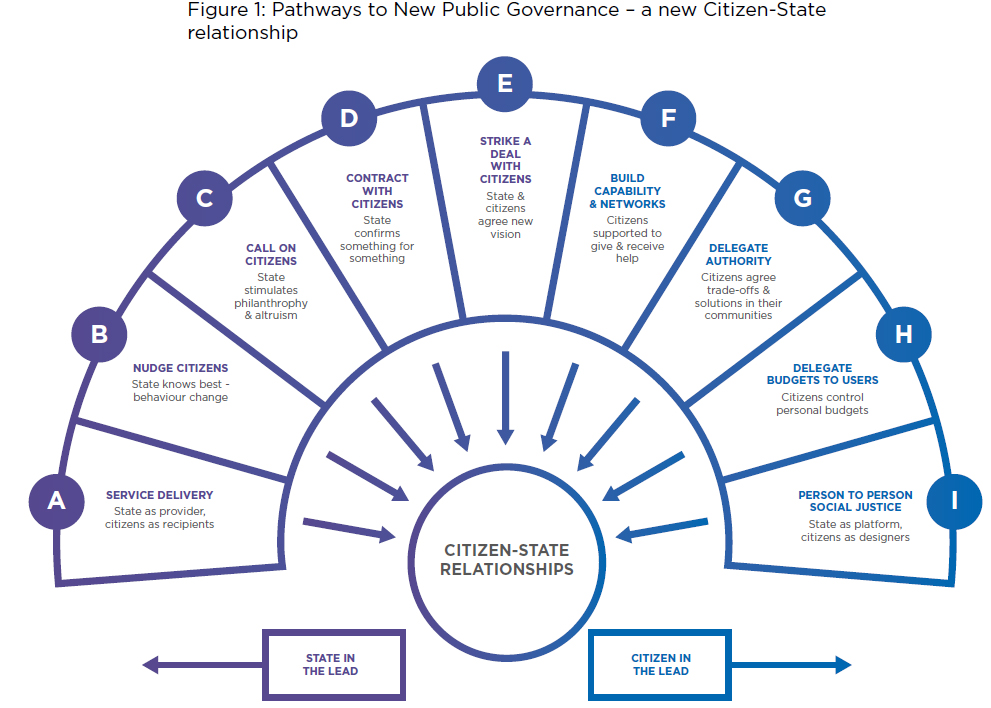 Despite the value of these models, one of the findings of our research is that they continue to remain at the margins rather than at the mainstream of practice. There are many reasons for this. Part of the answer lies in a lack of an evidence base coupled with concerns about cost and value for money. But more fundamentally it has something to do with the historic role, wiring and culture of public services. Local government in the UK has been very effective as a corporate manager of service delivery, but this central focus has prevented more energetic forms of local place-based leadership and citizen involvement from emerging. Participatory initiatives have tended to be either tokenistic or top-down, based on a deficit understanding of citizen capabilities and focused on service delivery rather than citizen empowerment.

In other words, there is a democratic deficit at the heart of our public policy. When this is combined with a growing sense of economic insecurity and feelings of helplessness and loss of control, society’s social contract becomes strained. Brexit has shown that a failure to give a genuine stake to marginalised communities can have serious ramifications. This is why the RSA’s work on inclusive growth and citizen-led economic decision making is so important.

The Public Services and Communities (PSC) team at the RSA proposes connectivity – social, economic and political – as a means for empowering citizens and communities to meet their needs and aspirations. Political connectivity is key for addressing the democratic deficit and providing a more positive basis for the citizen-state relationship to develop. As Charlotte Alldritt argues, “the current yearning for a new kind of politics is symptomatic of a chronic lack of connectivity at a local and national level,” seen for example in the fragmentation of government policies and the highly technocratic nature of major reforms such as devolution. New forms of citizen-based governance must be pursued to address this. Our report provides some models of practice, but there is plenty of work left to do.

Read the report Changing the narrative