The human face of the refugee crisis

Hannah Rose Thomas FRSA is an Artist and One Young World Ambassador. Over the last three years she has volunteered in Calais and Jordan Refugee Camps, organising art projects for refugees and coming face to face with the human reality of the refugee crisis.

There is very little about the refugee crisis that is easy to comprehend. The statistics are inconceivable; across the globe, more than 65 million people have been forced to flee their homes. That’s roughly equivalent to the UK’s entire population seeking refuge from war, violence, and persecution.

The images of overcrowded boats on the Mediterranean have become such a familiar part of our weekly news cycle that they have lost all sense of the urgency and despair they represent. Interminable reports of conflict in Syria, Iraq, and Afghanistan appear so remote it can seem as though they are taking place in a separate dimension. As a result, amidst a slew of statistics and a tense political climate, the stories and identities of the individuals involved have been lost altogether.

During global challenges of this magnitude, it is easy to lose sight of the lives affected, on an understandable, human level. It’s easy to view these people solely as refugees, as men, women and children for whom life has forever been hopeless. Yet for all the trauma of their current status, these are lives just like yours and mine, defined by the same human experiences and hopes including parenthood, marriage, career, and education.

In December, while volunteering in the Calais ‘Jungle’, I met Syrian Abdul-Rahman. Abdul is 15 years old; three years ago, he was at school, living at home with his family in Syria. Tragically, Abdul lost his whole family in an airstrike. He made the dangerous journey to Calais alone, hoping to be reunited with his only living relative in the UK. 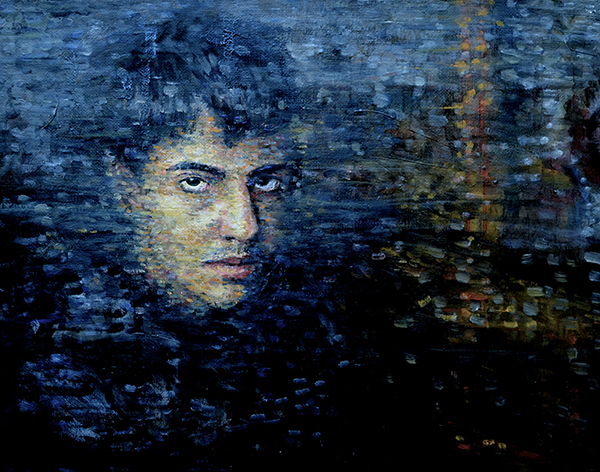 This April I met this brother and sister in Za’atari refugee camp in Jordan, now home to 80,000 Syrian refugees. During one of the art projects I organised, they painted their experience of the war – the images they painted of tanks, soldiers, dead bodies, and destroyed homes were only a small glimpse into the trauma they’d experienced. 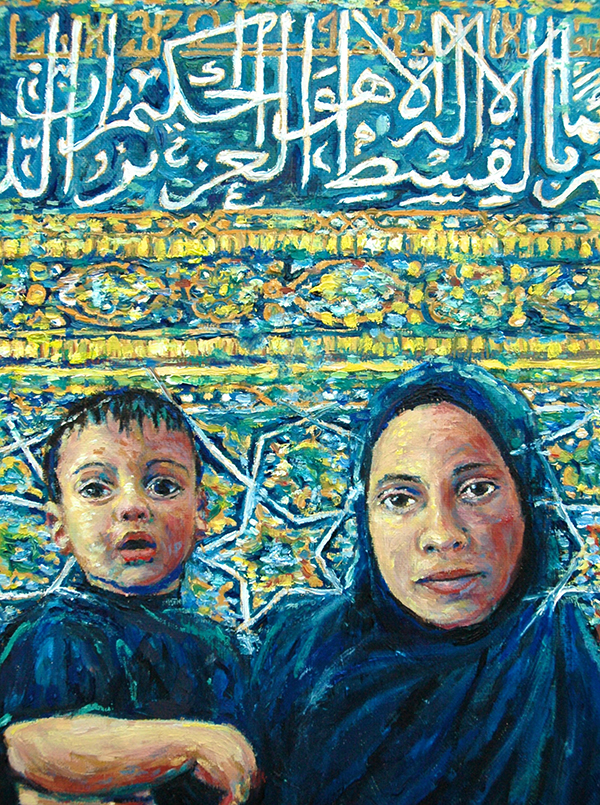 Whilst it might seem natural that these individual stories get lost when we are confronted with catastrophes on this scale, it is a consequence we should resist as fervently as possible. It is this that motivated me to paint portraits of the people I have had the privilege of meeting in refugee camps across Jordan and Calais, in an effort to humanise the individuals involved in this global crisis.

History has shown that it is when we come face to face with the people affected by the wars and conflicts which had once seemed so remote, that seeds of progress can be planted. For example, AP reporter Nick Ut’s Pulitzer Prize-winning photograph, “The Terror of War”, is an image widely credited with swaying public opinion against the Vietnam War, hastening the end of the war some six months later. Ut’s photo, which depicts a nine-year old girl running naked towards the camera, away from a napalm attack on her village, ran on the front page of newspapers and magazines across the world. His image was a violent and conclusive symbol to the global community that this war was no longer an act of liberation. Instead, it acted as a brutal reminder of the individual, daily agony being inflicted on the northern Vietnamese population.

Similarly, Jeff Widener’s image of the Tiananmen Square ‘Tank Man’, became a vital symbol of what the demonstrations and uprisings really meant for the Chinese people. It was a simple image of the defiance of one individual against the gargantuan power of an authoritarian regime. Those two images represent moments in history that helped turn the tide of public opinion and understanding by putting us in brutal contact with the human lives at the heart of sprawling, inconceivable crises.

More recently, the infamous image of Aylan Kurdi on a beach in Turkey had a genuinely transformative, if temporary impact on public understanding and compassion for the human tragedies that the refugee crisis has caused. According to research by the University of Sheffield, in just 12 hours, the image appeared on 20 million screens around the world. Crucially, if only fleetingly, the use of the word ‘refugee’ temporarily outstripped the word ‘migrant’ on social media. Despite the many hundreds of lives lost in the Mediterranean that summer, this individual story has endured, generating hours of broadcast media and filling column inches.

Surely, the first challenge we face in tackling this crisis is to recognise the common humanity we share with the people fleeing their homes across the world. The sprawling slums of the Calais Jungle are populated by people who, just a few years and even months ago, worked as teachers, doctors, shop owners; many were children still at school. Today, they are living in temporary shelters in fear of tear-gas attacks, made victims to the demonisation of the European press.

There is no simple solution to a challenge of such geographical, political, economic, and religious complexity. However, the first step is to recognise and to come face-to-face with some of the individual people suffering from the fallout of war.