Is FinTech just for the rich?

A significant proportion of low income households lack access to basic financial products. The recent rise in money management apps suggests that FinTech will boost consumer financial capability. Will FinTech do anything to address financial exclusion?

You might assume that in one of the world’s richest economies with one of the most sophisticated financial industries, everyone would have access to basic banking services. If you did assume this, you’d be wrong. 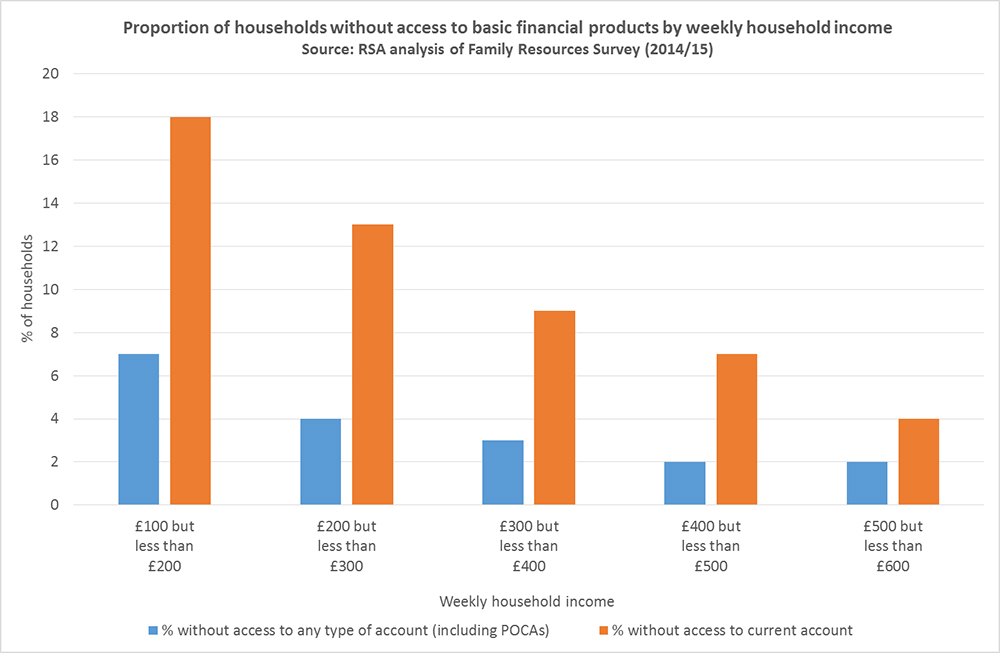 Elsewhere, The Financial Inclusion Commission estimate that nearly 2 million adults in the UK don’t have bank accounts. These people are also likely to be excluded from other financial services such as borrowing and insurance.

Why does this matter?

How the poor pay more

With so many of the best tariffs for utilities and other services only available for direct debit customers, and with many of the best shopping deals available online, financial exclusion results in the ‘poverty premium’ - the extra cost associated with using cash-based, prepaid top-up phone and energy services.

While many low income households have access to more basic bank accounts, these tend to offer such low functionality that they do not help people avoid this poverty premium. Post Office Card Accounts (POCAs), for example, enable pensioners and welfare recipients to receive benefit payments but cannot be used to obtain cash from ATMs (outside the post office) or pay bills (either directly or by direct debit).

Even more fundamentally, the lack of a bank account means that many low income households do not have the tools at their disposal to effectively manage their money. This can lead to poor financial decisions and increased debt. The adverse effects of this on mental health and family stability are well documented.

Many existing financial technology (FinTech) applications have an explicit focus on building financial capability by helping consumers better manage their money. Monzo (formally known as Mondo) is a prime example. This mobile banking app (and prepaid debit card) analyses users spending in real-time then enables them to see how much they spend on travel, groceries, bills and entertainment each month.

Pariti is another case in point. This app gives users an overview of all their bank and credit card accounts (including direct debits and standing orders) and after they input their anticipated expenses, along with any money they want to save, it uses an algorithm to predict whether (and by how much) they will overspend each month.

Even incumbent financial institutions have started developing rival applications. Santander’s SmartBank app will use artificial intelligence akin to the IPhone’s Siri to enable people to ask their smartphone questions such as “how much did I spend last week?” or “how much have I spent at [insert major coffee chain] this month?”

Some of these applications have the potential to help people on low incomes. Besides offering ‘cash-like’ control over your spending, Monzo taps into elements of the age old ‘jam jar’ approach to budgeting, where income is set aside in different pots at the beginning of each month. This approach is supported by a wealth of evidence from behavioural science. Mental accounting is the idea that we operate in discrete mental accounts. Once we allocate our money for one thing, we don’t like to spend it on something else. Designing applications with this in mind could help prevent overspending.

But will low-income customers also feel these benefits?

It remains to be seen whether any of these innovations will actually be adopted by low income consumers. Historically, the underbanked have been perceived as a segment of the market that is not very profitable. Initial signs suggest that FinTech firms are targeting incumbents’ most valuable customers, not the least. The EY FinTech adoption index highlights that younger, higher income consumers in developed urban areas such as London are the biggest users of these applications. Some money management apps are marketed specifically at students or the parents of young people. Loot and Osper are respective examples. Pariti is most useful if you already use multiple financial products.

FinTech also has the potential to exacerbate, rather than ease, financial exclusion. Over 600 bank branches closed last year. If closures continue at this rate, and FinTech (in particular online banking) is partly to blame, then the people that depend on physical infrastructure because they lack digital skills and connectivity may soon join the ‘underbanked’. However, the industry is taking steps to mitigate this risk, with Barclays IPad technology enabling community bankers to set up a virtual branch in locations such as nursing homes and community centres.

Apps developed specifically for this market show the most promise

While all this might make it seem as if FinTech will do little to address financial exclusion, there are some more promising applications on the horizon. Squirrel is designed for low income households (employees earning less than £25,000). This app diverts their wages into a special account that they don’t have immediate access to and helps prevent overspending by releasing small amounts of money at timely points each month, with larger amounts released when big bills are due. It also helps people save by holding back a monthly amount contributed to established targets. Part of the promise of this app is that it is marketed specifically at employers, on the basis that it will increase productivity, reduce absenteeism and improve wellbeing. This rationale is aided by behavioural insights as financial worry (or perceived scarcity of resources) has been shown to consume our cognitive resources. This reduction in “bandwidth” reduces intelligence (by about 14 IQ points).

Another good example is Monese. A frequently cited barrier to financial inclusion is lack of appropriate identity documentation. Many people without a bank account will also not have the letters from official authorities required to open one. Monese is a mobile only current account designed for migrant workers who will need a UK account before they can start employment. It enables people to open this account in minutes, without a UK address or credit history, using their passport or driving licence as ID. The app also offers spending analytics similar to Monzo. The costs are transparent. There is an upfront fee (£4.95 per month) but this is offset by better deals on international money transfers. Monese is reportedly five times cheaper than a conventional current account for people who send money home to their family abroad.

So, will Fintech help the poorest?

One promising aspect of FinTech innovations is the greater control it can give consumers over their finances. This includes those on the lowest incomes, who have never before had a financial service offered to them that can beat the sheer immediacy and transparency of cash in your pocket.

However, the government and industry should keep a very watchful eye on the potential to open up a new financial divide – this time between the digital have and have-nots.

The RSA is working in tandem with Grant Thornton’s Vibrant Economy programme to explore the economic and social impact of new fintech innovations.

Find out more about the our Big Bang 2 project