Earlier this week The Times newspaper published a letter, signed by representatives of 60 organisations committed to expanding the life chances disadvantaged children, making clear their opposition to the government’s plan to overturn the ban on new grammar schools. I was more than happy to add my name, and that of the RSA, to the letter. This is why.

As others have not only claimed but proven, grammar schools simply don’t do what their supporters claim they do – act as an engine of social mobility, allowing bright but poor kids to reach their full potential, boosting England’s educational performance in the process. That is because, as the BBC’s Chris Cook has demonstrated, grammar schools simply don’t teach very many bright but poor kids, having long since been colonised by the sharp-elbowed middle classes. As the table below shows, in Kent and Medway (a selective education authority) a young person living in the poorest neighbourhood in county has a less than 10 per cent chance of attending a grammar school, while someone living in the wealthiest neighbourhood has a more than 50 per cent chance of doing so. Why? Because not only has 60 per cent of the attainment gap between rich and poor pupils already opened up by the age of 11 when the entrance exam is taken (making it far less likely that poor kids will pass it), but the system is further skewed in favour of the rich by the fact that the entrance exam – notionally a test of intelligence rather than knowledge – can be gamed, so long as you can afford the private tuition designed and explicitly marketed for that purpose. 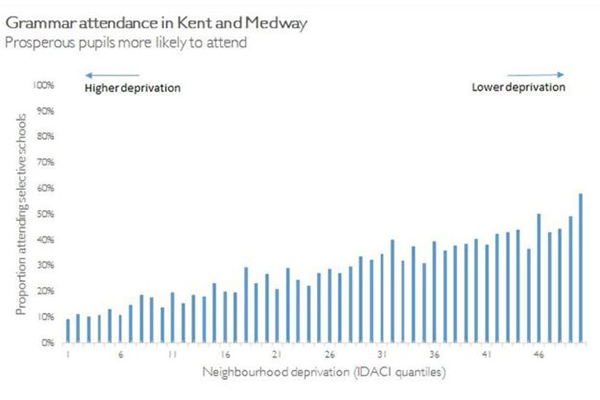 Kent and Medway is much discussed because the county hosts such a large number of grammar schools. But have opponents of selection seized on it because it supports their case in a way that a broader, country-wide analysis might not? No. Across England, 13.2 per cent of secondary school pupils are poor enough to be eligible for free school meals (FSM), compared to just 2.5 per cent of grammar school pupils. This cannot be explained solely by the fact that FSM pupils are, on average, well behind non-FSM pupils by the time the 11+ exam has to be sat. As the Education Policy Institute has shown, 6 per cent of high attaining pupils at the end of primary school (the highest attaining 25 per cent) are eligible for free school meals, yet the number of FSM pupils in selective schools is less than half this – a gap that gives some indication of the size of the ‘tutor effect’, among other factors. Nor can the social exclusivity of grammar schools be explained away by some quirk of geography – the possibility, however remote, that bright but poor pupils live too far away from these schools to attend them. Pupils eligible for free school meals make up 6.9 per cent of the high-attaining group living within travelling distance of a selective school – higher than the proportion of high attaining kids who are eligible for free meals across the country as a whole. As wealthier children travel significant distances (twice as far on average) to attend grammars, bright but poor local children remain shut out.

The consequence, unsurprisingly, is greater inequality, with grammar schools almost guaranteeing high attainment for the relatively wealthy minority who attend them (97 per cent of grammar school pupils achieve 5 A*-C GCSEs including English and maths), while damaging the performance of the poorer majority who do not.  If we return to Kent and Medway, we can see that all but the very least deprived pupils do worse than elsewhere in England, resulting in a lower aggregate performance for the county as a whole. 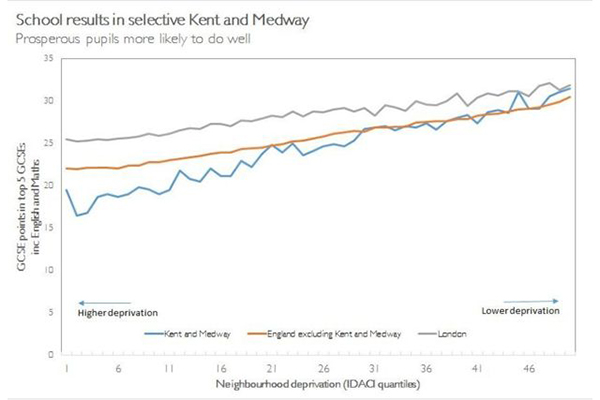 But the most interesting comparison – and the one that most frustrates those who have been working so hard over recent years to drive up the quality of comprehensive education – is with London, where performance in non-selective schools has rocketed to such a degree that people are now flying in to the capital from around the world to find out how it was achieved.

The fact that the grey line never drops below the blue line, and that it rises more gently, tells us that it is possible to build a non-selective education system that raises standards for all; a more equal system which benefits the poor while doing no worse for the rich.

Which brings us back to the Educational Policy Institute’s key finding: that in terms of the progress that pupils make while at school, high quality non-selective schools (the top 25 per cent by value added) are outperforming grammar schools, doing so at scale (there are five times more high quality non-selective schools as there are grammars) and doing it for everyone (12.6 per cent of their pupils are eligible for free school meals versus 13.2 per cent nationally and 2.5 per cent in grammars).

Little surprise then that researchers at the London School of Economics found that the early academy schools that powered so much of the increase in London’s educational outcomes over the last decade and a half, are the real engines of social mobility, educating 50,000 FSM-eligible pupils compared to the 4,000 in grammars, adding real value (a full grade per pupil across five GCSEs) and transforming life chances (increasing the number of pupils going on to university by a third).

The real point here is not that grammar schools aren’t good schools. Or indeed that we should disapprove of a parent’s decision to send their children to a grammar school. On the contrary, a parent’s first responsibility is to do the best they can by their own children and a grammar education is as close to a guarantee of success as can be found in the state sector.

Rather, it is that this is a classic case of the private and public interest colliding. From a system perspective (which is, of course, the Prime Minister’s first responsibility), the evidence is clear: grammar schools do more harm than good. Researchers have found no evidence of any positive impact on attainment by grammars that isn’t explained by the relative wealth and high prior attainment of their pupils. But they have found plenty of evidence of them doing very real damage to the performance and prospects of non-grammar school pupils in the area where they are located. That’s a lot of losers for a small number of winners whose needs would be met just as well by the best comprehensive schools.

That is why the coalition of organisations to which I added the RSA’s name is so wide – spanning the political spectrum and encompassing academics and teachers, charities and professional bodies. There is much about education policy that will continue to divide us. But on the importance of not returning to a system that pushes children down two different life-altering paths at the age of 11, we all agree: that is not how you build “a country that works for everyone”.