The self-employed: rich, poor or something more?

Two studies released yesterday show that the earnings of self-employed workers are in freefall. So have the self-employed become just one more legion in the UK’s growing army of precariat workers? Or is there more to the story than meets the eye? Here we take a look behind the headline numbers.

Today’s Earnings Outlook from the Resolution Foundation comes with a startling finding. According to their analysis of the Family Resources Survey, typical earnings among self-employed workers were lower in real terms in 2014-15 than in 1994-5, equating to two lost decades of income growth. Self-employed pay packets shrank by 15 percent over the last twenty years, whereas those of employees grew by 14 percent.

The Social Market Foundation’s latest report mirrors the RF’s analysis, revealing that nearly half of the self-employed are now paid below the national living wage of £7.20 an hour, compared with a fifth of employees. The authors note that 19 percent of self-employed households are claiming in-work benefits, and that many are likely to be adversely affected by the introduction of Universal Credit with its stricter eligibility requirements.

The overall picture presented by both studies is one of a growing band of reluctant workers struggling to make ends meet, with only a threadbare safety net to support them should they fall sick or cease trading. Going it alone must surely mean going broke.

Regular readers of RSA blogs will know that we have also cautioned against the insecurity inherent to self-employment, as well as the risks associated with new forms of gig economy work powered by platforms like Uber and Deliveroo. Yet there are several reasons why these studies may have overstated the difficulties facing this 4.8 million-strong workforce:

Averages hide a multitude of sins – One reason why overall self-employed earnings have fallen significantly in recent years is because of an influx of part-time workers earning less than their full-time counterparts. While full-time self-employment has grown by 30 percent since 2000, the number of people working fewer than 30 hours a week has grown by 80 percent. We’ve also seen a big jump in the number of over 65s in self-employment, which has likewise put downward pressure on the total average earnings figure. 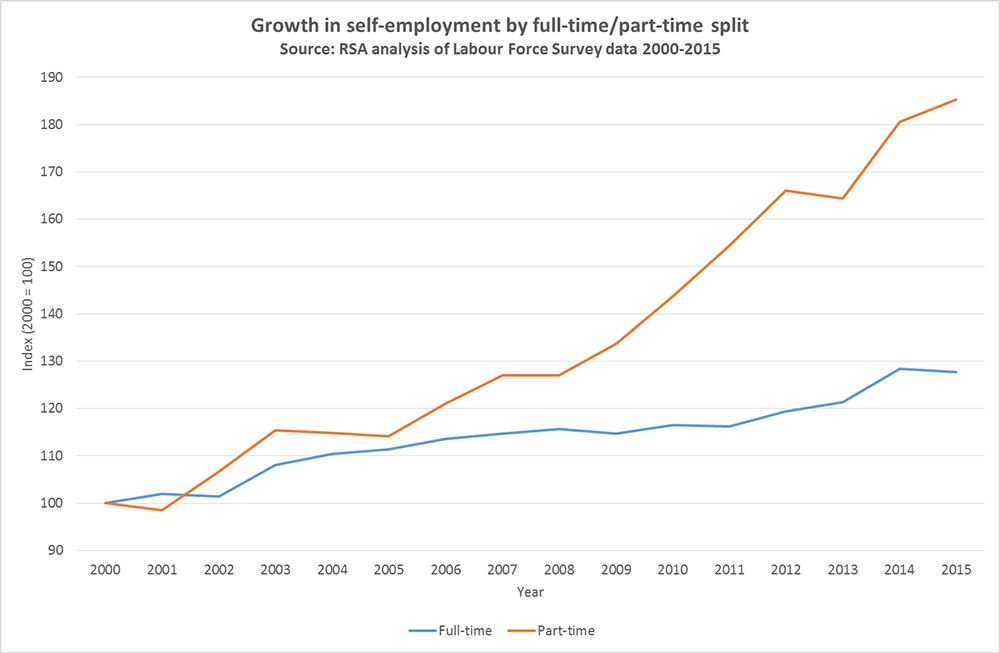 Wealth needs to be considered alongside income – Financial wellbeing is determined not just by how much money people take home in earnings but also by how much they own in terms of assets – and the self-employed are no exception. Previous analysis by the RSA shows that households with only self-employed workers are more likely than employee-only households to own their home outright and to have a higher level of savings stowed away. Home ownership means lower or nil housing costs, while savings provide a financial cushion in times of need. 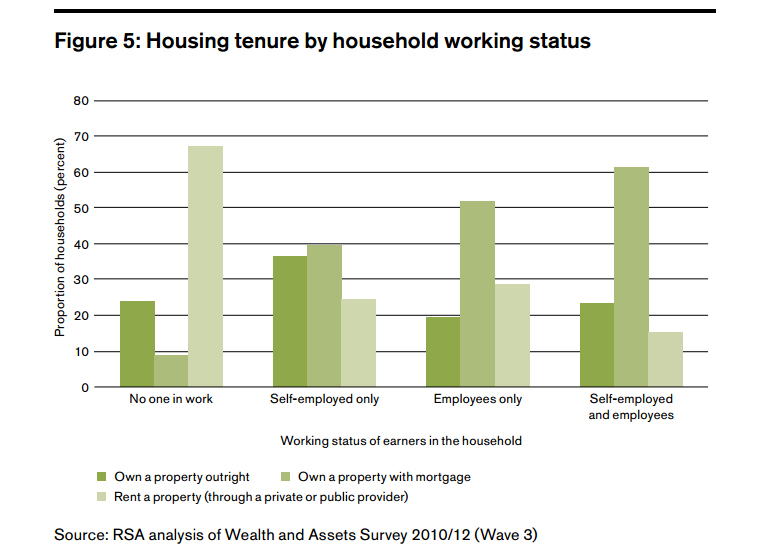 Earnings tend to grow overtime – The self-employed workforce is characterised by a ‘revolving door’ phenomenon, whereby streams of people enter and leave business within a short period, earning very little in the process. Yet those who remain in self-employment for the long haul often see their income grow as they find their footing. Our analysis of the Understanding Society Survey reveals that people who have worked for themselves for 3+ years earn nearly four times as much on average as those who have worked for themselves for less than a year. This highlights the importance of taking a longitudinal perspective on earning patterns.

Subjective income satisfaction is high – The problem of relying solely on objective earnings data to determine people’s financial status is that it fails to capture hidden preferences, goals and lifestyles. Some may be content with a low income if their outgoings are similarly low (think of older workers with twilight mortgages), while others may have made a conscious decision to forgo a stressful well-paid job for a meaningful but less lucrative life answering to themselves. When asked directly about their financial circumstances, the self-employed are nearly just as likely as employees to say they are satisfied with their income. 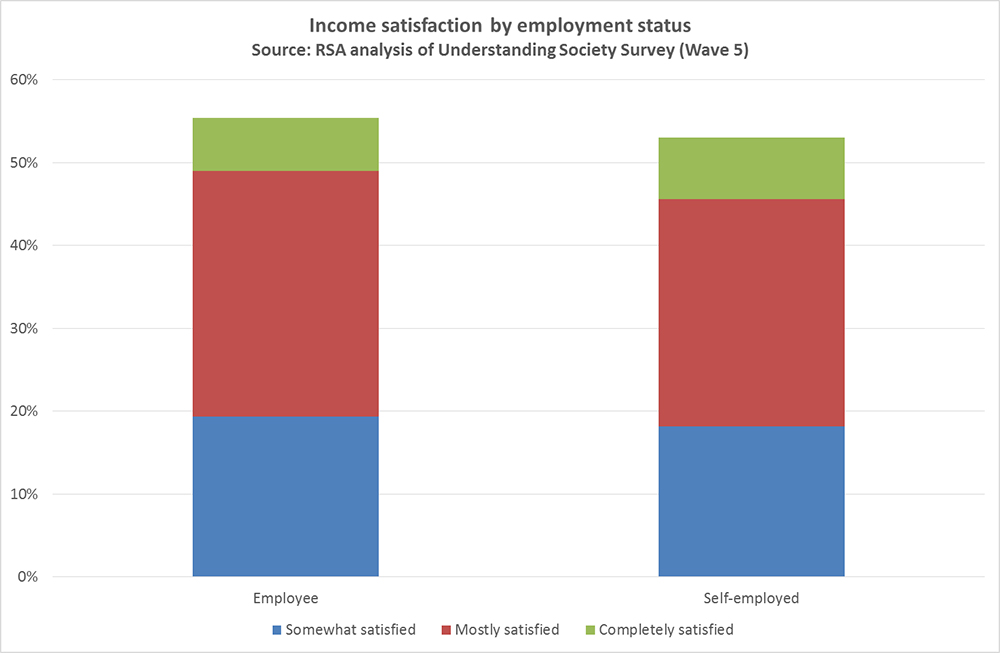 None of this is to dismiss the financial obstacles facing people who choose to strike out alone. Many clearly struggle to make a living – a problem exacerbated by the absence of conventional safeguards, such as sick pay, maternity/paternity pay and employer pension contributions. But overstating the perils and pitfalls of self-employment risks tarnishing it as a form of work altogether, and distracts us from the real task of creating a proper tax, regulatory and welfare regime that runs with the grain of self-employed lifestyles.

As the RSA has stated elsewhere, our goal should not be to try and ‘save’ people from self-employment, but rather to help more people take part in the meaningful kind that at its best allows workers to flourish and find purpose.

The RSA is working with Crunch, the online accountants for micro businesses, on a project that seeks to deepen our understanding of what works in supporting the self-employed and micro-businesses.