Stop patronising the North – give it the tools to build a productive, inclusive economy

Yesterday the Supreme Court sought to reassure the British public that ‘Brexit would mean Brexit’ and that in hearing the government’s appeal against Parliament triggering Article 50 it would not seek to overturn the referendum result. This will, I am sure, reaffirm the view of one protester I spotted with a sign declaring Nigel Farage had been sent by Jesus Christ to fulfil the prophecy that the UK would come out of the European Union.

That prophecy has long been foretold in many parts of the country outside Westminster: “We could’ve told you our communities would’ve voted leave before Christmas”, said one Councillor in Sheffield in the days after the result. Dig deeper into the voting patterns of the referendum, as the Inclusive Growth Commission did in our interim report, and we see that in places where vote Leave was 60 percent or greater, there is support for claims that the EU exit was partly driven by post-industrial urban areas in England and Wales. Here Brexit revealed what we had secretly known; over the last three decades many people have come to feel disempowered, disenfranchised and disconnected. People have felt left behind by globalisation and decades of ineffective government and regional policy. 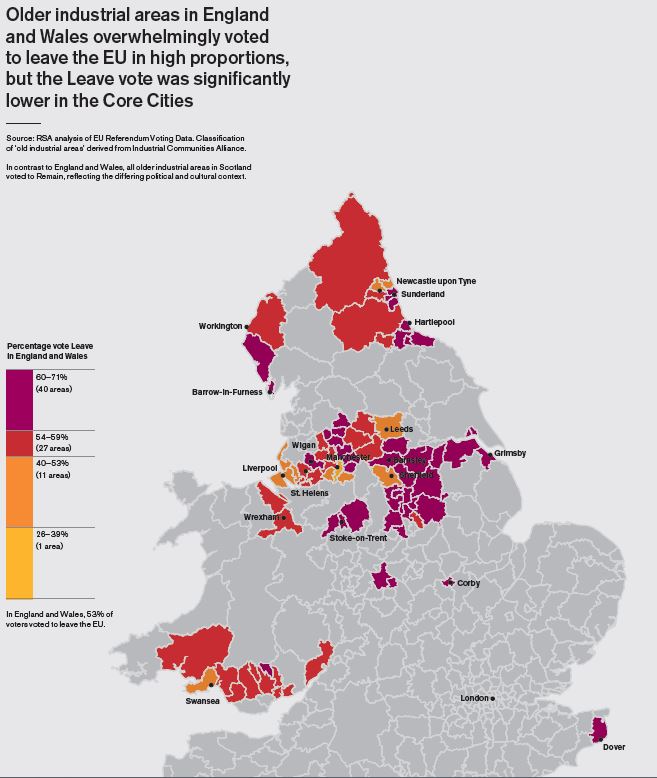 Others have made similar observations, including IPPR North, which will argue today that a northern Brexit negotiating committee should be established so that the voice of the region is heard. While it is true that many of the areas that voted leave are likely to be more vulnerable to the downside risks of Brexit, this same applies in other parts of the country, particularly in South Wales and Cornwall, where they have been the largest recipients of European structural funding. To focus on one region could serve to further entrench the divides that have plagued UK policy and economic performance over decades. It pleads the special case and continues to caricature the north as a victim of political and economic policy neglect.

Instead, the question is surely how we create an inclusive economy for the whole of the UK, giving places – including the big cities of the north – the tools they need to respond to the challenges of their particular areas? While MPs visit Sunderland as part of the Brexit Select Committee the tone should not be on how central government can mitigate the plight of a fragile economy (given welcome reprieve with No.10’s secret support package to Nissan), but how the centre can work with local government, business and other civic leaders to create a broad-based platform for inclusive growth and prosperity.

How can Whitehall – particularly HM Treasury – enable timely, high quality investment in social and physical infrastructure on a local and national basis? What role could the industrial strategies play in helping firms in all sectors – not just the high tech ‘wings and wheels’ of old - to push up the value chain? How can we build on Charlie Mayfield’s work to boost productivity, tackle the long-tail of businesses ‘just getting by’ and so create new opportunities for people to progress into higher paid work? Don’t keep patronising the North – give it the tools to build a productive, inclusive economy.

The voices of communities need to be heard. But if we’re really to learn the lesson from Brexit and use this as an opportunity to reengage and revitalise our economy, we need central and local government to be ready to listen and act for the long haul. As John Harris observed so poignantly in Sleaford ahead of yesterday’s by-election, “This is difficult, chewy stuff, see. Because the modernity that people are revolting against by voting for Brexit, it’s not just about the stuff that people on the liberal left like, like diversity and cosmopolitanism, social liberalism, tolerance, acceptance. Bound up in that modernity is also the absence of traditional community…that’s also the stuff that people take against. And if you’re on the liberal left and you don’t get that, you’re in a bad place.”

It’s not just a negotiating a new settlement with Europe and the wider world, it’s about understanding the deep malaise that is bringing global politics to a populist head. Part of this will be about building what I call political connectivity – fostering a sense of individual agency, community capacity and belonging, and the opportunity to be play a part in decision making that links from the most local to national tiers of government. This must be the bedrock of any place-based inclusive growth strategy.