Evidence from political psychology suggests that when contested issues become a question of personal identity, we bend the facts to suit our existing bias, so adding more ‘truth’ might make little difference. The deeper political malaise is an absence of trust.

So, it seems we have finally found the culprits for Trumprexit – it was the fake news wot won it.

The Oxford English Dictionary has declared ‘post-truth’ as its word of 2016, and Facebook is in the spotlight for (unwittingly) spreading fiction dressed up as fact. So if you found yourself on the losing side of either the US Presidential Election or Brexit, you might be tempted to comfort yourself that the pandemic of falsehoods and “pants-on-fire” lies proves that you still have truth on your side, and that your opponents were gullible at best and at worst, stupid.

But the evidence from political psychology reveals they were probably no more gullible nor any less intelligent than you. So what is the relevance of fact and fiction in political debate? 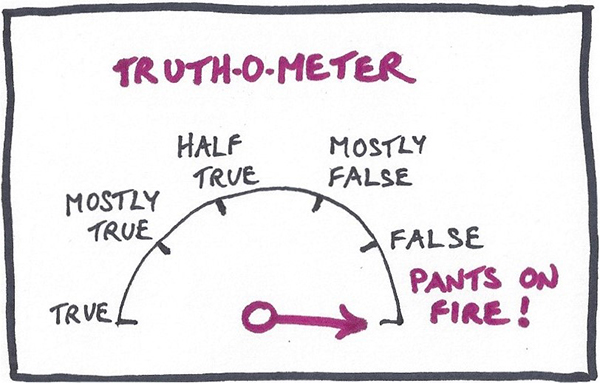 How can we explain people dividing into opposing camps, often bitterly divided, over questions which could be settled by looking at actual evidence?

In the USA a wealth of statistical data on gun use and homicides has not only failed to produce a consensus, it has led to both sides of the gun control debate digging their trenches even deeper. And yet this issue evokes no such bitter debate in most other countries, such as the UK, where there is a settled view about the relationship between gun ownership and gun crime.

Equally, Americans are generally unbothered about whether their food is genetically modified. As long as you serve it to them in sufficient quantities they’ll be happy either way. But this is an issue that creates huge political conflict in Europe. Again, there is no shortage of scientific data so why can’t we converge on ‘the truth’?

And in case you were enjoying a post-COP22 feeling that we have finally reached a social consensus on climate change, Trump appoints an avowed climate change denier to head the US Environmental Protection Agency.

For heaven’s sake, how much more data do we need?

Fake news and fact-resistant politics are nothing new

It is important to recognise that there was probably never a golden age of ‘truth’ driven politics.

“an invisible government which is the true ruling power of our country... We are governed, our minds are moulded, our tastes formed, our ideas suggested, largely by men we have never heard of... ".

And while Facebook might have taken the distribution of fake news to a whole new level, British newspapers’ grip on truth has often been tenuous at best.

But before hatching conspiracy theories and pointing the finger at those who manipulate information for political ends, we need to consider why we are so susceptible to falling for it.

As we understand more about the brain, we can identify why we reject facts that disturb our existing views

The rational human so beloved of economics textbooks is, of course, an entirely mythical creature.

Daniel Kahneman’s seminal book, ’Thinking Fast and Slow’, highlighted how much we are driven by ‘fast thinking’, based on rough and ready rules of thumb and pre-existing biases, rather than ‘slow thinking’ which brings logical reasoning to bear. The work of George Lakoff describes how metaphors, rather than bald facts, are crucial to our understanding the world.

Books like ‘The Righteous Mind’ and ‘The Political Brain’ have highlighted the emotive nature of political judgements and, as Reinsborough and Canning put it, ‘we can even track our neurological pathways of denial’.

For politically fired up issues, relevant facts might fan the flames rather than smother them

No surprise that the concept of politically motivated reasoning has become established in social and political psychology.

What is surprising is that according to Dan Kahan of Yale University, a specialist in the science of science communication, the more intelligent you are, the more likely you are to process information in ways that preserve our important political positions intact.

What all the examples above share is that your position on each of them is an important marker of your membership of a particular identity-defining affinity group. In other words, it places you within a circle of people who think the same thing, and that the approval of this group is really very important to you.

In fact, it is a critical part of who you think you are.

Now we’ve really raised the stakes in our game of truth. What happens when some new information comes along that is relevant to this identity-forming belief of yours? If it challenges your preconception will you change your view? Will you tell all your friends about it on Facebook? Perhaps not, if you have observed the level of post-Brexit Facebook fallout.

So what does happen when you encounter new information?

Kahan argues that you will,

“conform your assessments of all manner of information—from persuasive advocacy to reports of expert opinion; from empirical data to your own brute sense impressions—to the position associated with your respective group.”

We do this not by rejecting the fact outright, but by concluding that the source is not sufficiently authoritative or expert to outweigh our prior conflicting view.

This is rational from a personal point of view, because the cost of transgressing the social norms of my affinity group are higher than the benefits of changing my world-view to accommodate the new information as part of an attempt to converge with my opponents.

What’s more, people who score higher on numeracy and reasoning tests – ie are more rationally intelligent – are more likely to make the facts fit their opinion than those with lower scores.

In other words, if you throw more factual information into a highly charged political issue not only will the opposing sides become more entrenched, but the most intelligent will be the most polarised.

So if things are this bad with scientific issues, you can see why they are so much worse with economic issues.

For all its enduring mathematical bluster, economics is not a science. As I have argued before, while it is outrageous to paint blatantly misleading statistics on the side of a campaign bus, it is also wrong to present the intelligent guesswork of Treasury economists as facts.

So if we can’t settle contentious issues with facts, what hope is there?

Politically motivated reasoning might seem a pretty serious threat to the faith in human rationality and social progress that is represented by an enlightenment era organisation such as the RSA, but do not despair. After all, we are in the business of 21st Century enlightenment and for this we need other qualities such as curiosity, empathy, compassion and trust.

Kahan’s research demonstrates that people who have an innate curiosity, and who enjoy consuming scientific information and reasoning for its own sake, can overcome politically motivated reasoning. For this group, increasing the shared base of factual information can move us in the direction of consensus, even from a highly polarised starting point.

Unfortunately, how to find the scientifically curious, and how to encourage more of us to be this way, is not yet known. The RSA’s investigation into creative approaches to education might hold some of the answer, as does our work on the Citizens Economic Council.

We will be reporting back on the impact of high-quality deliberation on our economic views, but what seems clear already is that placing too much emphasis on post-truth or fake news is a distraction from the more urgent and important work of understanding how we come to be so bitterly and personally divided over key political issues in the first place.

Representative democracy, with its paraphernalia of instant soundbite policymaking, verbal jousting for the cameras, and now the laser-targeting of swing voters in swing constituencies to win more power with ever fewer votes, seems incapable of healing these divisions.

We need to find new tools that can heal them, from the more radical devolution of power to communities, to fostering stronger civil society movements, to developing community business leaders, to the use of new online deliberative tools.

So the solution to a post-truth world is not more facts, it is more trust.

Edelman’s annual trust barometer measures the degree of trust in key institutions – government, business, media and NGOs. Although it shows a recent improvement in trust in institutions, levels of trust among the mass population public are still low at 40% in the UK and 45% in the US.

So the real concern is not so much that we are in a post-truth era, but that we have entered a new post-trust reality. It follows that the important work is not to seek facts but to build bridges.

The facts can look after themselves. Let us instead pay attention to our social cohesion.

Find out more about the RSA's Citizens' Economic Council which is exploring deliberative methods of engaging citizens in economic policymaking.