The Visual World of Women Inventors and Innovators

A group of RSA fellows have melded their visualization tools to tackle one of the most intractable problems of our time: the gender gap.  Despite massive efforts to close the gap, statistics remain abysmal about the uneven representation of women in history and today.  To get a completely new picture of the challenges, we decided to create The Women Inventors and Innovators Mural (Wii-Mural), showing women’s achievements in different sectors against the backdrop of their historical eras.

The Wii-Mural is a 100-plus year timeline mural showing patterns and trends, with historical details aggregated in a dynamic visual database, DebateGraph.  RSA Fellow Ellen Lovelidge and I created the original 100+plus year timeline as a 4 by 12 foot hand-drawn mural then digitized it. We worked with RSA Fellow David Price, the co-founder of DebateGraph, to create the database, and then brought in long time collaborator and information-visualization specialist, Bonnie DeVarco, to curate an online 3D gallery for the mural. 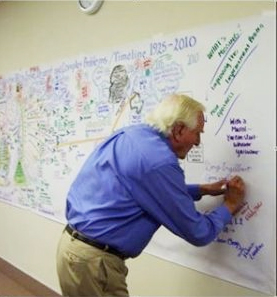 All of us were inspired by our association with technology inventor Doug Engelbart, who had a vision for raising humanity’s Collective IQ to solve global problems. Working closely with Dr. Engelbart and partner Valerie Landau, we created our first timeline mural back in 2008 with multiple streams of data converging in the 4 x 28-foot Co-Evolution mural to help us understand the relationship between technology and culture. We discovered that conversations around these giant information murals help us find solutions that were in plain sight.

Like all maps, the Wii-Mural has a “key” to identify the categories for women on the mural, but it is a different key than one might expect. Instead of naming traditional disciplines such as chemistry or leadership or computer technology, we decided to place women into categories that focus on the outcomes of their work.  We did this because research – including a study by Rosemary Edzie at University of Nebraska –has shown that young women tend to be motivated by having a positive impact on society rather than recognition or other factors. So, for example, we don’t have a category for computers or psychology, but we do have a category for “augmenting human potential” that encompasses both. Criteria for inclusion on the mural include that the woman’s breakthrough discovery or action ultimately impacted at least a million people in a positive way. Ironically, some of the women we talked to shied away from inclusion because they did not want to be in the limelight, but we talked them into it.

Our goal with the Wii-Mural is to shine a light on the hidden achievements of women, create new conversations, defy taboo topics, and bring women and men together to explore the gender gap more deeply. And the DebateGraph information layer enables everyone to add more to the mural, engaging in constructive dialogue with others around the world. Although the first version of the mural is U.S.-centric, we plan to expand over time to encompass the global stories. 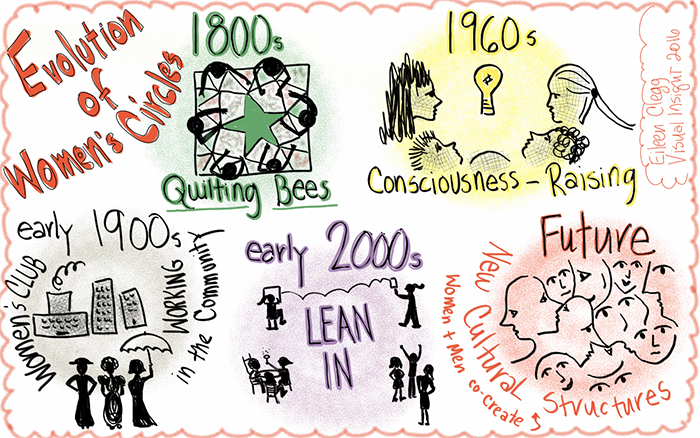 We already have some takeaways.  By looking at large cultural shifts in women’s impact, we found they were often preceded by periods of cultural structures of conversation: Quilting Bees of the Agricultural age, Women’s Clubs of the Industrial Era, Consciousness Raising in the Sixties, and “Lean In” in the 2000s.  This a-ha led us to a pivotal question toward solving the gender gap:  What cultural conversation norm is evolving that will lead to women having equal impact and representation on our planet?  One theory is that the next breakthrough will involve conversations between men and women about topics previously taboo. These kinds of conversations frequently are punctuated by statements such as, “Really? That bothers you? Tell me more.” 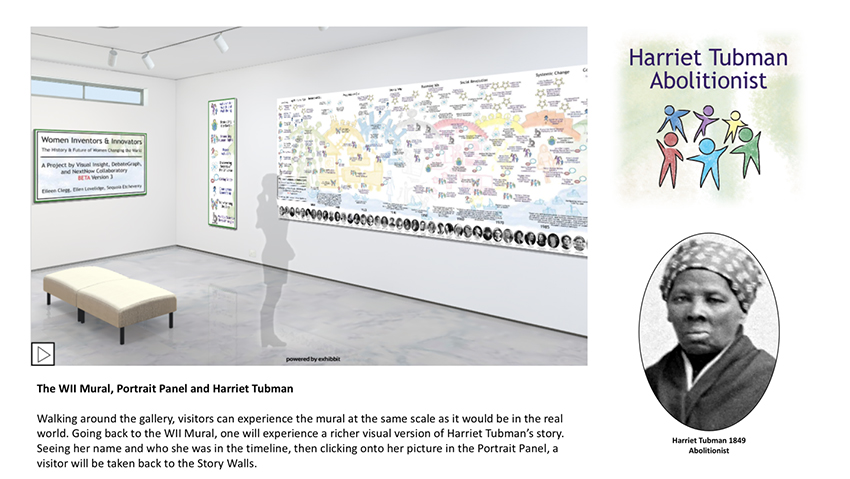 These conversations already are happening in groups working together in a room with the mural, and we want to scale these conversations online. We are grateful to another RSA Fellow, Mei Lin Fung, for having the idea of Bonnie DeVarco creating the 3D gallery for the mural. Having conversations in an online 3D world creates a new comfort level and sense of personal presence. Now the art is coming to life, as Bonnie is highly attuned to how online environments affect our thinking, based on her anthropological studies of ancient cultures. To paraphrase Marshall McLuhan, the medium is the message. We are developing a beautiful online space, where leading edge technology meets ancient visual wisdom and creates an environment that’s friendly to diverse groups.

We launched the gallery during a conference at Google in Early August, showing the online gallery. That day, we also had the paper murals—the Wii-Mural and the Co-Evolution mural—on display. In the picture below, people using old-fashioned tape to hang old-fashioned murals are technology leaders, including Bonnie, Mei Lin and Vint Cerf, who is the co-inventor of the Internet and today is focused on how the Internet can best serve humanity.

We see the future:

We welcome involvement from our RSA fellows. Please:

The Wii-Mural is a new approach – using art to problem-solve together – combining imagination with learning and action. It’s a grand experiment in visual communication that will be defined by the people who become involved.

(Thank you to Dan Esbensen and the rest of our team for help on the article, and to Claudia Welss and Vint Cerf for your support)