How to plan for Brexit

Brexit is the biggest political project of the decade for national government in the UK. But don’t be distracted. As the Brexit clock ticks on in 2017, we need to start planning for Brexit’s impact at the local level – in neighbourhoods and in workplaces.

Negotiating Brexit is a national endeavour. Planning for post-Brexit is only partly a national exercise, it’s also your responsibility. Brexit is likely to impact your job, your organisation, your shopping bill, your investments and your local economy.

How do we plan for something when we don’t know what it actually involves? It is time to escape that paralysing mindset. As US President Eisenhower said, “I have always found that plans are useless, but planning is indispensable.”

The advice last month from British Chambers of Commerce was simple: assume the hardest Brexit, seek to mitigate the worst impacts of this, and understand how to capitalise on opportunities that will emerge. If you are optimistic about the impact of disruption…here comes a big one. 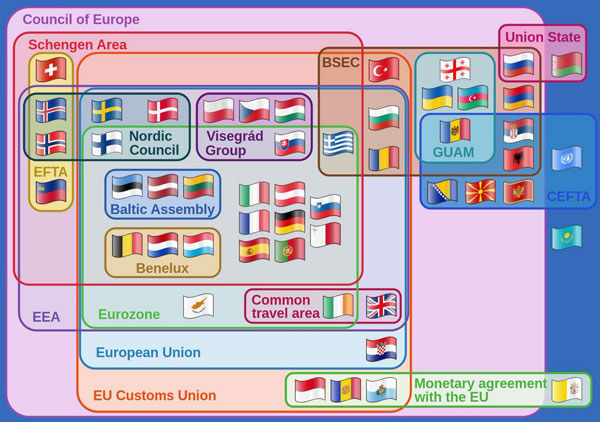 None of the above: The UK could end up in 2019 with few ties to European institutions. Planning on this basis is prudent; each comes with a condition of membership which is considered unpopular in domestic politics.

So, assume that from April 2019 your employer, the shops and banks on your high street, your neighbours and the workers who make the products you consume, face tariffs and other barriers to moving people goods and services between the UK and our 27 EU neighbours. What should you be doing now to plan for that transition?

If you are a Civic Leader...

Get the stats to understand the local picture: is your town like Chichester, where 1 in 11 residents was an incoming international migrant last year? Or Derry, where the figure is less than 1 in 1000? As Brhmie Balaram argues, the big Brexit issue of migration pressure is usually discussed as if it’s a national issue. In reality we have national policy on migration, but migration pressures differ hugely between local areas.

EU members will presumably want to secure the right of their citizens who reside in the UK to remain. The political reality is that it would therefore be prudent to assume that the UK will put those existing rights ‘on the table’ during negotiations, until their value is matched by a commitment from EU. This would potentially mean several years of uncertainty for those among the 3 million EU nationals currently in the UK. This period of uncertainty would in itself prove destabilising to firms and industries with large numbers of EU workers, from banking to restaurants to care homes.

On the domestic front, in many of the potential Brexit scenarios, the sector most at risk from the consequences is the public sector, which employs 5.3 million people, and obviously relies primarily on tax revenues to operate. Tax revenues decline when the economy shrinks – as may happen during the uncertainties of Brexit transition – and will be particularly vulnerable if the tax contributions of City firms diminish. Several post-Brexit scenarios would see the UK trade deficit shrink, but, ironically, this is because a transition recession which shrinks incomes, combined with a weakened pound, would make imports less affordable. Civic leaders should identify their local businesses and institutions that face the greatest disruption, and seek to support them.

If you are a Business Leader...

Start thinking fundamentally about whether the things that sustain your organisation, your customers and suppliers, and your local economy, will be altered by a hard Brexit arriving in 2019. A good example is visa-free business travel. We take it for granted that we can visit the continent to do business. If something is clearly essential, tell your MP to make it a high priority in Brexit negotiations.

With an eye on the macroeconomic picture, reduced EU migration is likely to alter the nature of economic growth in several ways. The UK’s economic output has grown in recent years on the back of a greater number of people working. The average value of what we produce in an hour’s work has actually declined since 2010. We rely on additional people joining the paid labour force to grow the economy (as well as growth in spending that is funded through rising debt). Since 2010, a third of the total employment growth has been EU nationals (Source: ONS). Looking further back to cover an entire economic cycle, 45% of employment growth since 2004 has been EU nationals (1.24m of 2.77m total employment growth). 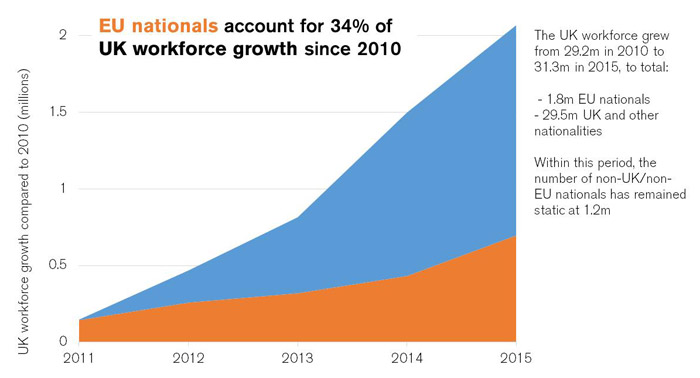 An adjustment to this form of growth is surely coming. Regardless of extending rights to remain to existing EU nationals in the UK, the inflow of additional EU nationals into UK vacancies will surely slow going forward. Whether the unemployed or economically inactive will fill new positions instead – or whether labour market growth will weaken entirely – will vary between local labour markets. The challenge is that the UK’s strongest growth potential lies in cities and counties far from the areas of the country with high unemployment, underemployment and inactivity. And many growth sectors have strong preference and rationale for the city or region in which they want to locate. So could your organisations support new workers through a transition to relocate? It’s time for fresh thinking.

Finally, it is incumbent on local leadership – in business, politics and civil society – to plan positively for what we can begin to map out for the economic landscape and social dynamics of coming years.

As EU funding for local projects ceases, how would you like to see the UK government support social and economic development under a newly designed programme? Many in the public sector groan at the procurement regulations which originate in EU legislation. Post-Brexit, we have the chance to define afresh how we ensure that £240bn of public spending annually is procured fairly to maximise value to the public. The RSA's Inclusive Growth Commission is considering these opportunities.

Could you in fact contribute to or initiate local conversations about how to make the most of Brexit? There are many divisions to be bridged, across and within different communities in the UK, but they are more likely to be healed if people come together locally rather than join national campaigns which entrench national positions on issues which will play out differently in the local areas where we live our daily lives.

Just as we need to ‘do’ politics, we need to ‘do’ Brexit, not just listen, watch, read and pontificate. It is a tempting comfort to ‘elevate’ the conversation. Many US commentators responded to Brexit by asking what it meant for Trump’s prospects. Many in the UK, including the RSA, used Trump’s victory to speculate on the implications for liberalism in global politics.

If 2016 was a year of ‘wake-up calls’, in 2017 we’ve got to avoid staying in bed behind the safety of our preferred newspaper. Get downstairs, get the coffee on, and start planning with your community.