Special educational needs and disabilities and the arts: a creative gathering

On January 24th at Impact Hub Birmingham, artists, teachers, and fellows from across the West Midlands came together for an experiential workshop of non-verbal theatre and a facilitated discussion on the relationship between special educational needs and disabilities (SEND) and the arts. This event was the third Creative Gathering hosted by the RSA Academies’ Performing Arts Hub in the West Midlands (read about the first Creative Gathering).

The Creative Gathering was organised following an approach adopted by the RSA in Wiltshire and Peterborough, aimed at using creative practices to facilitate exchanges of opinions and the emergence of new ideas, as well as providing a space for people to connect.

Participants were greeted with drinks and food, and encouraged to introduce themselves to people they did not already know. Excitement was in the air as a beautifully diverse crowd including teachers from the RSA Academies, drama practitioners, and arts organisation leaders filled the room, united by a common commitment to improving the quality of SEND provision through the arts.

As the last attendees trickled in, the gathering was kicked off with a workshop on non-verbal theatre lead by Richard Hayhow. Richard has been the director of Birmingham and Coventry based Open Theatre Company for 22 years, developing pioneering techniques for engaging young people with learning disabilities through non-verbal communication and physical theatre.

Richard’s workshop was a valuable opportunity for the participants to get a taste of what the arts can offer to SEND provision by experiencing the transformative power of drama first-hand. Through imitation, dance, and improvisation, participants explored the potential of non-verbal communication, as tailored to the needs of young people with SEND.

From a pedagogical standpoint, the non-verbal interactive aspect of the workshop made apparent the richness of different vectors along which learning was occurring. The exercise undoubtedly represented an opportunity for the practitioner to learn about the workshop’s participants, through interpretation of their reactions to his prompts. At the same time, the participants themselves were learning about each other, through observations of each other’s reactions.

What was certain, and evidenced by video footage showing Richard (who does not speak Russian) run a similar workshop with young Russians with SEND (who did not speak English), was that non-verbal theatre can represent a playing field for people with and without special educational needs and disabilities, as well as people who do not speak the same language, to find common ground. 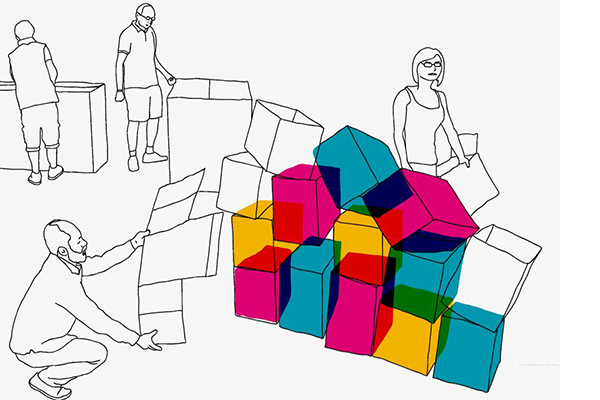 In turn, the opportunity for communication provided by Richard’s work can enable different groups to partake in the shared process of producing art, giving a voice to individuals who are typically less represented. As stated by one of the participants: one could see not only the value that the arts can have for young people with SEND, but the value that engagement with people with disabilities can have for the arts.

Building on this conversation, participants were invited to reflect on areas of their personal involvement with SEND provision which they would like to improve. These areas of improvement were discussed and grouped together into three main areas that the group would work on:

The group working on the first issue produced a particularly interesting and viable result. They highlighted the necessity of a network connecting teachers and practitioners in a meaningful and sustained way. While the Gathering had represented an opportunity to meet fellow travellers, the group felt that it would be necessary to set up what they called a ‘Fantasy Exchange’: a platform for idea circulation, sharing of best-practices, and match-making; in particular between schools and artists.

It became evident, as the working groups naturally dissolved into loose conversations, that what the participants needed the most was simply to get to know each other. Many of them reported feeling very isolated in their work, and warmly welcomed the opportunity to network.

The session drew to a close, sound-tracked by the exchanging of email addresses, phone numbers, and business cards. Could this be the ‘Fantasy Exchange’ in action? One can surely hope so. To maintain momentum and facilitate further interactions between SEND practitioners and artists/art organisations, we invite you to keep in touch with us (as outlined below).

The next Creative Gathering will be held on June 13th in a location to be determined in the West Midlands. If you are a creative practitioner/arts organisation based in the West Midlands and are interested in being part of future Creative Gatherings, or if you would like to collaborate with the RSA Academies, specifically around SEND, please email Mark Londesborough.

Thanks to West Midlands Arts Connect for supporting the Creative Gathering, to Impact Hub for hosting us, to Richard Hayhow and The Open Theatre Company for the great workshop, and to everyone who participated and contributed to the rich discussion. We hope to see you again soon.

Find out more about the Performing Arts Hub.