What is the role of a think tank or social change organisation today?

What is the role of a think tank or social change organisation today? While this is unlikely to be a burning question for many, it is something we, at the RSA, regularly consider as we increasingly understand what it means to have an impact.

We live in unprecedented times characterised by rapid change in the way we live and work, coupled with (seemingly) insurmountable societal problems. It is within this context that we believe institutions who are committed to social change continuously question and adapt their existing models to respond to and address society’s challenges. The same is true for think tanks, who are not often considered as civil society actors but have the potential to play a vital role in the development of a country’s future.

Today we launch a RSA Global discussion paper entitled, Innovation in Think tanks - Policy influence and change in Developing countries which explores how think tanks support social change and how they must be fit for purpose to enable progress in their local context.  The focus of the paper is on the experience of think tanks in the global south, how they operate and why donors need to pay more attention to them. Think tanks are unique in that they exist at the intersection of evidence based research and policy making, and their multi-disciplinary audiences (governments, policy specialists and the wider society as whole) allow them to be potentially powerful force for ideas. 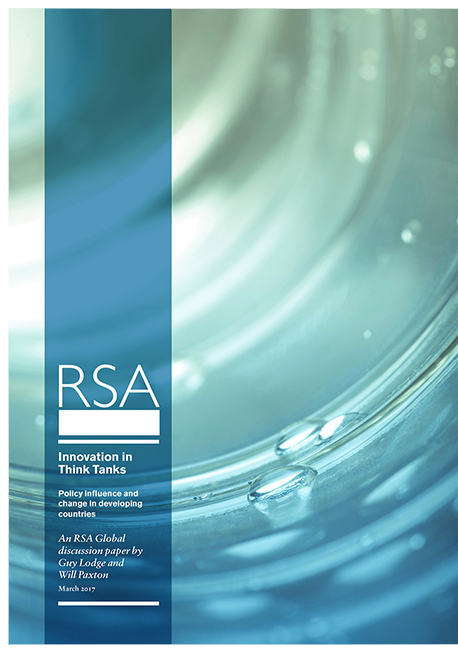 At the RSA we believe the current lack of trust in government and institutions is, in part, due to a failure of policy solutions that really tackle society’s intractable problems. For the public, experts and their datasets do not describe reality, and any attempts to solve problems are often too narrowly defined, attending only to a few policy levers in lieu of reviewing the system as a whole. Or, these solutions suffer from a strict path dependency, following predictable steps towards predetermined outcomes which, in reality, this is rarely the case.

For innovative solutions to truly address the lives of all people and leave no one behind social actors, such as think tanks, must move beyond its traditional core model and innovate. This paper argues that they should act politically and exercise power and influence when necessary. The paper suggests three directions for innovation that we open for discussion:

The RSA is committed to maximising its global impact and welcome comments and thoughts on how think tanks can play an increasingly effective role in social change.