Ask the audience: what is the point of the economy?

In 2017, public trust in experts is seemingly at an all time low. This is old news of course, but we are yet to see many serious attempts to unravel the reasons and create mechanisms that could rebuild trust.

It's one of the many reasons why, back in February, I decided to attend the first meeting of the RSA Citizens' Economic Council in London.

My colleague Reema has wonderfully explained the purpose and objectives of the Council in previous blogs, but I have to admit that I was still sceptical about how it would work in practice. Getting a group of 30 strangers in a room to talk about economics and policymaking sounded ambitious to say the least. Would people get on? Would they be interested in the topic enough to talk to one another?

As the day wore on, my scepticism faded.

Mid-morning, the lead facilitators announced that we’d be playing a game called ‘Where’s my Chair?’ The group was divided into small teams of six, and each team had to face the ‘economic reality’ that they now only had four chairs available to sit on. The challenge was: how should we manage this shortage? 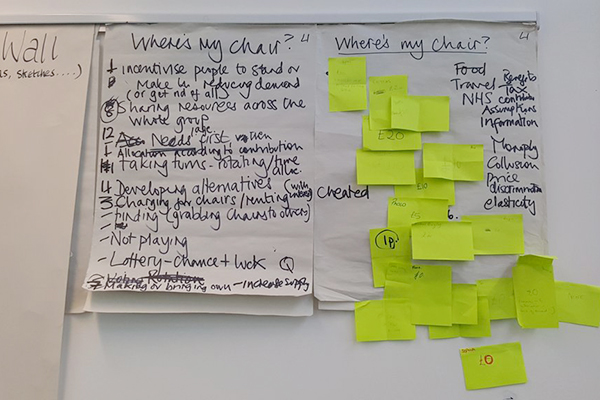 Each team came up with a variety of answers which the facilitators compiled into a master list. Everyone was then asked to vote for their preferred solutions. The results were as follows:

Interestingly, most people voted for allocation to the most needy and vulnerable first. The second most popular choice was to develop alternatives to chairs. There were barely any votes for buying and selling chairs, or for taking resources from other teams by different means (which is perhaps more akin to how our economy actually works and how people behave within it). It was pointed out by the economists observing the event, that they would not usually base their predictions on rational actors putting other people’s needs before their own. This suggests that there is a contrast between what current economic models assume about our behaviour, and the reality of how we make financial decisions. 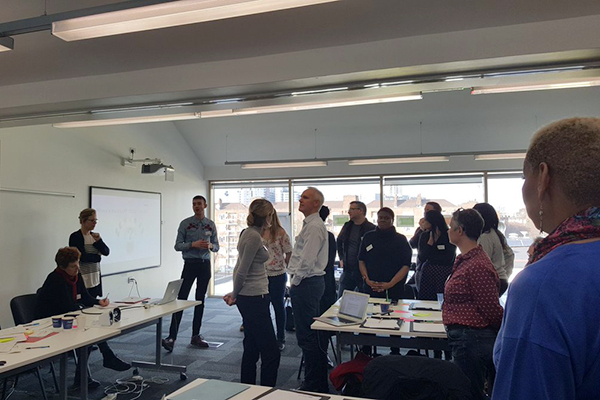 All the participants were then asked to suggest what price they would be prepared to pay for a chair, with the highest bid becoming the price of the chair - its market value, so to speak. Yet, once the price had been settled a few of the citizens said that they felt cheated. They didn’t feel they had enough information to really understand the value of the chair. What did not having a chair really mean? Did it mean sitting on the floor or standing (quite different levels of comfort)? Therefore the ‘value’ of the product felt arbitrary because it was based on the judgement of a diverse group with subjective needs and incomplete knowledge.

It was like watching the cracks in the economy emerge in real time.

The game then led onto a discussion about what is perhaps, the crux of the issue: what is the point of the economy?

Growth is often the standard answer (if you ask the RSA we’ll say inclusive growth), but that was not the answer given by the citizens I listened to. Their answer, almost unanimously, was that the economy exists to improve quality of life. You could argue that economic growth, if evenly distributed, should enhance quality of life but as the conversation evolved we discussed examples where that wasn’t always the case.

For anyone who’s ever taken a summer holiday in France, you may have noticed that shops, especially in more rural areas, will often close for three weeks in the summer to give the owners time off for a holiday - a clear prioritisation of wellbeing over profit. Similarly, I feel as though I see fewer advertisements in France, and more attempts to decorate otherwise dull environments such as car parks with hanging baskets or sculptures. A societal leaning towards aesthetics over commerce, perhaps? Of course these are just anecdotal observations, but they’re observations that push me to consider what quality of life really means, and whether the different elements that enable us to live well, are in opposition to the drivers of economic growth. 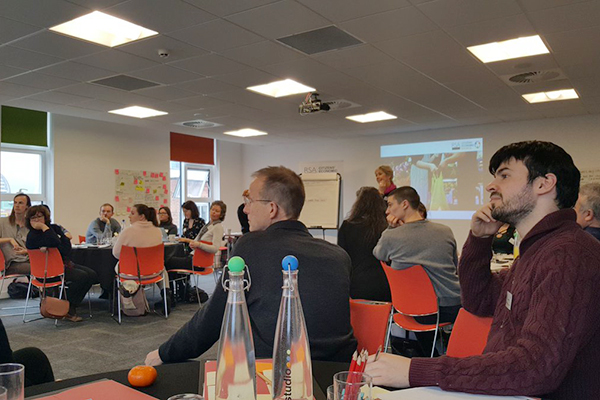 One citizen put it this way:

Have we been tricked into getting on the treadmill? If we reframed everything, had our own allotments for example, we’d save the planet, but it’s that versus business.

People need to take their lives back – we’re products of society, we’re overbuying clothes, food, and we’re just contributing to the problem. Charities shops are bursting with stuff that people don’t want.

There was a lot of passion and consensus from the small group I worked with that reorganising the economy so that quality of life is at its heart, is the most important thing we could do.

One final thought. We must also start to re-prioritise face to face interaction.

Digital communication might be useful for sending information quickly, but for things like building trust and respect, we have to sit down and talk. Reality television shows, even current affairs programmes like Question Time, give the impression that people argue more than they agree. What I found at the Council meeting was the opposite. To establish a basis for discussion, our citizens sought common ground first, and I certainly found that having to look people in the eye is a useful way of finding out whether you really own your opinions. Without veering fully into Brené Brown territory – face to face discussion requires vulnerability, and that’s a good thing.

I look forward to the next one.

Find out more about the RSA Citizens' Economic Council