Alone together: Why it’s time the self-employed joined forces to overcome adversity

Our new report with the Federation of Small Businesses (FSB) calls for a movement of mass self-organising among the self-employed. Whether it’s cash-pooling schemes or micro finance initiatives, sick pay funds or time share agreements, the scope for bottom-up initiatives to improve the lives of the self-employed is vast. Here we give an overview of the report’s findings.

A little over 15 years ago, a small group of Dutch freelancers in Utrecht came together to create their own collective sick pay fund. This Broodfonds, or ‘Bread Fund’ as it is known in English, worked on the basis that members would contribute money into an account every month, which could then be drawn upon if they fell sick.

It was to be distinct from typical income protection insurance in several ways. Applicants to the scheme would not have to complete medical checks, and they would be free to leave at any point and take a portion of their contributions with them. On top of this, a person’s claim would be judged by peers in their group rather than by a distant algorithm or adjudicator. 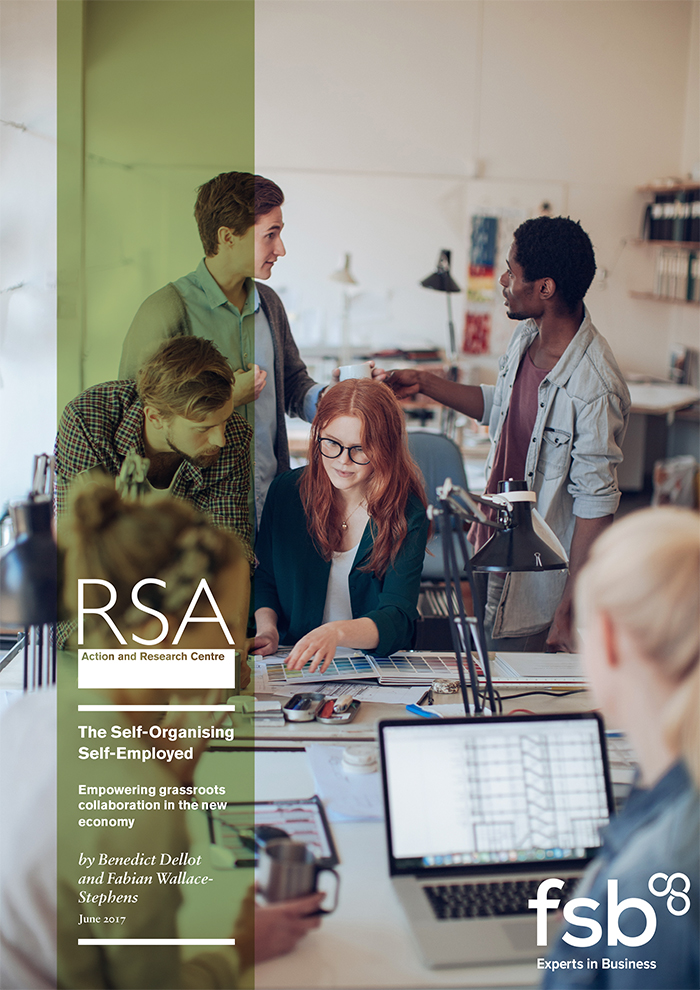 Observers at the time would have thought their plan unworkable. How can such a scheme exist without medical checks? How could it be financially stable if anyone could leave when they wanted? Yet fast forward to 2017 and the Broodfonds network has grown to 12,500 self-employed members spanning 280 groups – a number that continues to grow. There are also plans to launch a UK version of the scheme this year.

Broodfonds is just one example of how the self-employed are increasingly banding together to offer mutual support. There is renewed interest in longstanding institutions such as cooperatives, unions and friendly societies. Novel initiatives are also gathering attention, including salary guarantee funds (SGFs) that pool the cash of self-employed workers to manage late payments, and platform cooperatives which are owned and governed by their users (think of Uber but owned by its drivers).

With little known about how these schemes operate in practice, the RSA and FSB set out earlier this year to explore their histories and understand how they came to be.

In the report we profile 9 case studies in total, including:

SMart, Belgium – A one-stop shop service for the self-employed that includes a salary guarantee fund made up of contributions from individual members. This can be used to settle invoices within 7 days in the event of late payments from clients.

IndyCube and Community Union, UK – Community Union has teamed up with the Welsh IndyCube co-working space network to give their self-employed members access to a package of affordable invoice factoring and legal advice services.

East End Trades Guild, UK – A community of small, independent businesses in East London that use community organising methods to hold the government and local landlords to account. The EETG has been successful in protecting tenants from eviction and controlling rent increases.

Loconomics, US – A platform for booking local services (akin to TaskRabbit), which is cooperatively owned and governed by the same service professionals that use it, including personal train­ers, child carers and therapists.

Swindon Music Cooperative, UK – A group of independent music teachers who have clubbed together to pool the costs of marketing, administration and debt collection. It also coordinates peer-to-peer learning among teachers and arranges professional development training.

Coopaname, France – A cooperative that technically employs its self-employed members so as to give them access to social security protections usually reserved for employees. It also encourages project collaboration and co-tendering among its members.

RICOL, UK – A London-based language co-operative run by and for self-employed language professionals (interpreters, translators and language teachers). RICOL markets the services of its members and connects them to clients, but at a fraction of the cost of a typical agency.

Outlandish and CoTech, UK – Outlandish is a worker coop where tech developers pool their assets into one organisation, with each person’s pay set according to their experiences and needs (to a maximum pay differential of 1:3). CoTech is a network of coops that allows tech coops like Outlandish to trade staff time.

Each of these schemes has had a tangible impact on the self-employed workers it serves. Freelancers in Holland have been offered a financial lifeline at the point they have fallen sick, business owners in Belgium have seen their volatile incomes smoothed out thanks to a salary guarantee fund, and music teachers in the UK have been able to concentrate on their profession without having to worry about marketing their services or chasing clients for late payments.

But as we also discovered, self-organising is by no means plain sailing. Founders must grapple with a series of dilemmas as they attempt to get their initiatives off the ground. Some found it difficult to limit opportunities for free-riding while remaining inclusive and accessible. Others grappled with the task of staying in the black without depending too heavily on outside funding that often comes with strings attached.

These are vexing challenges, but far from irreconcilable. And certainly not limited to self-organising. It is worth emphasising that many of these schemes exist to plug gaps in support that we might usually expect from the state (via welfare) or from the market (via financial products), and therefore deserve greater time and patience. A platform like Loconomics was up until recently unheard of, as was the kind of pact formed by Community Union and the IndyCube co-working space.

The question is where we go from here. One option is continue with business as usual, to be content with the slow expansion of existing schemes and welcome the odd establishment of new ones.

Yet why be so timid in our aspirations? It is not impossible to imagine a future where the majority of the self-employed are members of a salary guarantee fund that manages late payments, or where self-employed sick pay funds can be found in every town and city of the UK. Sceptics should look at the experience of Italy’s Emilia Romagna region, where a third of GDP is accounted for by cooperatives.

Self-organising can and should be part of the mainstream economy, and our report concludes with several recommendations to create a broader movement for change. This includes adopting new messages to make self-organising more appealing to mainstream businesses, encouraging unions to incubate and lend resources to bottom-up initiatives, ironing out flaws and clarifying the interpretation of different regulations, and weaving self-organising schemes into the delivery of Universal Credit and employment services like the New Enterprise Allowance.

With Whitehall set to be gripped by uncertainty for the foreseeable future, now more than ever the self-employed need to look to themselves for a helping hand.

Collaboration is no longer a dirty word for the self-employed