“You never change things by fighting the existing reality. To change something, build a new model that makes the existing model obsolete.” -Buckminster Fuller

Thammasat University’s School of Global Studies (SGS) recently started something unique. Under the provocative title of “What the Future?!” our team co-hosted an event with the Thailand Creative & Design Center (TCDC) that was supported by the RSA. The event brought together a diverse panel with an incipient community of “engagees.” Working together, we discussed opportunities for building a platform that would support social innovation in Bangkok, as well as throughout Thailand and the broader ASEAN region. What it will become remains to be seen, but if the depth of discussions and the energy present in the first event was indicative of what’s to come, then it seems we might be onto something.

There are a lot of great talks held throughout the “Venice of the East.” You could easily double-book your calendar with events that feature thoughtful experts sharing insights on an array of important topics. But such programs tend to put space between speakers and attendees with communication—aside from a few questions from the audience—tending to flow in one direction. This works great for conveying knowledge and experiences, but not so well for things like community-building and idea generation.

Our faculty team has been working to create something different—something that aims to be both inclusive and generative—so we eschewed prepared talks and instead invited an eclectic group to take part in a panel that represented a wide range of ages and backgrounds for spontaneous discussion around the needs and opportunities of our social innovation community.

Courtney Lawrence, a member of the SGS faculty and the founding Director of DSIL Global, ably directed the conversation affording the speakers space to share their perspectives. While the panel was having fun, the room filled to capacity and the crowd spilled out into the foyer, and then down the hall… 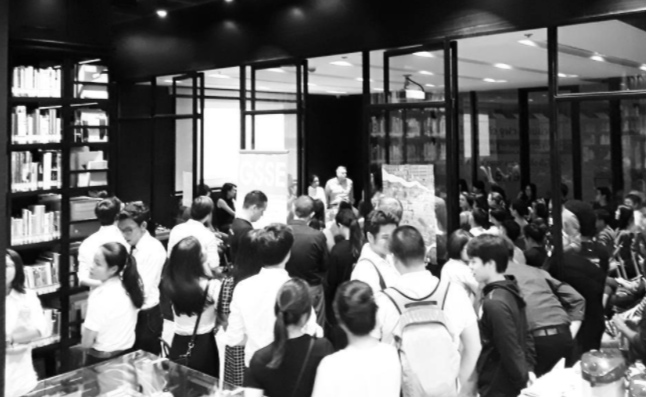 A "capacity and then some" crowd at TCDC Commons in Bangkok for What the Future?!

The panel’s forty-five minute session flew by. Fortunately, the event was just getting warmed up. “Engagees” were given color-coded nametags at registration and as the panel ended all were sent to sit in the corner (where their discussion group would meet). Our panel then paired with faculty members in facilitating further discussions. The groups picked up where the panel left off affording all the opportunity to engage—an opportunity most seized.

The groups shared ideas about what they thought was missing in the social innovation ecosystem and concerns like wanting to ensure that community members living in rural areas were included in our efforts. The Thammasat team captured the ideas that were shared and will work to incorporate them going forward as one of the goals of the program is to keep it evolutionary in nature. We want to keep people coming back whole also working to make the limited time we’re able to spend together as productive as possible.

The panel was scheduled to run from 6:30 pm to 8:00 pm, and the event “officially” ended on time, but the crowd stayed thick for another hour as the  evening’s buzz slowly subsided. Faces were put to names as cards exchanged and the long work of building community got under way. Filaments of connective tissue extended from existing relationships as new ones started to form.

Going forward, we’re going to run a structured event with a panel and breakout discussions in even numbered months. In between those events we’ll get together for community-building meetups. One of the overarching goals of the effort is to spark a community that will work together to drive positive change.

On June 14, we will discuss the challenges and opportunities presented by globalization and recent economic trends. In mid-August, we’ll have a panel on the evolving nature of work and technology. If you’ll be in Bangkok for either of those events, please come join us!