With the current focus on the importance of digital literacy, we should perhaps be asking what is happening to traditional literacy skills such as spelling, punctuation and grammar? Can we use a boy’s love of computer games to help improve these skills in an engaging and competitive way?

A priority in education for many years has been to improve the literacy and numeracy of every learner at every level. Many educational institutions achieve this by embedding these skills throughout all curricula, regardless of subject. Finding engaging and meaningful ways in which to embed these skills can sometimes be a difficult and fruitless task with research showing that engaging boys in literacy can sometimes prove to be even more challenging.

‘Serious games’ are games in which the sole purpose is not simply for enjoyment sake, but for a different purpose all together. Serious games include aircraft, medical and even welding simulation! The rise of gaming in education is growing at a rapid rate with interactive quiz platforms now dominating formative assessment in the educational environment. For our project, we wanted to develop some serious games which develop literacy skills in each learner, but which also have that fun element that computer games are known for.

Right from the initial idea, it was extremely important to get our learners’ involvement. Learners needed to be motivated and engaged by the games and the only way to achieve that was to ask what they enjoyed playing and what they would want from a serious literacy game.

So, over the past year, LITUP Games was developed through working closely with a group of post-16 learners. These learners were involved at each essential stage of development; from initial game concepts and design, right through to piloting and evaluation.

And in working together, we have developed three simple yet effective serious retro games:

To measure the impact and success of the LITUP Games project, we employed various evaluation methods. Pre-testing and post-testing was used to measure the distance travelled by learners. Focus groups and questionnaires were used and all game play data was collected automatically.

“The lynchpin that determines the success of any training effort is engagement, and that’s where a game based solution excels. With a serious game initiative, the learning content is delivered in a game-based environment.” – Growth Engineering

The games were accessible by a group of 80 mixed ability learners. The games could be played on any web-enabled device such as a mobile phone or laptop, anywhere anytime. We found that 85% of learners showed significant improvement in basic literacy skills after a four-week period of casual gameplay.

The game play data confirmed that each time a learner re-played a game their ability and score increased - just like it would when playing a traditional computer game played for enjoyment. This demonstrated that the learners were learning the rules of the game and fully understood the questions by offering the correct answers. Essentially the learners are repeatedly applying skills and knowledge to deepen their understanding and further their development in literacy. 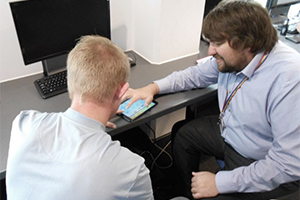 One of the main findings demonstrated that learners were much more aware and conscious of their own spelling, punctuation and grammar. For example, when we asked one learner what they had learnt they simple stated: “I learned where to put a comma.” This may not seem like a vast improvement to many, but for a post-16 learner who has been in education for over twelve years, this could be a personal breakthrough. All of the learners were actively engaged with LITUP Games and all stated they wanted to learn through gamification more, as learners were more inclined to play the game to develop their literacy skills rather than working through uninspiring online resources.

Learners from level one (equivalent of GCSE - grade D to G) through to level three (equivalent of A level - grade A to E) all participated in the games and were enthusiastic with their comments. The games received positive praise and learners felt this approach to upskilling their literacy was the way forward. When learners were asked directly, LITUP Games was described as fun, educational, interesting, competitive and helpful, with the odd “too easy” from the more hardcore gamer amongst them!

The next steps of this project would be to continue to develop game content using existing frameworks, such as the National Literacy and Numeracy Framework which is designed to help teachers embed literacy and numeracy into all subjects for learners aged 5 to 14. Another potential of developing could be the use of adaptive games, which identifies the current skill level of learners and adapts game play to the appropriate level.

Overall, it is evident that this type of learning engages and motivates boys in literacy, and the question we are now asking ourselves is: how can serious games be used to improve reading, writing and numeracy?

If you want to find out more or experience the games for yourself visit www.litup.games or contact us at [email protected]