The RSA Student Design Awards challenge designers at university level to tackle briefs focused on pressing social issues. On the morning of the ‘Designing our Futures: the 2017 RSA Student Design Awards Ceremony’, two of this year’s winners - Ethan Howard and Thomas Wastling - reflect on their journey from picking up the RSA briefs to pitching their solution and receiving the results…

Although neither of us were studying in Leicester (Ethan in Uppsala and Tom in Cranfield), we went to school together there and were back home working on our university theses when we heard about the RSA Student Design Awards. The competition and the briefs all looked really exciting, but there was definitely a danger of it being one of those things that seemed liked a great idea but would never actually get done. So, we drew up a plan and set ourselves some deadlines to make sure we made progress.

The first hurdle was deciding which brief to go for. We both made a list of the ones we personally wanted to have a go at, each trying to argue the case to the other. In the end we managed to settle for a couple that were most promising: Re-work and Learning for Life.

Luckily, the idea itself actually came to us pretty quickly, and although you probably shouldn’t settle for your first concept, we both felt that it had quite a lot of potential, so decided to explore it further. The idea is based on taking discarded computers from industry and installing a simple, intuitive operating system on top, aimed at people who didn’t have much experience with computers. This is based on the premise that most of the computers from businesses, although unsuitable for high-end use, are more than capable of being used for a bit of light surfing. The outcome of this is that it allows for accessible and intuitive computers at a low cost. 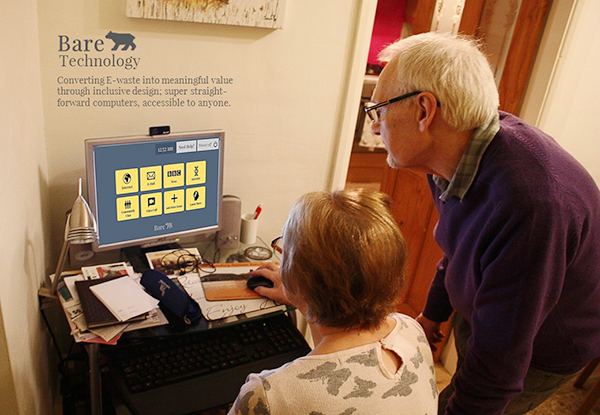 A bit of googling confirmed there wasn’t really anyone out there offering something similar. There was also a potentially a big unmet need, with numerous reports by Age UK outlining that there is a high number of elderly people who are offline, with lack of knowledge and cost being two of the biggest barriers. In an age where public and private services are moving increasingly online, there are areas where this section of the population are becoming isolated.

We then went about talking to potential end users, first with one-on-one interviews, then with focus groups held at a church coffee morning and a bowling club. Initially there were some communication problems; with somewhere between us, Tom’s grandma, the priest and the church group members, it got lost in translation that we were coming to teach people how to use computers - with someone asking how much money they should bring! But aside from the fear that we may be met with a disgruntled church group, things went pretty well. We built up a much clearer picture of the issues people are facing with their current technology and got a glass of port, some biscuits and a cup of tea in the process. At the bowling club, we were also given a pint each, a couple of computer anecdotes which we couldn’t repeat here, and picked up more key insights.

Along with the user research, we talked to a few universities and businesses to understand how the idea could bring them value as well. There definitely appeared to be potential to make their processes for disposing of computers more straight forward.

We settled on our name ‘Bare Technology’, based on the idea of stripping a computer back to its bare necessities.

The in-depth insights we gained from the research phase meant that the product design and development phase was a lot easier. We built the concept exactly around these user needs and brainstormed solutions off these. It also became pretty clear through the research that it wasn’t just the product itself that was the problem. Some people wanted support with small issues and barriers when getting to know the product, so we also designed a help service around that. 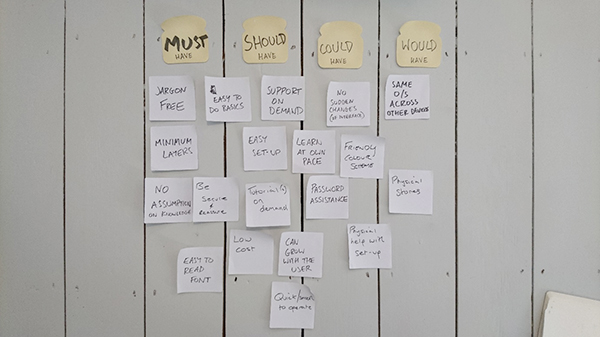 On the evening before submission, we were still frantically working on our financial calculations and business plan (luckily, we got a chance to work on these further before meeting the panel). As we did this, we looked through some of the past winners on the RSA website, panicking that ours wouldn’t be up to standard. In the end, we couldn’t decide which brief our concept fitted best, so pooled our resources and applied to both Re-work and Learning for Life.

To our surprise, we got invited to an interview, then a second one and then a third (it took us a while to work out how this was even possible… one was for the best business case for the Re-Work brief).

In preparation for the interviews and with some extra advice from our RBS/NatWest mentors, we developed a more functional prototype, designed the packaging, did some further user testing and produced a detailed four-year financial plan.

Though initially intimidating, the interviews were an interesting challenge to engage with the judges and test our idea on them. While we developed three separate pitches, it definitely gave us the opportunity to improve on our answers and the idea. It was hard not to feel sorry for Sevra from the RSA team by the end, who sat through all three interviews and knew the concept as well as we did!

We waited nervously for the result and were thrilled when we got an email through that we had won the Learning for Life brief! We were only finishing updating everyone we knew, when another email came in saying that we had also won the best business case for Re-Work brief. It was the most amazing outcome and feels even more surreal looking back at the whole project.

The whole competition was an incredible experience, it’s so lucky that we entered – and ended up winning two awards! It has also helped us bring our concept to life and we are now exploring the potential or turning it into a business (with the help from RBS). Watch this space…