After 9 months in the making, the long-awaited Taylor Review on Modern Employment Practices has been released.

Here are three key points to keep in mind as we work to ensure a level playing field for both workers and businesses while also serving the public’s best interests.

Many of yesterday’s snap judgments critiqued the Taylor Review for not going far enough (for example, on zero-hour contracts) or appearing to roll back workers’ rights (primarily when it came to guaranteeing minimum wage). These critiques tend to gloss over the reality of trying to find a balance between providing a protective buffer for insecure workers and maintaining individual autonomy and flexibility in the labour market.

As referenced by the Review, the Labour Force Survey released in March 2017 found that 68% of those on zero-hour contracts (fewer than a million in total) do not want more hours. While zero-hour contracts may feel exploitative for a minority, it would appear that most workers are satisfied with how these arrangements suit them. Banning these contracts would not necessarily guard against exploitation, but it would likely mean fewer people in employment and limited flexibility for both workers and employers. The Review proposed a fair compromise; zero-hour contracts can be deployed, but abuse will be curtailed by granting workers the right to request guaranteed hours (which will reflect the actual hours they have come to work after a year on the job). Employers will also be expected to pay a premium for any additional, atypical hours workers are asked to take on.

Similarly, the recommendation for adapting piece rates legislation has been disparaged, but it is unreasonable to expect that a worker is paid for simply turning an app on, especially if there is no job available for them to complete. While it may be controversial to suggest that ‘workers’ – a third category that sits between employee and self-employed (or ‘dependent contractors’ as the Review has proposed they be renamed) – aren’t guaranteed the living wage if they choose to work during periods of low demand, this recommendation was made in the interests of maintaining current levels of flexibility in the gig economy.

The intent was to dissuade platforms from moving to a rigid system of scheduling their workers, or dependent contractors, according to patterns of demand. Some have raised specific examples of concern, such as whether Uber drivers would still be paid if they were stuck in traffic and unable to complete a ride; these reveal that there are important details to be worked out, but, at least in this instance, it seems there is an argument to be made for paying workers as soon as they accept a job and begin investing the time it takes to finish it. 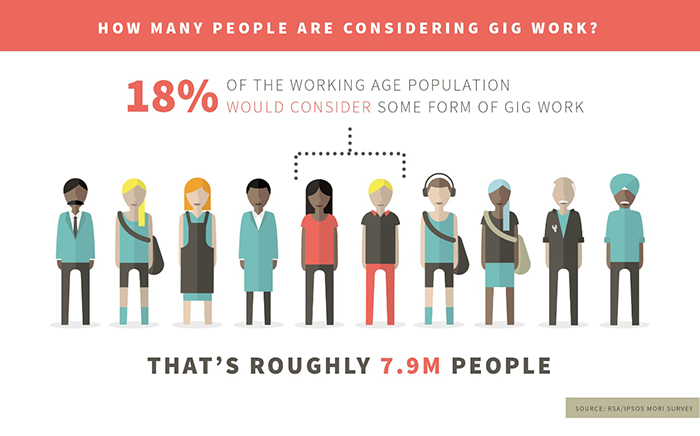 Taken from the RSA's report on the gig economy: Good Gigs - a fairer future for the UK's gig economy

That said, critics are right to question why the Review did not recommend abolishing tribunal fees. In the RSA’s own report on the gig economy, we recommended suspending fees for those seeking clarity on their employment status, and moreover, introducing a summary process (i.e. a fast-track option) to give workers an immediate indication of their status before pursuing a tribunal claim. However, our focus was on clarifying employment status rather than addressing broader issues (for example, employers discriminating against workers or failing to pay the minimum wage). We noted that there was a case to be made for abolishing tribunal fees in general given that there is scant evidence that the system is overrun by vexatious claims. Considering the wider remit of the Taylor Review, at the very least there should have been an explanation for why the team felt abolishing fees was not an appropriate measure to take. As it stands, £1,200 is a highly cynical obstruction in the path to justice for workers.

Overall, from a pragmatic point of view, the Review had to weigh up the interests of workers who value flexibility against those workers who value security and find a balance between the two. While workers were at the forefront of its consideration, the Review also had to be mindful of protecting workers without crushing new business models, such as the platforms of the gig economy. All in all, no easy task, and as with any compromise, bound to garner a lukewarm reception from all parties rather than fervent enthusiasm from any one corner. Even if this doesn’t make for a spirited revolution, it’s the most sensible course of action to pursue.

2. Employment law is only one lever of change

For the trade unionists and other activists who still feel disappointed in the Review, it’s worth keeping in mind that all avenues for change haven’t been exhausted. As the RSA’s report on the gig economy noted, employment law is limited in its potential to transform workers’ experiences of the labour market. The law will not guarantee that work is fair in all respects; for example, the law cannot guarantee gig workers more power over strategic decisions that affect them within the company or a larger share of the value that they’ve created.

In addition to reforming employment law, there is more that can be done to support sustainable business models to thrive and to address distortions in the market. For example, the RSA recommended that government play a role in seeding promising technology in the gig economy that could improve conditions in the labour market; nurturing platform co-ops; and modernising the Competition Act in the UK to protect workers’ interests alongside consumers’ interests. However, more pressure needs to be applied by a broad coalition of stakeholders before government agrees to do any of these things.

Unions such as Community have also demonstrated that workers can be supported by more out-of-the-(legislative)-box thinking. Specifically, Community has partnered with co-working cooperative Indycube to launch a new platform that will provide the self-employed with specialist support, advice, as well as access to Indycube’s network of co-working spaces.

3. Tax reform needs to be back on the table

It’s possible that the most ground-breaking reform proposed by the Review pertains to tax, rather than employment, law. While the Review shies away from making an explicit recommendation (an exercise in caution after the Chancellor was forced to U-turn on raising the National Insurance Contributions of the self-employed), it does suggest that the tax treatment of dependent contractors should be aligned with that of employees. This would mean that any company using dependent contractors would need to pay NICs on their behalf, which is currently not the case (those classified as 'workers' are treated as self-employed for tax purposes).

In the RSA’s own report, we presented several options for closing the black hole materialising in public finances with the rise of the self-employed (while the self-employed pay NICs, anyone using self-employed labour does not pay NICs on their behalf, whereas they would pay a rate of 13.8 percent per an employee). One of our suggestions was that rather than seeking to equalise the rate of NICs paid by the self-employed and employees as the Chancellor attempted to in the Budget, there should be a tax on those who use self-employed labour, whether they are households or businesses. Since gig workers are only in small part driving up the proportion of the workforce that is self-employed, this may be a preferable option for the Treasury over the long-term compared to the one outlined in the Review. In any case, there is still an urgent need to resolve discrepancies of tax to 1) deter misclassification of gig workers, 2) stop the erosion of the tax base due to the rise of self-employed labour and/or gig workers.

The Review is out, but that doesn’t mean the work is over – now is the time to push for the substantive change we’ve been wanting.

For those interested in learning more about the gig economy, we’ll be launching a blog series to help readers get to grips with this emerging sector, starting with what it is and why it matters.