Refugee education: a patchwork, not a ladder

The RSA’s recent Cities of Reciprocity report argues that “refugee communities have much to offer, given the opportunity to contribute” and that there should, therefore, be greater reciprocity between settled populations and newcomers. The research found that a broad range of people have a role to play in supporting refugees from education providers and refugees themselves, to charities, social enterprises, academics, universities, policy institutes, activists and volunteers. When these diverse stakeholders come together across a city, they can make a real difference.

RSA Fellow, Darren Abrahams, who is co-Founder of refugee education social enterprise Crisis Classroom and recent winner of a £10,000 Catalyst grant from the RSA to scale the organisation’s work, felt that the report spoke directly to his experience on the ground.

Brighton-born Crisis Classroom first started when the refugee crisis was hitting Calais, only 75 nautical miles across the Channel. Many people were collecting clothes, but Darren wondered if his experience as a cultural practitioner, educator and trauma therapist could be put to use in the “Jungle”. He went to Calais with Crisis Classroom co-Founder and teacher Kate McAllister to find out.

Once there, he spent hours speaking to people in a mixture of French, English and through drawings to understand what it was that they most needed. Time and time again they spoke of simple skills, especially language skills, without which they struggled to get by. But delivering education in the camps was far from straightforward. People who have crossed deserts and seas are still in flight and fight mode and feel that they need to keep going. They are suffering from trauma and so it was clear from Darren and Kate’s observations that a traditional approach to education was not going to work. As Darren explains,

“education in the UK is predicated on the idea that the same group of people will turn up on the same day, at the same time, with the same prior knowledge, to learn the same things. That absolutely does not work in the camp environment. If you set up a classroom, you have no idea who’s going to turn up from one day to the next, and even if people turn up, there’s no guarantee that they’re going to stay – there are food queues to join and lorries to catch to the next country. They are suffering from trauma and need a safe space."

The Refugee Rights Data Project showed that “61.1% of minors surveyed in the camp said that they “never feel safe” and 18.6% “do not feel very safe”. When a person feels unsafe the survival centres of the brain are activated, taking the pre-frontal cortex offline. It therefore becomes very difficult to learn and make new relationships. The teacher needs to understand how to overcome this, or learning simply doesn’t happen”.

What Crisis Classroom does, with pop-up tent-like classrooms, is to create an environment that is open and invitational – you don’t have to be there at the very start of a lesson and you don’t have to stay. Learning is open and flexible or as Darren describes it “a patchwork not a ladder”. Every bit of the education they offer is an experience in itself, but if you do come back the next day, you can build on it. 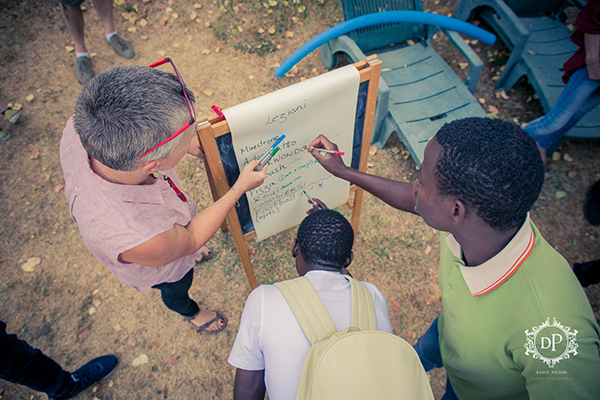 The education that is offered has a unique set of principles. It is crucial that it provides a safe space, and therefore, volunteer teachers are trained about trauma and how to create a welcoming environment for learning. It responds to basic needs and develops future skills by sharing the unique experiences and expertise of the group. For example, in one class, the group may start by learning to cook a basic French meal led by a French cook, learning language as they go e.g. “here’s a potato, now I’m peeling the potato”, and then in the following class a refugee learner may take over and share a recipe from their own culture. There have been huge successes: one of the first ever Crisis Classroom students, Omer, went on to reach a level of French that enabled him to become a French teacher for refugees arriving in camp. 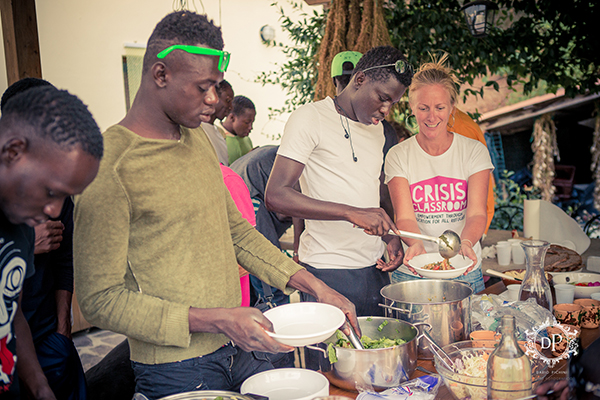 Just as Cities of Reciprocity noted that refugee communities have much to offer, Darren and Kate recognise that the answer is in the room. Over a quarter of the population in the Calais camp were educated at Bachelor’s, Masters or PhD level, and among the rest of the population, there was a wider range of professional skills and trade skills to bring to the fore from furniture making to dance. While the core members of the team are experienced teachers, they increasingly drew in volunteers and members of the refugee population with other skills to share, realising that they were “the holders of the room and the facilitators of learning, not the ones with all the answers”. If you’re a refugee, and you’re being given charity all the time, it can be dehumanising. Just like anyone else, they want to offer hospitality, share their language and culture, and their skills.

Since the camp was cleared, Darren and Kate have turned their attention to the key cities around Europe where refugee populations are settling. In Brighton, they have been able to draw together a wide range of stakeholders to support the unaccompanied minors arriving there: social workers, foster carers, arts organisations, teachers and school leaders, health organisations and local businesses. They are training corporate volunteers to be able to pick up their pop-up classrooms and resources and take them to other recipient cities across Europe, particularly around Italy and Greece. They are also working with Cambridge English to set up a MOOC (mass open online course) on teaching English to refugees (going live on 4 September), and with the support of a Catalyst grant from the RSA, they will be able to create online resources to make their training available in different languages so Crisis Classroom can spread around the world.

But Darren explains that the RSA has offered him much more than a grant. The Cities of Reciprocity report talks about the important role that “global connectors” like the RSA could play in supporting transient communities. Darren sees the key role of the RSA as getting people to look up from their work to see the bigger picture, be inspired by others and spark new ideas. He’s excited to connect with Fellows across the globe to take Crisis Classroom to new cities, and to see the RSA space renovated in 2018-19 to be a place where fellows can come together to do “intellectual hackathons and solve issues together”.  We can’t wait to see where Crisis Classroom goes next.

If you are a Fellow with a project that aligns with one of the three key themes of RSA work, as this project does to the Creative Learning and Development theme, find out more about how an RSA Catalyst Award could support your project here

Crisis Classroom’s new website goes live in September. You will be able to access it here: www.crisisclassroom.org