The RSA and the Institute for Innovation and Public Purpose (IIPP) at UCL co-hosted an exclusive retreat session at European Forum Alpbach’s Political Symposium in August 2017. The session enabled a group of city level policy makers and international stakeholders to engage with Professor Mazzucato’s world-renowned expertise in mission-driven policymaking to explore how it applies in practice using real world case studies. 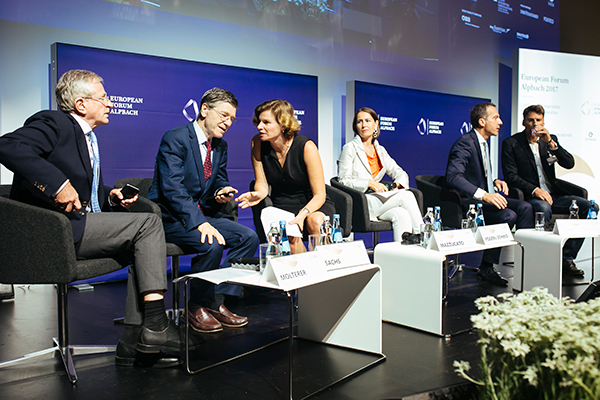 Governments across the world are facing a great challenge. On the one hand there is continued talk about austerity and the need to cut deficits. On the other the need for smart, inclusive, and sustainable growth.  But are these objectives – deficit reduction and challenge-driven investments – compatible?

Mission-oriented innovation policy confronts this question head on. It recognises that growth has not only a rate, but also a direction. It accepts that while investments might impact on deficits and be costly in the short term, the long term pay off – in terms of economic growth and reduced debt/GDP rations for decades to come – is well worth the investment, and the patience involved.

Tackling the grand challenges of today – whether it’s climate change, improving public health or adjusting to demographic change – will not be achieved via the narrow, sector-based approaches of the past, but by the ambitious, cross-sectoral, goal-oriented approach that helped put a man on the moon, and enabled Germany to transition to renewable energy via the Energiewende programme.

Rather than handing out tax incentives to businesses (which is rarely invested in R&D and which often just encourage inertia) mission oriented innovation policy seeks to incentivise system-wide transformation via dynamic partnerships between different sectors and actors.

A well-orchestrated, ambitious mission-oriented approach can not only bring about societal change, it can also reinvigorate and refocus the individual sectors involved: the German steel industry’s involvement in the repurposing, reuse and recycling aspects of the Energiewende programme, for example, enabled it to significantly lower its costs and material content.

We need progress across a number of fronts to realise the potential of mission orientated innovation policy. But policy-making narratives remain trapped in a ‘market-fixing’ mentality and still fail to recognise the role of the state in creating and shaping markets.

Markets themselves are outcomes of the interactions between both public and private actors, as well as actors from the third sector and from civil society.

This limited understanding of the state’s role flows through to inadequate methods of assessing a policy’s economic impacts. A mission-oriented framework requires continuous and dynamic monitoring and evaluation throughout the innovation policy process, in contrast to the market failure framework of static ‘before and after’ cost-benefit analyses.

Another consequence of failing to understand the dynamic between public and private sectors in driving innovation is that risks and rewards are misaligned. If the public sector compensates for the lack of private venture capital money going to early-stage innovation, it should be able to benefit from the wins, just as private investors do.

Changing the discourse around wealth creation is key to this process. Public and private can form visions of what is to be created together, and how to divide both the risks and the rewards of the value that results. But the process requires public agencies to embrace risk and uncertainty, build explorative capacity and foster institutional learning. It is not mistakes that are to be feared but that lack of learning from them.

To fulfil a mission, a country requires an entrepreneurial state.

This concept encapsulates the risk-taking role adopted by the state in the few countries that have managed to achieve innovation-led growth.

It is not the size of the budget but how it is invested. It is not government vs market, but the organisational capacity inside both the public and private sectors. We must abandon ideology and embrace opportunities that are calling to drive investment led growth and the challenges facing the 21st century.