Britain’s tradition of district nursing sets a great example to the world – in fact, it was one of the inspirations behind my own decision to become a nurse 30 years ago, having graduated as an economist. Yet every time I visit Britain I am told that neglect of community services is threatening the very survival of the country’s proudest creation, the National Health Service, because of the growing pressure on GPs and hospitals.

We had similar problems in the Netherlands a decade ago, and I’m glad to say that our success in tackling them has set an example that more and more nurses and caregivers in Britain and worldwide are now following. I’ve never regretted finding my true vocation, but by 2006 I had realised that the imposition of ‘new public management’ was strangling the profession and driving more and more nurses away. So, with three friends, I decided to do something about it. We formed a self-organised team to provide care to people in their own homes in the way our craft and values demanded.

We called it Buurtzorg – the English translation is Neighbourhood Care – and from that one team of four we have grown to more than 10,000 nurses in nearly 1,000 self-organised teams today. In addition, we are applying the same basic principles in mental health, youth and family support and other services, so that Buurtzorg social enterprises now have more than 14,000 employees supported by a back office of just 50.

People keep asking me for the secret of our success, and the truth is it’s simple. It’s all about starting from the perspective of the person needing care and support, and enabling and supporting caregivers to do their jobs with professionalism, vocational commitment and common sense.

I am delighted that more and more nurses and other caregivers in Britain are following our example – so much so that in December, at RSA House in London, I helped launch Buurtzorg Britain & Ireland. For the last couple of years, working in partnership with the social enterprise Public World, we have been supporting nurses and support workers, and their employers, to apply the lessons of our experience in the NHS and social care all over England and Scotland. It is still early days, but the signs are promising, as shown by an independent evaluation of the neighbourhood nursing teams in the London boroughs of Lambeth and Southwark published last month. 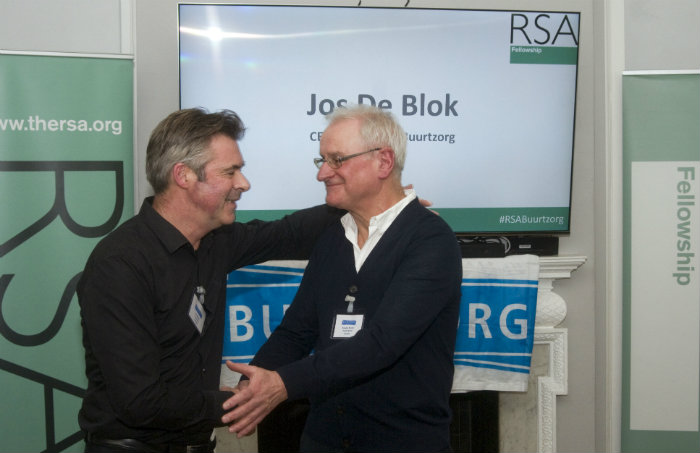 Different countries have somewhat different systems, but the basic problems in Britain are the same as those we set out to tackle a decade ago: top-down command and control instead of professional freedom and responsibility; systems that are far more complex than they need to be; fragmented services instead of holistic care.

Our neighbourhood teams arrange all the care themselves, working with their clients, their social networks and when necessary other parts of the health and care system, to support independent wellbeing at home. We support them with regional coaches, an effective IT system they helped to design, and the small back office that takes care of administrative burdens, freeing nurses to nurse rather than telling them how to! The result is not only improved wellbeing for our clients and staff. The insurers through which Dutch health and social care is funded are happier too, because better care and lower overheads means less time and money wasted.

Buurtzorg is now supporting change in more than 25 countries worldwide – I am just back from working with our new partners in India. The environments vary and of course that means we need to be pragmatic about how our principles are applied. But the fundamentals are the same everywhere, expressed in the title of my lecture when I was honoured to receive the RSA Albert Medal in 2014: humanity above bureaucracy. We are very grateful for the RSA’s continuing support, and always glad to hear from Fellows who would like to lend their knowledge, skills and commitment to our efforts.

When my friends and I sat around my kitchen table and decided to take the plunge little over a decade ago we never imagined how fast we would grow in the Netherlands.

So who knows what could we all achieve together worldwide in the next ten years?

Jos de Blok is the founder and CEO of Buurtzorg Nederland. You can find him on Twitter on @josdeblok.