A new generation of citizen economists

What we call the economy and often assume to be universal and natural is in fact a description of a particular form of social organisation.

We’ve tried to show how this thing we call ‘the economy’, which often seems to play such a central role in our individual and collective lives, is actually a fairly recent invention. What we call the economy and often assume to be universal and natural is in fact a description of a particular form of social organisation. It is in this way that economics is the continuation of politics by other means.  The crucial point is that the economy always could have been and always can be something different. We need to decide what we want it to be through public discussion, but in order to have that discussion everyone must first understand the language of the debate.

We therefore propose the idea of the Citizen Economist, an individual who has the basic knowledge, confidence and interest to engage critically with economic discourse in politics, the news and their local communities. Citizen Economists are able to see the links between their individual circumstances and the operation of the economy on a systemic level. They are able to engage with economic statements and narratives made by politicians, economists and media commentators about the performance of the economy and the values and assumptions behind their arguments. A society of Citizen Economists is one in which individuals have more understanding and thus control over their circumstances. It is a society in which there are always alternatives and all of society plays an active role in proposing, debating, scrutinising them and ultimately deciding collectively and individually which paths to take.

Citizen Economics isn’t about gaining an elaborate knowledge of abstract theory it is about trying to make connections between people's’ lived experience and economic circumstances on one hand and the economy on a systemic level on the other. Understanding how changes in the economy influence changes to people’s cost of living, the education their children receive, how much they and the people who live in their area are paid is also, in our view, a far more accessible way in to economics than learning about arcane models and utility functions.

The knowledge we are trying to provide Citizen Economists is not that of certain rules and laws about how the economy works, which in our view are unknowable even for experts. Instead it is about different ways of understanding and engaging with narratives, theories and statistics which purport to describe the economy and formulating arguments about what we can do to make it function better. Joan Robinson, put it perfectly - if cynically - when she said “the purpose of studying economics is not to acquire a set of ready-made answers to economic questions, but to learn how to avoid being deceived by economists.”

When this is achieved then individuals and groups have greater agency to shape the economy through political action at different scales. By committing to building a society of Citizen Economists we put in place one of the preconditions for a functioning and effective democracy.

This is an edited extract of The Econocracy: on the perils of leaving economics to the experts by Joe Earle, Cahal Moran and Zach Ward Perkins published by Penguin. Available at: Penguin.co.uk/books.

Jonah Earle co-author of The Econocracy has been showing his support for the Citizens’ Economic Council documentary You, Me and the Economy which with the RSA’s support FRSA Paul Wyatt is running a Kickstarter campaign for. Joe believes film has the power to make the idea of a citizen economist “a few steps further towards making the impossible inevitable”

You can support Paul’s the campaign here:  http://kck.st/2FdYtTS 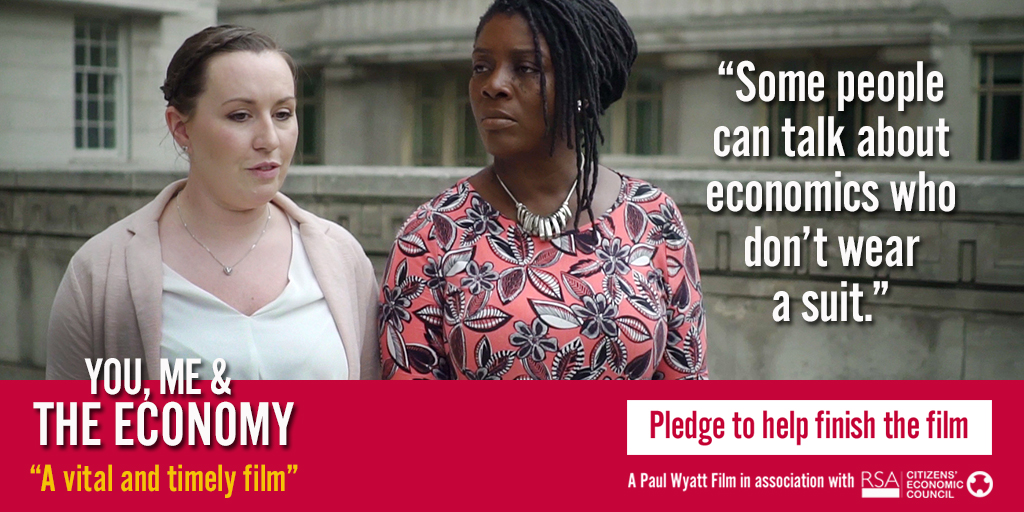