Petra Štefanková reflects on a collaborative drawing session she hosted at József Szinnyei Library in Komárno, Slovakia, with children aged 6 to 14. This event was hosted in conjunction with 92Y as part of the Seven Days of Genius Festival - a global festival celebrating the power of new ideas.

I received an offer from Ms. Renáta Filková, Director of József Szinnyei Library in Komárno, Slovakia, to lead a children's creative workshop. My first thought was to develop a session around the concept of collaboration with children through drawing.

Drawing is a part of visual communication, and its language is generally comprehensible for various groups of people. For children, expression through drawing is very natural, it is a way of exploring the world and testing their own abilities. It develops creativity, sensitivity, emotional world and fine motoring, but also seeing through images, imagination, and the ability to simplify complex intent into clear symbolism. It does not matter if the child later grows up to be a mathematician, a physicist, a programmer, or professional artist. They are able to remember this creative experience of collaborating through drawing at a very early age, and subconsciously return to the methods of cognition, recording, and interpretation that they discover experimentally in this way. 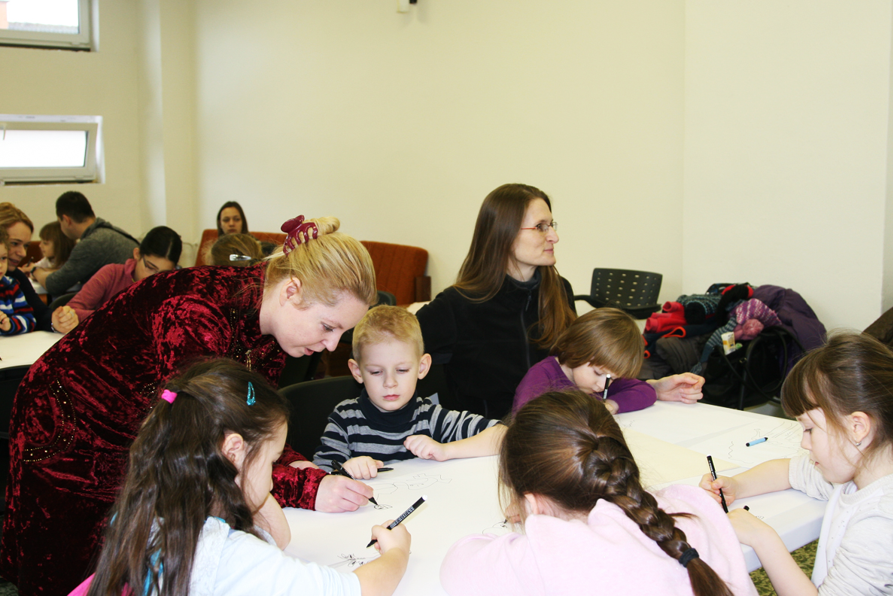 The workshop started by introducing my work as an illustrator of children's books published in Slovakia in 2016 and 2017. Then I did a simple drawing demonstration in my own style, actually in one of my many styles that I like to use as an illustrator and adapt to the occasion and the projects’ needs.

About 25 children aged 6 to 14 years were divided into small groups. Each group received one paper, a couple of black markers, and pencil crayons. The children learned to lead a line across the paper to simultaneously create patterns that continuously link to smaller or larger scenes and objects at certain points according to their own childhood imagination. The essence is that the line is not interrupted and thus always provides a new opportunity for another element. By drawing, the children learned logic and common interest in drawing a uniform image of a larger format using the simplest tool, a simple black marker.

The drawn line was to be connected across all parts of the chosen composition, whether it included people, animals, houses, entire cities, or other objects. And metaphorically, the drawing was also to illustrate the context of life and the need for interconnection of society, relationship making, and interaction. Finding common themes and contact points was the main inspiration. Finally, to not leave the picture black and white, the children got coloured crayons to give the work a colourful accent. 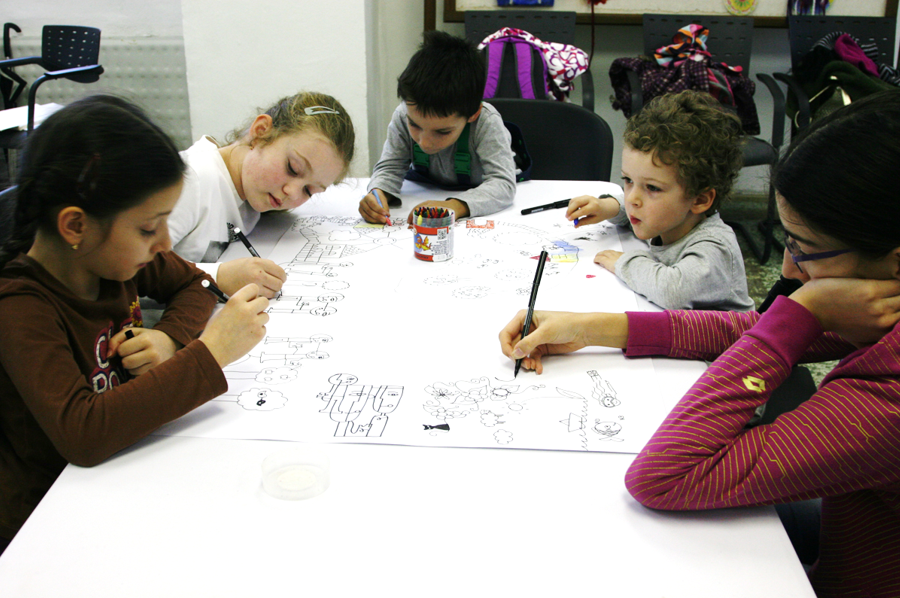 Present parents were also involved in the creative process and made positive comments regarding the result of the collaboration. They emphasized that Slovakia has long been lacking a similar authorial approach to the teaching of visual arts in today's technology-driven times.

I hope my brief input as an illustrator was as enriching for the children as I found collaborating and creating with them to be.