How film can make "the impossible inevitable"

"You, Me and the Economy" is a vital and timely documentary film tackling the exclusion of citizens' voices in economic decision making.

At the cinema a gentleman is trying to get my attention. He’s waving with one hand and performing a scissor-cutting mime with the other. We dismiss this as a consequence of beer being brought into the auditorium but later the gentleman will explain how he’d seen me introduce a half hour film called “The Survivor Sofa Story”.  Made in 2016 this film followed four designers on an RSA design residency looking for design solutions which could prevent household furniture waste ending up prematurely as landfill.  One insight in the film was about cutting off unsightly fire labels found on upholstered furniture. If you do that then by the time you’re ready to dispose of it charities and reuse organisations can’t legally take it off you.  You’ve most likely sentenced the furniture to death by landfill.  My new found friend at the cinema had told me that he and his partner would never (ever!) cut off a fire label again.

A small action, based on one insight in a film. But with the film having been seen at the Craft Council Film festival, screened around the world and on TV, the cumulative effect of hundreds of thousands of viewers doing the same thing is brilliant.

That’s the power of an RSA project on film, and the reason I’d like your help in making another one called “You, Me and the Economy”.

In 2017 I was back with the RSA for the Citizens’ Economic Council project which tackled the exclusion of citizens' voices in economic decision making.

The economy deeply affects our lives. From the money in our pockets, to the cost of our food to the funding of our public services and almost everything else we can imagine.

Strange, then, that as citizens we are excluded from the debates and decision making about this.

I was there to make a short video about the sessions. Unusually I did no research for this project, and this was important as I had to come at it without any “inside knowledge”. To connect with the participants, and earn their trust, I had to be experiencing the process with them. They were suspicious of the guy with the camera at first, but by the third session I was being offered food and invites to the pub.

I’ve had the good fortune to have interviewed dozens of people over the years, and I’ve come to realise that there’s no such thing as an “ordinary citizen”.  If you really want to understand “individuals on the street”, go and spend some time with them. Sit in their kitchens, front rooms or take a trip with them to their social club. Earn their trust, let them speak in their own way, and listen. If you give people that opportunity then the honesty and insight you’ll get back will highlight more of our similarities as people than our differences.

“You, Me and the Economy” features participants from different areas and backgrounds taking part in the Citizens’ Economic Council process. The end goal was for the group in Manchester and London to agree a set of values which they thought should be embedded in all future policy making.

The film illustrates the initial scepticism some felt towards the idea of taking part.  “Economy? Economist? I thought that was like watching paint dry” remarks participant in London Patricia Wharton. Surely there were better ways to spend a Saturday?  As the project continued over four months, what came through resoundingly was both groups shared compassion for others.

It was a journey not short of challenge but one which gave people the opportunity to express themselves and understand how important their lived experience was to discussions about the economy.

It intrigued me enough to want to find out what the real impact a process like this could have on a person's life away from the focus group setting.

So when the Citizens’ Economic Council project finished in June 2017…

“Transformative” is a word used to describe an experience which inspires change.  It’s bandied around a fair bit and sometimes used disingenuously as marketing speak, often to indicate a change which wasn’t that substantial.  Its correct meaning however is entirely appropriate to describe the impact of The Citizens’ Economic Council with some participants taking significant strides in using their new found economic voice at home, in their workplaces, community and local government.

One short film wouldn’t cut it for this story, as it needed the exposition which documentary affords to expand the narrative and tell what happened next.  It was a gamble though, as the money had run out for filming and there were no funds available to pay for post-production of a half hour film.

Jonah Earle, Co-author of The Econocracy

It’s for post-production costs that I’m running the Kickstarter campaign and I need your help with this. Not raising the money would consign all that filmed insight and experience to be forever trapped on external hard drives. Never to be shared, and never to inspire.

[the film] will delve deeper into how people can build this stronger understanding of their role in the economy, and encourage others to do the same, meaning the economy becomes something we are all a part of, rather than feel excluded from.

Through films like this the story of such successes can be spread in an incredibly personal and powerful way.

All voices count in the economy, and by pressing the pledge button on the Kickstarter page your help in supporting this film will show the power of these and the need to include them to influence the economy and the quality and legitimacy of policy making. I’m passionate about bringing this inspiring story to a bigger audience. As a filmmaker, doing this might not always be great for my own economy, but it certainly helps you meet interesting people during a night at the cinema.

With the RSA’s support Paul is running a Kickstarter campaign for “You, Me and the Economy”. Find out more about the campaign and how you can help. 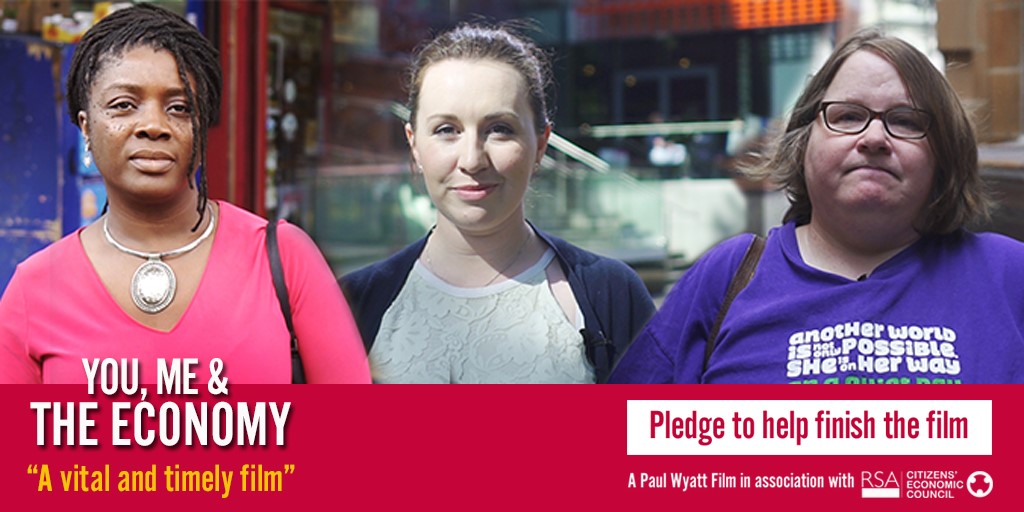 Paul Wyatt is a self-producing filmmaker and media consultant.