A sustainable NHS: start with the workforce

When it comes to workforce health improvement, the NHS currently underperforms compared to the rest of the public sector. Against this background and the controversial comments from the Chief Inspector of Hospitals that the NHS is “not fit for the 21st century”, we have seen traditional methods of workplace health improvement fail to tackle underlining and deep inequalities between different workers within the service. The Royal Free NHS Foundation Trust is taking on this challenge.

In early 2016, Simon Stevens, chief executive of NHS England, announced a major drive to improve the health and wellbeing of NHS staff. With 1.2 million staff, the NHS is the largest employer in the UK.

This commitment was made to ensure the NHS as an employer sets a national example in the support it offers its own staff to stay healthy. The costs of work-related ill-health for the NHS are significant. In 2015 Public Health England estimated the total cost of sickness absence among NHS staff at £2.4bn. Per employee, the costs are 27% higher than the UK public sector average, and 46% higher than the average for all sectors.

The research is clear, good work is of fundamental importance when it comes to health. The systemic review "Is work good for your health and wellbeing?" published in 2006 concluded that work was good for both physical and mental health and wellbeing with unemployment correlating with a range of physical and mental illnesses. Subsequent reviews by Dame Carol Black have encouraged labour market policy to focus on improving work conditions and accelerate returning to work after poor health.

Workforce-led change in the NHS

In recent years, workforce issues in the NHS have come to prominence. Particuarly in the debates over pay, public servants have increasingly publicised their day-to-day struggles delivering on the front line.

Indeed, while work is better for your health than unemployment, for many work takes a toll on health and well-being. A recent poll commissioned by the London Assembly found that 1 in 10 workers in London come home feeling exhausted every day and 1 in 4 workers report that their work contributes to headaches and backache at least once a month. Most shockingly, and most pertinently for the NHS, it found that 1 in 4 have hidden an illness from their employer, rising to 50% of those with a current health condition. This correlates to its findings that London’s workers are twice as likely to feel confident to go to their manager for support for a health condition if they are in social grades D/E (highest grade) as compared to A/B (lower grade); with lower paid staff far more likely to go to a GP in the first instance for support.

Employers like the Royal Free London NHS Foundation Trust (taking in Chase Farm and Barnet Hospitals) takes seriously its role as a major employer and ‘anchor’ institution, employing over 10,000 people across North London.

Like other NHS bodies, the Trust is at sharp end of these developments and sees a high and growing proportion of its resources directed towards problems that early intervention could have prevented.

Working under the Health as a Social Movement programme, the RSA have witnessed how workforce led change can be a powerful route to achieve the ambition laid out by Simon Stevens.

What is The Royal Free London NHS Foundation Trust doing? 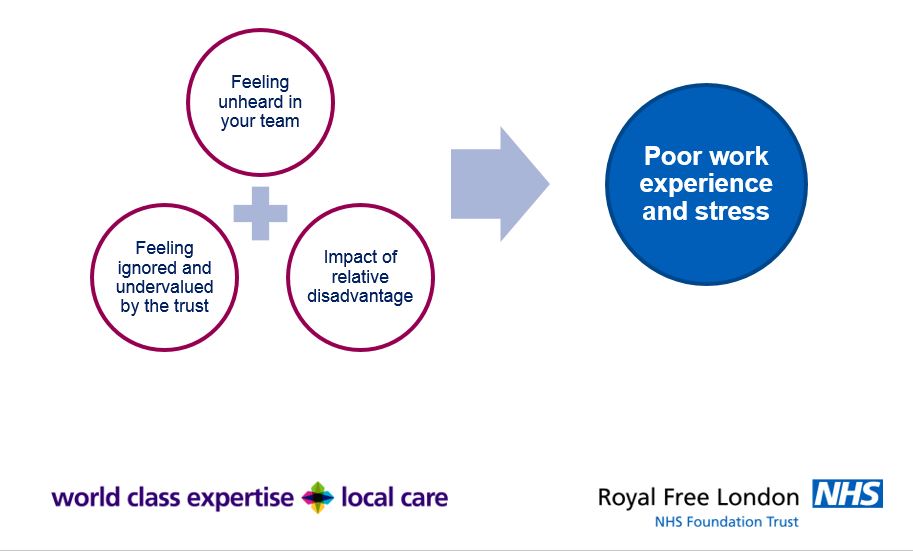 Supported with funding by NHS England and support from the RSA and the New Economics Foundation the Trust targeted improving the health of their lowest paid staff. The key components of the project were to target a group of 400 staff across four teams: Domestics, Porters, Security, Facilities admin & clerical team. Managers engaged staff through interviews to find out more about what they were interested in, and developed an offer which included free financial literacy workshops, healthy cooking classes, a weekly walking programme and a trek to Mount Snowdon.

This wasn’t the first Trust-wide occupational health initiative. Prior to joining the programme in early 2016, the Trust was running a health and wellbeing programme called ‘Fit At The Free’ for staff. However, they identified that this was predominantly used by staff in higher pay grades, with the cycle to work scheme having 91% take up by bands 7 and above, whilst only 10% of staff from bands 1-2 taking part.

Inequalities within and between NHS staff are exacerbated in London due to high costs of living, especially availability of affordable housing. This also contributes to a higher than average proportion of workers trained in London subsequently choosing to move away.

What are the project findings?

After two years on the programme, the modest investment has reaped huge rewards

Simon Stevens’ vision for the NHS workforce to become a leading exemplar to the rest of the nation is a challenging task; but by maintaining a sharp focus on reducing inequalities with the energy and commitment that has characterised the Royal Free London's approach, we all can learn to start with workforce to help achieve a preventative and sustainable health and care system.