People are not saving enough for retirement. Meanwhile the current system of tax relief offers special perks for higher earners. We’ve crunched the numbers to show how a fairer system would boost the retirement security of 3 in 4 workers.

A backdrop of no or low pension saving

Auto-enrolment has widely been heralded as a success. Now more employees than ever are contributing to their workplace pension scheme. But default contribution levels were initially set so low that many have been under saving. This has motivated the Government to make changes to the system and there will soon be a substantial increase in the minimum required contributions, which will rise to 8% of earnings in 2019.

But the problem of under saving is even more acute for the self-employed. Just 17% contributed to a pension in 2015/16, compared to 62% of employees. And as many as 45% have no pension wealth whatsoever.

Under the current system people can claim pension tax relief at their marginal rate of income tax. For example, a basic rate taxpayer (earning less than £46,350), can claim 20% tax relief on their contributions. Somewhat counterintuitively, this does not mean that they get a 20% bonus on what they pay in. Rather it means that for every 80p they would otherwise receive in taxed income, they can divert £1 into a pension and avoid paying income tax on that £1. Framed differently, for every £1 they contribute to a pension, they receive 25p from the Government in tax relief – a 25% matching contribution.

Because this system is pegged to the marginal rate of income tax, higher and additional rate taxpayers can claim more tax relief on equivalent contributions. Higher rate taxpayers receive tax relief at 40%. For every 60p they would otherwise receive in taxed income, they can divert £1 to a pension and avoid paying income tax on that £1. So for every £1 they contribute, they receive 67p from the Government – a 67% matching contribution.

However, under a 30% flat rate, tax relief is distributed equally, according to how much people contribute. Basic rate taxpayers, self-employed people and employees alike, stand to gain significantly from these changes. A worker earning £20,000 and contributing 5% of their income to a pension would see their annual tax relief climb from £250 to £430.

Those not currently contributing would have greater incentive to start. And while tax relief will remain difficult to understand – framing this benefit as a bonus could improve its effectiveness. For all workers are now essentially getting a buy two get one free deal on pension contributions. 70p buys £1, £1 buys £1.43 and £2 buys £2.86 – a 43% matching contribution. 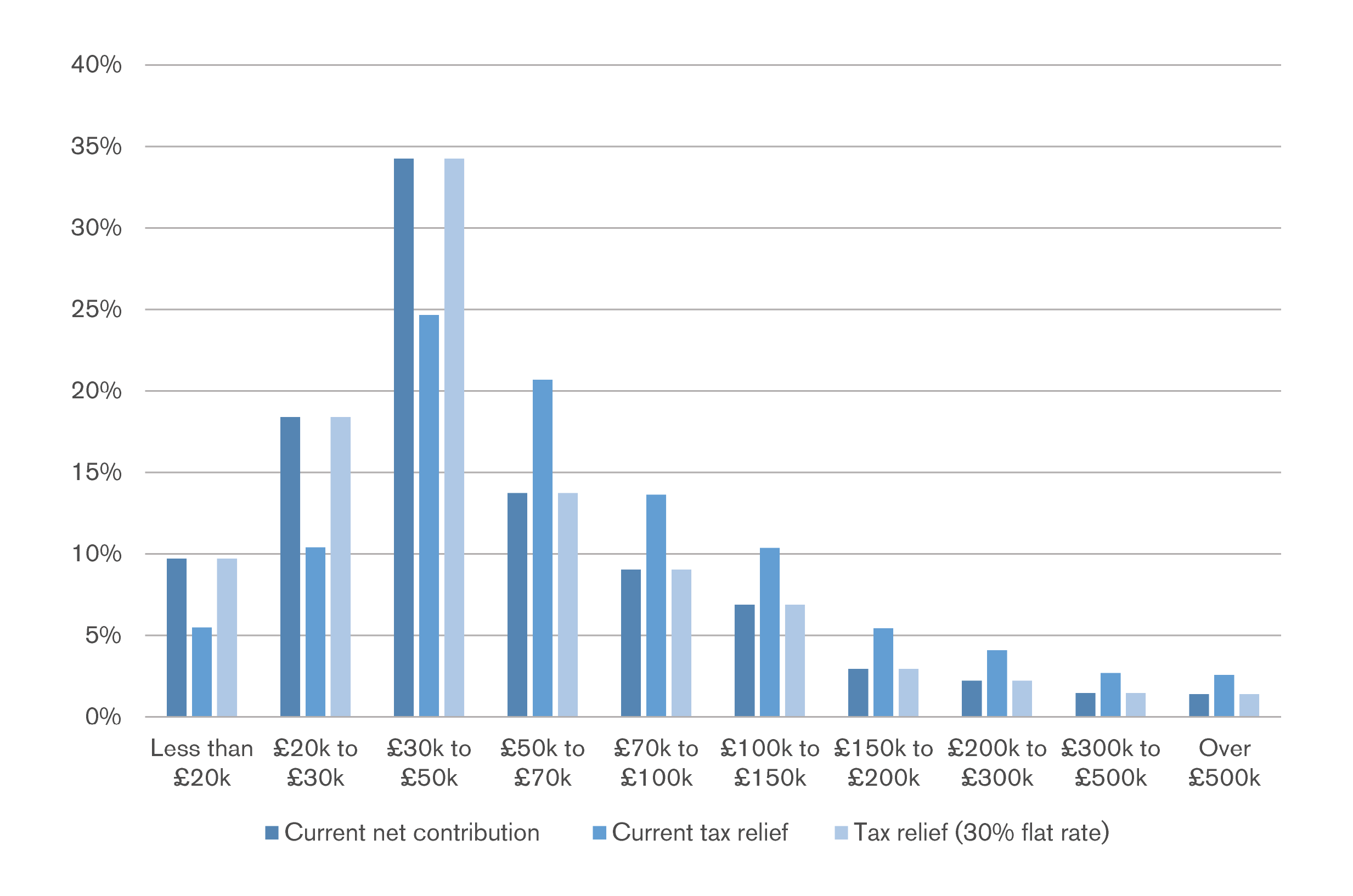 A worker earning £60,000 and contributing 5% of their income to a pension would see their tax relief fall from £2,010 to £1,290. But the perk of a bigger bonus from the Government was arbitrary, was it not?

One justification for the current system of tax relief points to the tax treatment of pension funds. In the UK pensions are EET – except, exempt, taxed – this means contributions are not taxed, investment gains are not taxed but pension income is taxed in a way similar to a person’s salary. If the sum of their annual state pension entitlement (currently £8,300) and private pension income exceeds the personal allowance, they will pay income tax on it at the marginal rate.

The theory is that higher earners will pay higher rates of income tax in retirement when they come to drawdown on their pension. And if they only receive 30% tax relief when they pay in but are charged 40% when they cash out, they will face additional charges which makes the pension system no longer tax efficient and could discourage saving.

This does start to become more of a problem for people with pots approaching £1m. But can millionaires really complain about their pension no longer being tax efficient once it reaches this size?

What about the cost?

Is a single tax bonus tolerable to the exchequer? The answer is yes. According to our calculations, these changes would have been revenue neutral in 2015/16 when nearly £31bn was spent on pension tax relief. A 30% flat rate would have resulted in marginal savings (less than £1bn).

But what about all of those people who are currently under saving for retirement, will the cost not go up once they start to pay into a pension and/or increase their contributions? The answer is yes. However we have put forward a range of options to mitigate this, including reducing the annual allowance and changes to employer NICs rebate. There are also thorny technical issues relating to how this fits with defined benefit pension schemes. These are explained in our report, where we ultimately recommend that the Government should commission an independent review to explore if and how this reform could be established.