New research from consumer group Which? highlights the alarming rate of bank branch closures in the UK over the past three years, with around 60 branches shutting their doors each month. At the RSA we are supporting the Community Savings Bank Association (CSBA) to create a UK-wide network of customer-owned, regional banks that have local branches at the core of their model. As part of our event series promoting this work across the South West, we heard how one community came together in response to the planned closure of their high street banks. 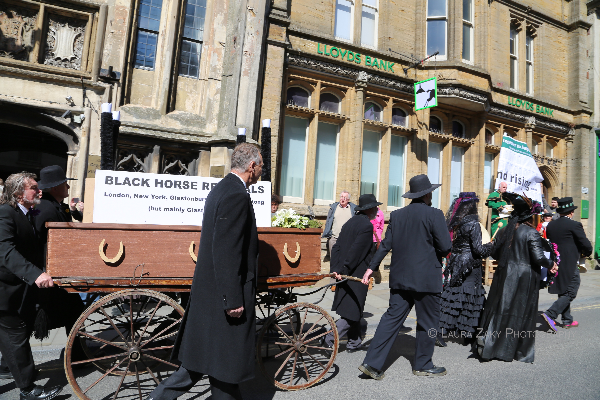 In 2015, Barclays, HSBC, and Lloyds, the three high street banks in Glastonbury announced that they were going to close.  This prompted several local businesses to form the Last Bank Standing Campaign to highlight the situation, to raise awareness with other communities (if it could happen to a town that receives 750,000 visitors a year, it could happen anywhere), and to ensure that the town still had access to banking services. This is the story of the campaign.

After a public meeting in December 2015, the first event to be arranged was singing a campaign version of Blake’s poem “Jerusalem”, which has strong connections to the town. Its 128 syllables and rhyming couplets meant it had the ideal metre and structure to shoehorn our message in.  The flash-mob choir of several hundred people was conducted by Charles Hazlewood and took over the whole of the Market Cross area. The performance was filmed by regional news, and mentioned on BBC Breakfast.

Supporting us that day was our local MP, James Heappey, who later raised the question of Bank Closures at PMQs in the House of Commons.  He also spoke about the problems facing rural communities when banks close at a meeting of the Select Committee on Access to Banking.  When the banks announced they were closing, they  issued impact assessments which stated that customers could use the Post Office as an alternative, yet  banks do not give the Post Offices access to their network so customers end up with a second rate service.  There was also no agreement in place with the Post Office to deliver services to business customers who were faced with treks to neighbouring towns to “bank”.  Personal customers were steered towards using online banking, yet 30% of their customers do not do this, the elderly and disadvantaged being the worst affected.

The second project the campaign team organised was the production of a spaghetti western movie filmed in Glastonbury in early February. Crazy Horse had a supporting crowd of several hundred residents, two cacti, a set of saloon bar doors, a pantomime black horse, and a deputy (who happened to be the Deputy Mayor at the time). Parallel with this the team ran a town wide petition to try and save one bank.  Within three weeks 5,000 signatures had been gathered.  The resulting petitions were scanned to create a vibrant 5 x 2m vinyl banner that was displayed against the bank for the benefit of the press and media.

Barclays closed in March 2016 and was given a fitting send-off by the town, with belly-dancers, drummers, the Town Crier and an impassioned speech by the Mayor.  ITV featured the story on their West Country news bulletin. With only one bank left open, Lloyds quickly became the focus of attention for the next phase of the campaign.

Lloyds were the final bank to close in April 2016 and ended a historic link with the town. To mark the occasion a coffin was constructed with four black horse legs sticking out of the top and the words ‘Black Horse Removals’ emblazoned on the side. The Town Council lent the campaign their Victorian bier to carry it and everyone dressed up for the occasion. The funeral procession was timed so the cortege arrived outside the bank at 2pm - the moment it finally closed its doors to the public.  Before Lloyds took over, the bank was originally Fox, Fowler and Co; the last commercial bank in England to issue their own banknotes.

We knew that no bank had ever changed its mind on closing one of its branches for fear of setting a precedent, so realistically we knew that it would be unlikely that they would stay. We therefore made great play of the words of their Chairman and Chief Executive on their claims about helping communities; work by the New Economics Foundation has shown that the last bank closing has a detrimental effect on a town’s economy.

Over the course of the campaign there was a noticeable change of attitude in the town. When the first bank announced its closure, there was a feeling that the town was sorry to see them go and wished them to stay. By the time the last bank left however, the view was more like “good riddance”. This was due to customers being treated with disdain, twisted statistics making out that there was no demand for a bank, and claims that closure would not cause any inconvenience to customers. The last bank to leave made annual profits of £4,200 million and had Chief Executive earning over £8 million per annum yet they were unable to support the continued operation of a branch in Glastonbury. While the branch wasn’t losing money, closure was about opportunity cost; the bank could make more money by investing elsewhere. In summary, the banks had lost touch with the community.

We knew there was a strong desire for banking services in the town and the campaign team were speaking to other financial institutions about filling the void.  In November 2016 Nationwide Building Society announced that they would open a branch in 2017. In their initial discussions, Nationwide disclosed that they needed 300 customers to make it worthwhile. After their first consultation they had over 1200 people pledging to open accounts and when they opened they had to take on additional staff to cope with the opening of new accounts.

The campaign was very successful, with regular regional TV coverage, articles in the national press, interviews on BBC Radio 4, and mentions in the House of Commons. In September 2016, Kevin Redpath shared the campaign story at an RSA meeting in Frome on 21st Century Prosperity.. The campaign raised the profile of the town. What did we learn from our campaign that we could pass onto other communities facing a similar situation?

If you would like to know more about the campaign, please get in touch with Kevin Redpath FRSA at [email protected]

The RSA is supporting the Community Savings Bank Association to create a UK-wide network of customer-owned, regional banks to serve the everyday financial needs of ordinary people, local community groups, and small and medium sized companies. If you would like to know more about this work and how you can get involved, please register your details below or get in touch with Mark Hall, RSA Deputy Head of Engagement, [email protected]