A bike-eyed view of Angus

The second week of my fortnight in Scotland on the UK-wide bicycle tour began by heading east to the Angus region through the Cairngorms National Park, passing dormant ski centres, managed grouse moors and extensive tracts of planted woodland. After crossing the Highland Boundary Fault, which sandwiches the Cairngorms between the Great Glen Fault to the west, I cycled into a very different landscape. Verdant patchworks of fields replaced the grazed hills of the Highlands: I had moved out of Less Favoured Area land and into the highly productive and more populated lowlands.

My first stop was Arbroath, famed for its hot smoked haddock Smokies. The land was specked white with rows of polytunnels growing soft fruit. A quarter of all Scottish soft fruit is grown in Angus. Local residents told me the polytunnels are a recent addition to the landscape, appearing in the last 10-15 years. I met James, a fruit farmer and part of a co-operative of growers who have invested heavily in technology: “strawberries have been £2 a punnet for the last 20 years, we’ve had to get more and more efficient to beat inflation and keep prices the same.”

Polytunnels and climate-controlled irrigation have extended the strawberry growing season from five weeks 20 years ago to five months at present, with yields increasing from 50-60 tonnes to over 700 tonnes. Innovating and investing in new technologies is key to the success of these farms - keeping yields high, quality high and prices low. The provision of the population with fresh fruit in an area where access to healthy food is poor was a source of pride for these farmers, and despite uncertainty with future EU innovation funding and a labour shortage, they were confident that they would continue to find new ways to keep prices low. 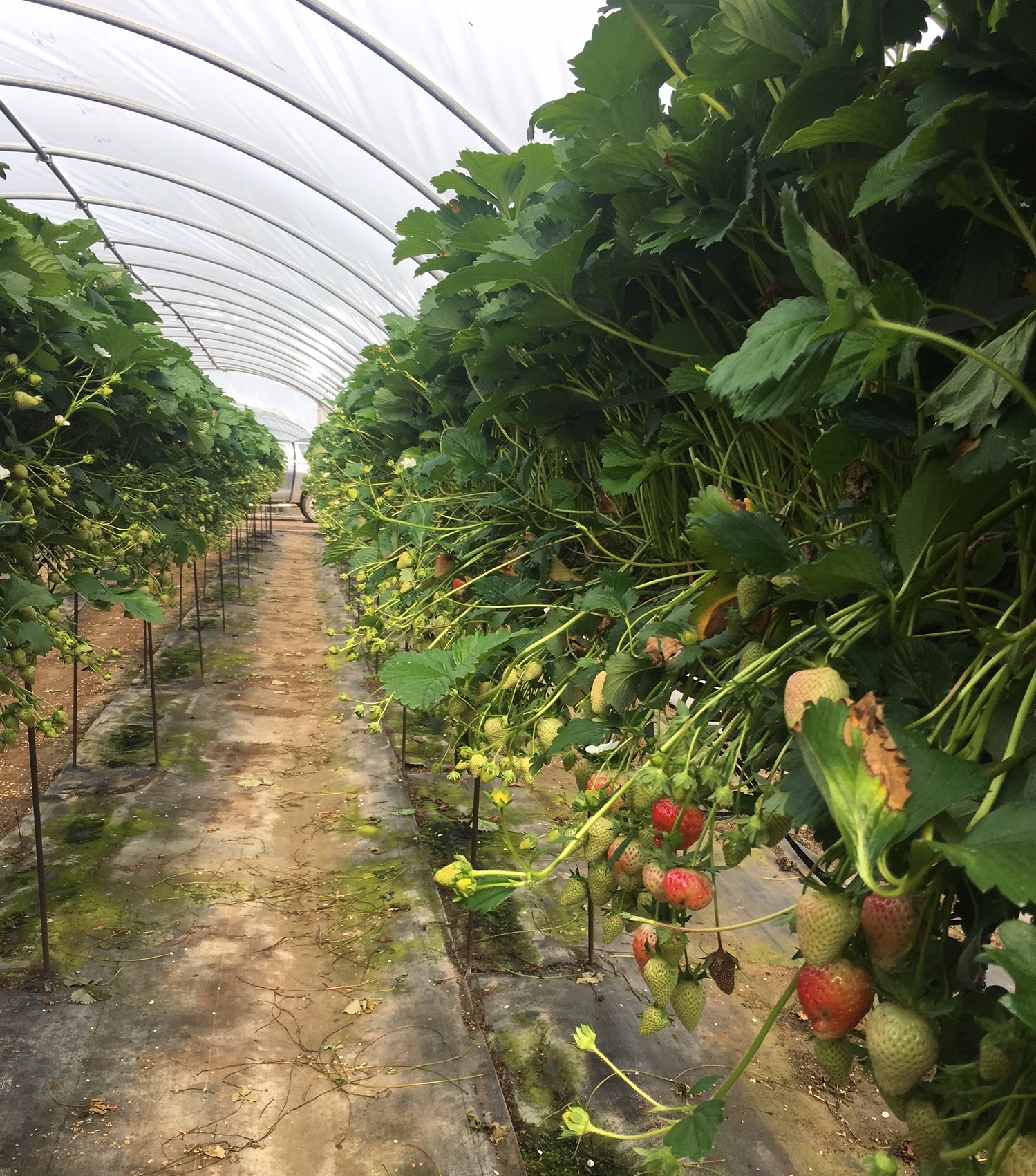 Seasonal working migrants are a crucial part of the UK agricultural industry. During peak season it is estimated that the sector is dependent on a temporary workforce of around 75,000 people, of which 98% are EU nationals. Picking soft fruit is labour intensive and so farmers like James are vulnerable to changes in the labour market. He told me, “the weaker pound post-referendum means people are going to Germany and France instead – the main attraction to the UK was the strong currency.”  The recent introduction of a minimum agricultural wage in Germany at the same level as wages in the UK compounds the problem. “Why would people from Eastern European countries travel to the UK when they now get the same wages in Germany and can travel home at weekends to see their families” added Sandy, manager at a potato and daffodil growers co-operative. Both growers reported a 10-15% shortfall in seasonal labour at the end of last year. How long will farmers with tight margins be able to afford the significant dent in profits from unpicked crops? A reintroduction of a Seasonal Agricultural Workers Scheme similar to the one which closed in 2013 could ease the labour pressures on the farmers I spoke to in Angus, but the government will have to move quickly to ensure that the political schedule is in tune with the seasons to avoid a huge wastage of food at the end of this year.

Funding. Rural Scotland benefits from EU funding streams supporting a range of activities across the rural economy, society and environment in development, social inclusion and environmental protection. Something that was very clear during my time in Scotland was the huge amount of European money that has been spent on agricultural and rural development: LEADER funding for agroforestry and an on-site butchery in Ullapool; environmental summits in East Haven and Geoparks in Achiltibuie; Scotland Rural Development Funding for new warehouses and facilities in Montrose; and match funding for innovation and tech improvements in Arbroath. Concern for how these funding streams would be replaced post-Brexit was palpable. Will they be reallocated? Will the Scottish Government match EU funding? Will access be the same? Will they disappear completely?

I spoke to Dave, LEADER Manager at Angus Council, about the future of the programme, which supports local, community-led development. The next funding cycle ends in 2020 and there’s been no talk of a continuation of the funding post-Brexit. Staff members are preparing for redundancy after the cycle ends are already looking ahead and planning their next career move. When discussing what a future Scottish funding system could look like, Dave added, “there’s been a drive toward regionalisation in Angus, which forces councils to have big strategic projects that link with each other. I expect the different branches of development funding will be lumped in to one pot.” If disparate funding streams are tied up in a single, larger pot of cash with a focus on more urban projects, rather than having a ‘local’ mandate, this could have hard-hitting effects on rural communities.

My previous week in the Highlands was defined by a strong sense of identity and community, forged through the harshness of the land and the remoteness of life - crofters helping crofters and residents in small, isolated villages running public services. The more populated, urban countryside and larger-scale agriculture in Angus unsurprisingly fostered less of the need to share equipment and services. The sense I got from cycling around the region was that the scale of community was different here; it was less visible at first, but very much alive under the surface.

I met with the East Haven Together community group, who created a strategy to encourage resident participation and sustainability through small but impactful local projects. Wendy told me that before the strategy, “residents on the same road didn’t really know each other and there was a disconnect between farmers and people living alongside agricultural land.” Successful crowd-funding projects, community consultations and environmental protection strategies nurtured a sense of pride, place and inclusivity. Discourse opened up between farmers and residents to work through environmental problems, “the waste run off from a couple of the local farms used to be really damaging to the dune system in East Haven, but we’ve worked with them to alter practices and reduce impact.” Through effective and inclusive community action, East Haven has seen an increase in participation, visitor numbers and won numerous awards. I left the village thinking about how fostering a sense of identity, much like the reintroduction of the Gaelic medium in the Highlands, can be a strong grassroots developmental tool in rural communities.

Agriculture is a global business in Angus. Daffodils are exported to the US, seed potatoes to Africa, the Middle East and Asia and lamb, beef and soft fruit across Europe. Post-Brexit uncertainty about future trade deals and potential tariffs dominated many conversations. A worker at a potato and daffodil co-op called for clarity on the detail: “What will be the process of selling to Europe once we leave? Phytocertificate? Plant passport? And what is happening to plant breeders rights?” Yet, despite this uncertainty, farmers and producers were looking forward and forging new business partnerships and trade links; selling produce to different UK markets or new markets abroad. Resilience to shock and drive to carry on producing high quality food ran deep in Angus, with the sense of pride and ambition for future improvements overriding looming uncertainties.