RSA JFN: Immune to failure - learning to thrive in the age of uncertainty

On 10th July 2018, the RSA Japan Fellows’ Network (RSA JFN) had the pleasure to welcome a distinguished guest, Alexandra Krawiec, at STOCK Takanawa in Minato-ku, Tokyo, for a lecture and debate about how to deal with uncertainty and stress in our modern age.

14 fellows and 24 guests attended the event, including university students who also had the opportunity to learn more about the RSA and the coming activities of RSA JFN. Alex is not only a scholar and the creator of several science-related documentaries, but also the Polish Connector of the RSA. The main message of her talk was the importance of creating meaning in our lives. Meaning gives us strength because regardless of what happens around us, we have the freedom of using our mind and deciding how to perceive and react to events. After the lecture, small groups were formed and a discussion followed on the ways each of us had dealt with failure or uncertainty, what could be the best ways to do so in the future and how Alex’s suggestions could lead to personal changes. 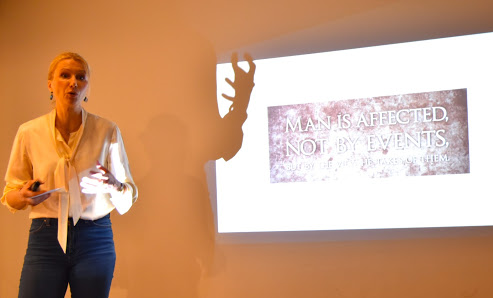 Alex began her talk by pointing out that mankind has been contemplating failure and decision-making since ancient times. She introduced the 15th-century Macro Manuscript, drawing also on works by great figures of the Age of Reason and the Age of Enlightenment such as Thomas Hobbes and Jeremy Bentham. She suggested that failure, based on the interplay between pain and pleasure, could be defined as a state of mind when we experience a painful sense of loss. A “Sense” of loss implies a level of pain depending not only on the type of failure experienced, but also proportional to one’s own sensibility. Therefore, it is interesting to note that we are all differently equipped emotionally to deal with failure.

However, as Alex explained, human beings can find resources in their own minds to cope with uncertainty, as did the following two contemporary thinkers. Dietrich Bonhoeffer, a pastor and anti-Nazi militant who was hanged in a concentration camp asked himself the question “who am I?” at a time of great uncertainty and insecurity. Such self-reflection is, according to Alex, highly necessary, even today, when we are given the illusion of a choice but more often than not choose what society decides for us. Mentioning the focus put on STEM (Science, Technology, Engineering, and Mathematics) and economics as the ideal education path promoted nowadays, she warned us that if we neglected the study of philosophy and literature, we might be less inclined to ask ourselves vital existential questions and in the end be unable to deal with ethical ones involving for example artificial intelligence and robotics, or even our identity as human beings. Viktor Frankl was in a concentration camp like Dietrich Bonhoeffer, and like him reflected on how to deal with uncertainty. After observing how some prisoners, not necessary the strongest ones, survived, by finding meaning, he wrote Man’s search for meaning and proposed a therapy system to help people build meaning.  We find strength in meaning because regardless of what happens around us, we have the freedom of using our mind and decide how to perceive and react to events. This was a point emphasized by Alex.

Later on, Alex mentioned the works of Hobbes and Seneca and stoicism. She expressed some reserves as for the benefits of practicing a pessimistic philosophy and preparing ourselves every day for the worst, when it is possible that such thinking might play a role in making self-fulfilling prophecies happen!

Reminding us of the technological and environmental challenges we face in modern times, she also introduced the optimistic proposition of Steven Pinker, which many RSA fellows are familiar with, Steven Pinker having participated in RSA events where he introduced his analysis of various parameters such as a growing life expectancy and the eradication of devastating diseases. She advocated, however, a reasonable but more cautious approach, mentioning the example of Sir David Attenborough, whose optimism is tempered by his deep concern for the environment and the survival of human beings (Alex made a documentary untitled David Attenborough. Passion for Life.).

This could lead us to believe that finding meaning and using reason is the perfect recipe to deal with uncertainty and failure. Here, Alex warned us that humans behave irrationally and that we first need to understand and accept this reality. This observation lead in recent years the behavioral economist Richard Thaler to popularize the Nudge Theory, and suggest that instead of appealing to reason it would be preferable to gently alter behavior. This can be, and is, done on a large scale, but as individuals we can also use it by being more gentle with ourselves and see our failures from a different perspective, recognizing we are not the perfect thinkers we sometimes think we are.

Alex then gave us the example of a woman, Rikke Schmidt Kjærgaard, who, at the age of 38 was left paralyzed and unable to communicate, except by blinking, and wrote a book about her recovery: The blink of an eye.

She also mentioned Rosa Parks’ life as another example of a person finding meaning in her life and the courage to conquer fear.

On the opposite, addictions to opioids and the problem of hikikomori in Japan, for example, are symptoms of a growing sense of failure and uncertainty experienced by the individual in a context of enormous wage gaps, disconnection from nature, information overdose, overexposure to images of perfection in the media (including social media), surveillance by the authorities, etc., that contribute to our sense of inadequacy and powerlessness.

Given our limitations and the growing intrusion of technology in our lives, how, then, can we best deal with uncertainty and uncertain times?

Alex gave us some hints, mentioning the Solidarity movement in Poland and the necessity to collaborate instead of competing. More important, she said, we need to be brave and not be paralyzed by fear.

After the lecture, small groups were formed and a discussion followed on the ways each of us had dealt in his or her life with failure or uncertainty, what could be the best ways to do so in the future and how Alex’s suggestions could lead to personal changes. It appeared that for the participants, not being overly optimistic about future perspectives did not exclude adopting a very positive attitude. The lesson about the importance of finding meaning was well taken it seems. One conclusion in particular was that happiness depended more on internal factors than external ones. An echo of Alex’s proposition that we are free to use our mind and decide how to react to events, and a reminder that meaning and intrinsic motivation are not the same thing as purpose.

Looking at the examples shared by Alex of individuals who took risks, conquered fear and found meaning in their lives reminded me of a lecture she had given for TEDx on the Power of a Willing Mind when she mentioned our “intrinsic need for role models, we can aspire to, and whose ideas inspire us”. Although she did not specifically mention her previous lecture, I felt that our self-reflection in search of meaning advocated by Alex and conducted with the help of philosophy and literature, would therefore benefit greatly from exposure to such role models and thinkers, particularly those whose own self-reflection is the product of experiencing hardships and uncertainty. Montaigne encouraged us to "rub and polish our brains against other people's brains". I would suggest that the RSA is one such place where we can get exposed to fearless and innovative minds and find or reinforce meaning in our own life. I would also repeat in conclusion the words our Japan Connector Tania said when introducing Alex’s lecture: “taking risks and dealing with uncertainty can bring new opportunities”.