The Many Identities of the Uplands

Farming in Cumbria has seen its fair share of trials and tribulations. After foot and mouth in 2001, Cumbria didn’t go back to the way it was before. One local detailed how after the culling, a mindset had changed. He spoke of one farmer he knew, who walked around with a gun and shot each of his prize-winning Herdwick sheep because “it wasn’t right that it should be done by a stranger”.

Upland sheep have been bred over hundreds of years to be hardy and territorial, safely roaming the commons unfenced and unmanned. Each sheep has their preferred patch that they graze (their ‘heaf’) and this knowledge is passed down through to their lambs. At the Gathering, all the farmers, young and old, their dogs and quadbikes, combe the hills to bring down each one. “Farmers, sheep and dogs walk all over the hills in synchronicity, flowing down the valleys like water”, chimed Harriet Fraser poetically.

Amongst the commons, tenancies are given to farmers who may not be the best pick. From Isaac’s own experience, he claims “It takes a certain breed of person to farm the hills. The landscape picks you, you don’t pick it”. Each farmer that I met - with a grafted sense of pride - underlined that there needs to be dedication to the job, if not, negligent maintenance of flocks and infrastructure has a consequence upon the rest of the commons farming community. 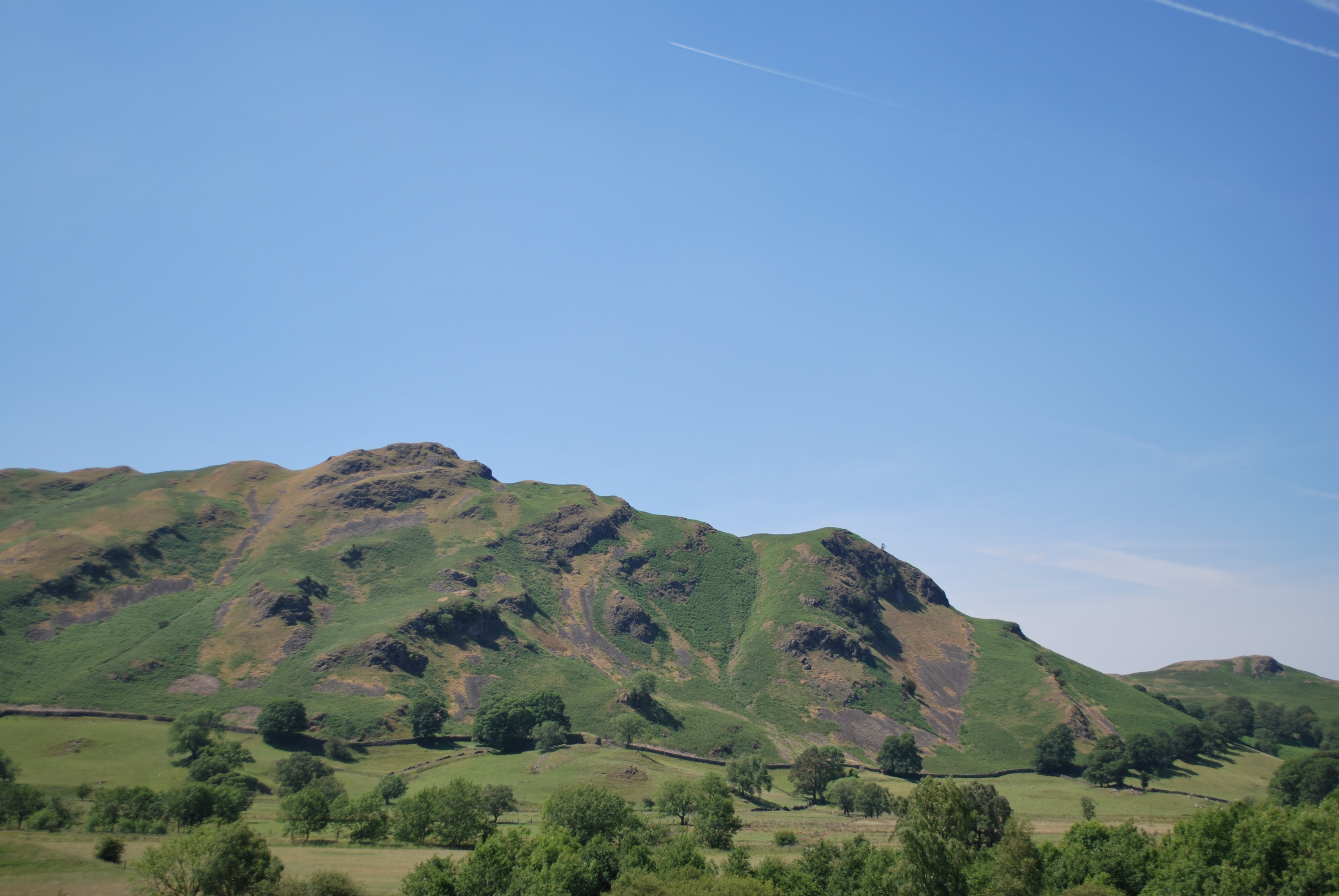 Like the Herdwick sheep, farmer’s  knowledge of the heft is passed down. “There is no value attributed to local knowledge, if you remove the livestock from the hills, you remove the labour, and then you remove the next generation. There won’t be a way to replace what is lost. This is a living and breathing, management of the landscape, it is intricately delicate and fragile yet extremely tough and hard wearing. It requires a sense of intuition and graft. The newer generation’s work ethic has greatly reduced – but hard work is what pays. If you take young farmers out of the landscape, you are stripping it of its true capital”.

The stocking density of sheep is a  hot topic. The upland hill farmers are adept at the processes of producing grass for grazing. For grass to grow abundantly, it needs to be consistently grazed. Here, if the density of sheep on the commons is too low, then the acreage per sheep is too big, grazing becomes ‘patchy’ and pioneering species such as docks and bracken increases to eventually reduce the amount of grass available. Balance  is required - the farmer needs a specific ratio of sheep to maintain the upkeep of the system. However, if there are too many sheep then it becomes a questionable environmental issue.

Monbiot vs No Change

The term “sheepwrecked hills” was coined by George Monbiot in his writings depicting his views of the “biodiversity desert” that is the upland hills. Throughout my journey his name occurred prolifically and the feelings attributed to him came with either esteemed praise or a spit on the floor. He cuts a divisive figure.

In short, Monbiot and the rewilding group wish for sheep to be taken off the landscape and to allow the hills to return to a ‘natural state’. There is merit in the idea at a conceptual level, but pragmatically this involves dealing with people who don’t want that to happen, and their resistance has its dignity.

On Tuesday, I met with Dr Lois Mansfield of the University of Cumbria along with Kate Rawles, author, adventurer and campaigner. Lois was keen to give a vivid picture; “There is a vociferous aura around rewilding. There are some within the movement who understand the complexities, yet the ones who speak the loudest are extremists who drown out the realists… Farming communities are turning inward, they are feeling under attack by environmentalists. Since the 1980’s there have been two opposing forces between farming and conservation and that has eroded the middle ground”. Kate added, “There was a conversation between the tribes of ecology and sheep before Brexit. Trying to work together, but now, Brexit has changed their focuses”.

Is this what we want our society to be about? Two polarised camps at each other? Adam Day of The Farmer Network, says simply; “it has to stop, we are both on the same side”.

Kate advises that we reflect upon what is it, as a society, do we value? She asked me the pertinent questions; “What is sheep farming for if no one is eating the meat? Or using the wool? And why we are paying for it through subsidies? What else could that land (and money) be used for?”

Isaac Benson from the Farmer Network takes the sentiment further, “The answer is a balanced landscape. We need to combine practical reality with the foundation of a solid environment. If family farms disappear, it will be the end of conservation and we will be in a food crisis. In society, the Farmer is considered a land agent, but one farmer can provide up to 40 services.  Having to renew farms once they are lost, has a cost that the public purse cannot afford. We have to get this one right, otherwise it’ll be beyond disrepair …There needs to be food as our population is growing – we’re going to need farmers. This them vs us has to stop. Farmers are the best hands to lead us into the future. They are strong enough to carry the burden of many demands. But we need a platform where we are believed in and can continue to do so for the future generations”.

Environmental Management Schemes exist to attempt to find this balance, but they have been designed by people without the hands-on experience of site. Sheep farmer John Rowlands told me how this has had a specific negative effect to him; “we planted 55ha of trees in a fenced off area and the trees struggled to establish themselves. With trees, you are often either working with or against them and I was unaware of the impact they had on the sheep. Where the trees were placed blocked the sheep’s grazing path, they naturally decided to move to the next valley instead of going around the fence – they saw it as an obstruction. This affects my work and my neighbours. The design of the scheme wasn’t inclusive, I wasn’t able to adjust the design, it was in the middle of the heft. To put up fencing (or pretty much anything) in the Commons, you need permission from the secretary of state and all stakeholders must be consulted, which is a long process. I’m stuck with it if we want to remain in the scheme”.

Isaac adds, “I have to comply with the vision of Defra and the National Trust. In order to stay profitable I have to forfeit my identity. We have identified that sheep don’t belong here. Do we?”.

It is easy for you and me to look at our work with  a sense of separation. Even if we love it, we leave it in the evening. And here’s the crux; upland sheep farming isn’t a vocation, it is an identity.

Upland hill farmers have spent all their living existence ‘bide to the landscape’, through repeating tales of their forefathers, spotting a rare bird in the sky on a quiet mundane morning, socialising at busy auctions, drenched wet through pulling out a lamb to save the ewe’s life – there is a deep connection to the land, one built of love. Through a life lived in this way, they have forged their identity, this is their reason for existing, the ‘why’ in their being.

This same sense of identification of self is also true to the wider community whose immediate landscape shaped their upbringing, and this is the reason for  the Lake District being a ‘Cultural Landscape’ in the eyes of world heritage, it lives in the minds of those who live and visit the region. And it is true of the Environment groups that define themselves by their identity; the identity of virtues. They reflect upon themselves ‘as good’ by the deeds that they do and the values that they uphold. Yes, it is important to have virtues and strive for a greater sense of societal enlightenment, but should it come at the expense of tolerance and pragmatism?